Showing posts from September, 2013
Show all

What's New on the Needles?

... The Fair-Isle Jumper, by Stanley Cursiter, 1923.  Sir Henry Lander's painting of the Prince of Wales, 1922.   Girl in Fair Isle pullover, 1930s.    Jessie Rattar holding a bird chick.   Man and woman on Norton motorcycle. Woman wearing allover Fair Isle jumper.   Woman, wearing Fair Isle patterned tunic style jumper with OXO patterning. Most of these images are from the Shetland Museum's Archives. I love pattern .   No really.  I truly, profoundly love pattern .  I find it thrilling to the extent that I almost never talk about it because if I did, I would quickly become as glassy-eyed and tedious as any other fanatical zealot .   Leave me alone with some simple geometric shapes, and I'll lose myself in their mysteries for hours. And for quite some time, I've been thinking about the patterns in traditional Fair Isle knitwear.  I've had this crazy idea about making a garment for myself, entirely
6 comments
Read more

Thanks To You, We Did It!

...   I wish all of our blog readers could have joined us on the BORP ride today. It was perfect.The weather was balmy, everyone was smiling.  (I had a massive amount of anti-inflammatory medications pumping through my veins to help squash my latest sinus malady.)  The vineyards were fully ripe.  What more could anyone have asked for? As usual, there were all sorts of folks, riding all sorts of specialized cycles.  There were the usual mix of elite athletes, mid range cyclist, and severely disabled people all having an utter blast.  That's what's so great about BORP:  it gets everyone out, doing something physical. This year, BORP reached out to various cycling organizations, and we had particularly wonderful volunteer mechanics stationed on all of the routes.  As we were getting ready to pull out, the volunteer mechanic on our ride was scrutinizing the bicycle-built-for-three, and tut-tutting over the state -- and unconventional size -- of one of their wheels.
2 comments
Read more

Thanks To You, We Ride!

September 27, 2013
... Here's a sweet little video that sums of why Robb and I raise money to support BORP (The Bay Area Outreach and Recreation Program).  This woman has been paralyzed for over thirty years, and is enjoying cycling for the first time since her accident. Look how much fun she's having!  She's riding one of the many (many!) specially adapted cycles that BORP has at its cycling center.  It wasn't so very long ago that Robb and I were doing this exact same ride , on wheels that BORP provided.  Since then, Robb has cycled about five thousand miles.  Not bad for a paralyzed guy, huh? Serious, we cannot thank everyone enough for helping us support the great work that BORP does for people with disabilities -- kids, veterans, seniors, all kinds of folks participate in BORP's programs. While we're deeply grateful for the larger gifts, I can tell you that I'm particularly touched by how many people gave ten or twenty bucks.  Every little bit helps!
Post a Comment
Read more 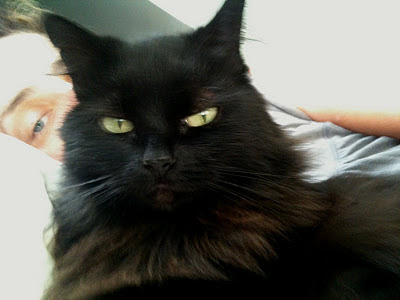 ... Linguine says, "I don't care how sick you're feeling, Lisa, you have a big fundraiser this weekend, and you haven't met your goals." How about it, can you help us support the great work that BORP does?  Click on the link on the right to donate or click here . Every little bit helps.
1 comment
Read more 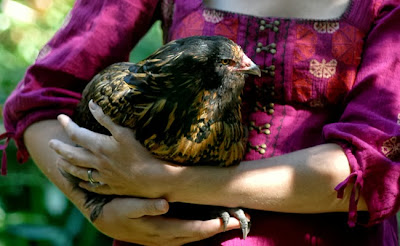 Our thanks to Cath for directing us to this article in the Wall Street Journal. Martha and Lulu. Photo by Joshua Kristal Lisa's sister Martha, who is one of the new urban backyard chicken pioneers in Brooklyn, New York, frequently gets interviewed about her flock.   She gives great advice on her website: Brooklyn Feed .  Martha's a terrific spokesperson for urban agriculture. Sensible, practical. Today's Journal article, begins with her comments on the difficulty of finding veterinarian services for poultry in New York City, and then goes off into the (for some) crazy world of people spending thousands of dollars on vet bills for chickens and then the completely absurd land of... well, I'll just quote: Dolly sleeps in a basket near her owner, has her own Twitter feed and travels in a Ralph Lauren tote bag.    "She laid her first egg in the bed of a Ritz-Carlton in Atlanta," Mr. Brown says.  A spokeswoman for the two Ritz-Carlton hotels in Atl
1 comment
Read more

.... Last week, while I was sick, I got it into my head that I wanted to improve my handwriting.  My printing is fine, but my cursive writing looks like I'm still in grade school. I didn't just want to learn to write more clearly, I wanted to learn to write like someone from another century.  Because, that's what any normal person might want to do. I thought that something like English Roundhand or Copperplate would be a nice starting place. I did my research, found an inexpensive fountain pen that could offer enough flex to simulate the writing style I had in mind.  I spent more time that I'd like to admit fine-tuning the pen's nib, in an attempt to get the mark I envisioned. And within twenty four hours of owning this pen, I had broken it. I just can't own nice things.  And I still write like an uncoordinated child.
6 comments
Read more 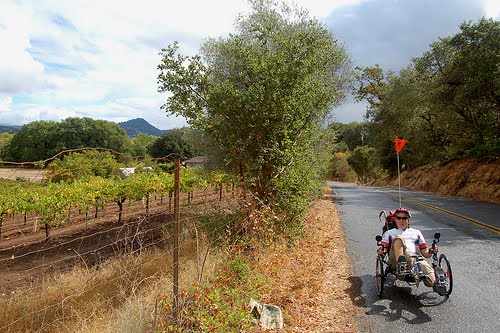 If you've been following us for a while, you know our annual cycling event to benefit BORP is coming up.  Each autumn for the past 6 years we join a special group of people to support sports and recreational activities for young people with disabilities.  We ride over several courses through the beautiful landscapes of Sonona County, California, each according to our abilities. There are Paralympian medalists, triathletes, world-class cyclists and local cycle clubs who will ride all day to cover a hundred kilometers.  There are casual bike riders and handcyclists, recumbent trikers, visually impaired riders on tandems, all of us struggling to reach a personal goal of 25 or 50 miles.  There are children and adults cranking or pedaling or pushing whatever wheels they've got to cover the ten mile ride.  This is the great thing about BORP: They can get nearly anybody moving and participating. This year will be a little extra challenging for us.  We've been bu
Post a Comment
Read more

... After a lengthy weekend, spent sick on the couch, I've got two bits of insight. First: I'm the World's Slowest Crochet-er. And Second:  Julian Fellowes (creator of Downton Abbey) must have an amazing lawyer, because he shamelessly plagiarized the plot points of Upstairs Downstairs.  I'm not talking about the larger social issues, but about very specific story lines.  The unrequited and fatal love affair between a naive kitchen maid and a footman named William? Yup. Right there. And while the maid in the original series wasn't named Daisy, the entire cast of servants was belting out exactly that name, as they all bellowed Bicycle Built for Two during the discover of the death.  Not convinced?  What if I told you there was a story about a gay footman who carries on an affair with a nobleman who is pretending to woo the daughter of the house?  Or how about the fact that the unethical servant of the house is named Thomas? What about the suffragist dau
3 comments
Read more

... Both Robb and I have some sort of mystery cold, whose major symptom is mind-numbing lethargy.  We've been sacked out for a couple of days, unable to do much of anything.  I'm finally feeling well enough to knit, and have been chugging away on my sweater.   I'm using a beloved vintage ski sweater as the template for my project.  Hopefully this will bypass the heartache of spending countless hours creating an ill-fitting sweater.  The original vintage ski sweater has some interesting features, most notably the T-shape of the main body of the garment. I'm convinced that the original cardigan was machine knit, and then the pieces were cut to create shaping.  That would be more like making a sewn garment -- the fabric is created (usually in long straight panels on a loom), then cut and then assembled into its final shape.   In knitting, the shaping is generally done concurrently with the creation of the fabric.  There are a variety of technical reasons for doing
4 comments
Read more

What Ever happened to That Sweater?

... I'm still plugging away at this sweater. I've finished the main body of the garment. I still have to cut open the "steek" and knit a neckband, a button band, and the bottom ribbing.  At the moment, I'm working on the sleeves. In order to have symmetrical color transitions, I'm knitting them both at once, as one large tube.  The striped section is the "steek" where I'll cut the knitting when I go to assemble the finished garment. I've swapped the foreground and background color.  I've also added a little length into the pattern repeats, inserting one stitch at the top and bottom of each diamond motif.  I think this will add interest to the project. I feel like I've been working on this forever, but that's really because this summer was so hectic, that I didn't have as much down time as I would have liked.  Darn that pesky employment, anyway.  Always getting in the way of one's knitting.
3 comments
Read more

This past week the eastern span of the Bay Bridge opened. Since Robb and I moved to California this bridge has been under construction and under a cloud of controversy. I'm happy to say that the bridge is a beauty, and that Robb and I were quick to try out the new and almost-completed bike path.  I imagine that the entire bike lane won't connect to Yerba Buena and Treasure Islands until the old bridge is demolished. Because I'm working on Saturday, I had the day off on Friday.  We figured that every single person with a bike would be trying out the bridge this weekend, so we scampered over as quickly as possible. The weather was dazzling, and every cyclist on the bridge was grinning like crazy.  The pedestrians weren't quite as giddy, because the downhill slope didn't make their six mile walk any easier.  The climb up is steady and gradual.  And holy moley!  The decline is a huge amount of fun.  Typically, I'm very cautious going downhill too fast on m
7 comments
Read more 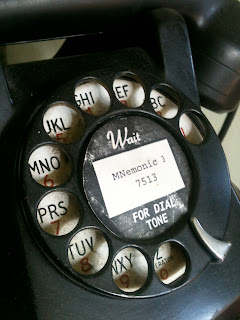 We've been getting a string of wrong numbers lately and it's heartbreaking. The calls are eerily similar: a polite and very direct, female voice on the other end of the phone says hello and immediately tells me how many children she has and that they need a place to stay.   Apparently, our number is being given out by some agency or other for housing or sheltering services. I try to break in as quickly as I can to let them know they have the wrong number.   I find myself wishing I could be the help they're looking for, though. There is something so immediate and human in this simple, specific call for help.  All I can think about are circumstances that must have led up to that call, the courage it took to pick up that phone. I don't have any way to help them right now (I'm trying to track down the number they should have been given) but my reaction has given me a bit of insight.  The next time I need help from someone, maybe I'll be a little less
3 comments
Read more
More posts