Showing posts from July, 2010
Show all

... Friday was a sad day, because I spent most of it helping Sheri and Kyle pack for their move to Portland. At the end of the day, we walked over to the vacant house next door and picked a bag-full of fruit. Today, while Sheri and Kyle were driving north, I taught myself to make meyer lemon marmalade . Want to learn how? It's remarkably easy. You'll need six cups of chopped lemons. Cut the ends off of the lemons, and then slice them into segments, and then small triangles. As you're slicing, remove any membranes that are easy to get to, and save them and all the seeds. This will be a source of pectin, which will help your marmalade jell. Tie the membrane and seeds inside of a piece of cheesecloth and toss this into a large stock pot with the six cups of lemons and six cups of water. I buy cases of medical grade cheesecloth for work, but you can get regular cheesecloth at the grocery store. Depending on how fine or loose the weave is, you ma
8 comments
Read more

Attack of the Killer Tomatoes

... This summer which should have been memorable as the First Summer we Spent in Our House, has instead turned into The Summer of Itch. (Which, I'm realizing, rhymes with "son of a bitch.") I have had an almost continuous rash -- with miserable itching and revolting-looking hives -- for the last two months. I've also been doped out on antihistamines, which means that I'm even more weird and boring than usual. What a summer. Although I had been to my primary care doctor about this rash, it wasn't until today that I met with an allergist. She was utterly delightful, and I hope that I struck the right balance between having being a well-informed patient, and not having freaked myself out by doing online medical research. You know what I'm talking about, right? You start reading up on your symptoms, and before you know it, you've fallen down some rabbit-hole of Internet Craziness. And if you aren't careful, you'll inadvertently look at
13 comments
Read more 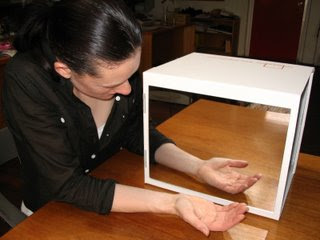 I was talking with a friend of mine at the pool today. She was formerly a regular in our time slot at this pool, a session mainly attended by disabled people and octogenarians. It had been a while since I saw her there. I can never tell if a person's long absence is a good sign or a bad one-- either they are doing well and don't need pool therapy or they're having a hard time and just can't make it. Turns out my friend falls into the not-so-good category. A few years ago her shoulder was badly injured in a motorcycle crash and ever since she has experienced severe neuropathic pain in her arm. She says that the slightest touch can make it feel like her arm is held over a fire, buried in ice or ... In short, the most excruciating agony you can imagine. The currently available treatments for this condition, unfortunately, are notoriously unreliable and must be tailored to each individual patient. Basically you keep trying things until something works. For my frie
6 comments
Read more

... On Saturday, we hosted the end-of-race party for a group of letterboxers who had been participating in a two-day "Amazing Race." Everyone had a great time, both the cheering locals, and the road weary racers. Robb and I cooked liked maniacs, making fresh backed bread, and all sorts of savory salads. (I cannot believe that I had never made a potato salad prior to this weekend.) While I consider myself a decent host, I tend to be a bad guest at my own parties, because I'm trying to keep everything running smoothly. Although I filmed all the teams crossing the finish line, I totally failed to take any photographs. So, instead, here's a photo from the same park, back in 2006. Robb is in the early stages of his recovery from his spinal cord injury. Has was home after his long stay in the hospital, and working on walking. He was in a lot of discomfort, and extremely weak. Tasks that most people would consider incredibly simple were huge, exhausting event
7 comments
Read more

... Garden experts, can you tell me what's wrong with our Hungarian Heart tomatoes? The plants are somewhat yellowish, and have produced loads of flowers, but very few fruits. And today, I noticed that the tomatoes have black patches on them. The fruit is firm, but as this is supposed to be a red tomato, I realize that something is wrong. We've read a little bit about tomato diseases, but can't figure this out.
10 comments
Read more

Let's Get This Party Started!

... As I type this, forty-some letterboxers are racing from Portland Oregon to the San Francisco Bay . I'll be helping to host the post-race party. I've never had to provide "real" food for so many hungry people. Today is a day of shopping and cooking. I hope the racers like what we provide.
7 comments
Read more

The Garage Mahal (or, what I did on my summer vacation)

... When Robb and I first looked at our house, just about a year ago, the garage was in sorry shape. The paint was flaking off. It was leaning at a dangerous angle. And the roof was on the verge of caving in. Everyone advised us to tear it down. Over and over again, we heard, "who wants some old wooden building, when you could have a nice metal shed?" Robb and I just smiled and nodded. And gave each other The Look. This is the look that we gave each other after contractors suggested replacing our plaster walls with sheet-rock, or suggested installing a drop ceiling to cover our old coffered ceiling. Robb and I would put on our best inscrutable Mona Lisa smiles, and make eye contact for the briefest moment. We wanted a historic home. Not some re-muddled mess. What we found so bemusing was how the contractors would say things like "Wow, they don't make houses this nice anymore," and then launch into their proposals for horrendous "improvements.
24 comments
Read more

Dive into the Hive

... Ready for another tour of our bees' hives? We've been taking a slightly different approach to hive-inspections, meaning that we take the whole stack of boxes apart, and work from the bottom, up. We were finding that starting at the top made bees really agitated. We often weren't getting through the entire inspection, because the bees were getting so pissed off. Since the queen tends to lay eggs in the lower boxes, we get to see the status of brood production before the bees get too annoyed with us. This is the first thing we saw when we opened the lowest box. Wax comb bridging between a frame and the hive wall. The bees seem determined to ignore the architecture of the hive, and have been building structures that span across the frames. Like this. And this. I'm not continually writing about this because I'm some sort of compulsive neat freak. (Stop laughing.) I keep coming back to this subject because when the bees build their wax in a way
5 comments
Read more

My Apologies to the Cats 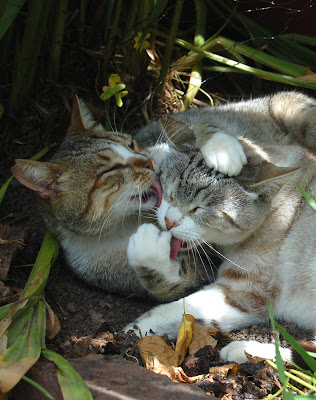 ... Blog readers may remember the excruciating rash that I had for the entire month of June. I was fairly certain that it came from contact with tomato plants, but the doctor I visited convinced me that it had come in contact with poison oak, by way of the feral cats. Since that time, I've been washing my hands and arms like a maniac, every time I pet the neighborhood cats. I feel like Lady Macbeth, with a tube of Technu. The cats, of course, are clean as clean can be. And it really is unlikely that our little neighborhood supports poison oak plantations. As it turns out, the tomatoes are the culprits. The other day, I was tying up our gigantic tomato plants, and I neglected to wash my arms after I finished. Some green tomato sap got on my arms, but I didn't realize it at the time. In the morning, the sap was still there, and under the sap stains, I had that same familiar itchy bumpy blotchy rash. Tomatoes are evil. Tracking down allergies is a tricky busines
12 comments
Read more

... You might imagine that since I'm a professional painter, I'd have our little house painted, in no time at all. And you would be mistaken.
7 comments
Read more

... Our tallest tomatoes are six feet tall! Robb admitted that when I asked him to build the bamboo tomato cage, he had his doubts that the plants would require such tall support. Other than the Green Sausage tomatoes, which are weirdly tiny, the plants have lived up to my dreams of tomato vigor. The Hungarian Heart tomatoes are frustrating. They produce huge fringed flowers, but so far haven't set any fruit that I can see. I really don't know anything about these plants, and bought them as a sort of verbal self-portrait. We'll see how that turns out. There are plants on the other side of the tomatoes -- beet, leeks, beans, and ornamental sage for the hummingbirds. The beets and the chard are having a tough time. We've got leaf miners, so I keep cutting away their leaves. One of the beets started to bolt, but when I picked it, it was undersized. I wonder what's going on. We had our first chard today, on pizza with crust that Robb made from scratch.
12 comments
Read more

Visiting an Experimental and Historic Farm

... If you've ever eaten a McDonald's french fry , or admired a Shasta daisy , or savored a Santa Rosa plum , you've enjoyed the work of plant developer Luther Burbank . Robb and I will be visiting the site of Gold Ridge , his experimental farm, with the California Rare Fruit Growers on Saturday. We're tagging along on a tour , which is open to the public. We certainly aren't growing any rare fruit at our place. Yet. Our fruit trees are pretty much the Usual Suspects, which includes the Santa Rosa plum which he developed. I'm not complaining. I'll trade common, mature trees, for exotic twigs any day of the week. Sorry this is such a dud of a blog entry. I've got a terrible headache and can't focus. Here's the best Luther Burbank link, ever.
3 comments
Read more

At the Finish Line

... Northern California Letterboxers! Please contact me about the finish-line party for the Amazing Race. lazar . bauer @ earthlink . net Everyone else, please carry on.
1 comment
Read more 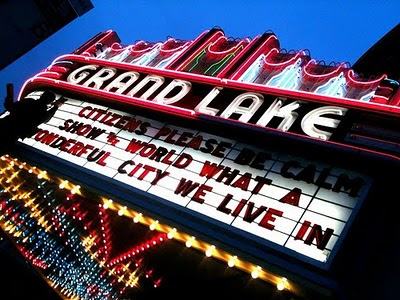