Showing posts from September, 2016
Show all

Lisa has been busy at work lately.  Here's a glimpse of what she and her team are up to: This little film by Joel Dockendorf is a fantastic window into the work that goes into making a scenic backdrop.  Of course the days and weeks of planning and painting that go into it are compressed here into a minute or so but the hard work and skill of Lisa, Lassen, Yoshi and Anna McGahey (not pictured) really shines through.
1 comment
Read more 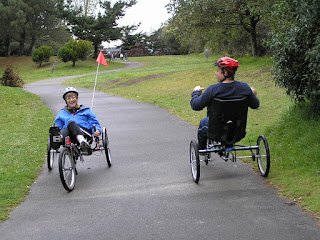 Shortly after my accident, (it feels like a lifetime ago) during my weeks in the rehab hospital, I remember a therapist said something that stuck with me.  It was a simple yet audacious suggestion and I clung to it like a lifeline.  He asked me to imagine a time in the future when "you are stronger than you've ever been." At the time I took "strong" to mean resilient or mental toughness. What else could it be? In that moment I could not take a step, could not stand, could not even sit upright for very long.  But I held on to that phrase.  It was an outcome to focus on. Some time later, I thought back to that moment when I met some of the athletes with disabilities at BORP .  These people were the definition of strength.  Many of them had seen a lifetime of struggle–– emotional, physical, psychological, social, financial, you name it.  They don't seek to be inspirational. They're not trying to set a good example–– they're just living their live
Post a Comment
Read more
More posts