Showing posts from September, 2010
Show all

A Total Lack of Dignity

... It's been two weeks since I found this little kitten, staggering in the gutter, near our house. Admit it: you're laughing at these pathetic photographs. There's nothing scrawnier than a cat's neck, and this little guy is only just now growing back the fur he lost during his flea infestation. Robb is convinced that everyone is going to think that these are photos of a dead kitten, so I'll leave you with a cute photo. Napping in the sun with his Big Uncle Sleeves. Look at those smiles!
17 comments
Read more

. Our little kitten has been to the vet again and he's doing better. The prognosis is good and, once we figure out the right combination of food and softeners/laxatives for him, it will be better. Here he is being fascinated by a segment on the "Life" DVD about sea snakes. We're not sure if he was captivated by the wriggling or David Attenborough's narration. He spends a good deal of time napping and wandering around our garden (the cat, not David Attenborough) and seems to crave the approval of Cardigan and Sleeves who we have begun referring to as "The Uncles". The Uncles We still haven't given him a name. I guess we were waiting to see if he survived the first week. For now, we just call him "The Little Dude".
9 comments
Read more

... Do you remember two months ago, when I bought an antique spinning wheel ? Well, somehow, I found myself in possession of a second one. (Really, Mom, it just followed me home.) I've been trying to learn how to spin. A neighbor came over and kindly gave me a private spinning lesson, as well as some lovely yarn to practice with. Since that time, I've been plugging away, trying to figure out this ancient craft. The spinning wheel is an incredible machine. It just wants to work. I'm merely along for the ride, at this point. There's a convention when photographing hand-spun yarn, to include a coin in the photograph for scale. Since I'm such a rank beginner, I'm assigning no value to my yarn.
9 comments
Read more

Gardening as a Form of Optimism, part two.

... This summer, I developed something called Oral Allergy Syndrome. This is some kind of freaky uber-allergy, where I am apparently unable to eat anything but cabbage. All other foods make my tongue sizzle and some foods -- the really yummy ones -- make my throat and ears close up. I've been living in a Benadryl haze, and worrying about scurvy. (Okay I'm -- mostly -- kidding about the scurvy.) The summer's tomato harvest was coming to a close, and I decided that even if I couldn't eat tomatoes at the moment, I would preserve the tomatoes for another time. Hopefully, this allergy nonsense is a passing phase, and I'll be able to eat like a normal person again. I made two recipes: fresh packed tomatoes, and a tomato sauce. Here's what I did for the fresh tomatoes. I plunged the tomatoes into boiling water for just an instant. And then I dropped them into ice water. The recipes say to put the tomatoes in boiling water for 30 seconds, but I thin
15 comments
Read more

... The little cat that I found staggering alongside the road is still alive! We have been terribly worried about him, but it looks like he may be on the road to recovery. This tiny 3.75 pound cat may be as much as a year old, but he's a bag of bones. And unfortunately, his bones may be his biggest problem. At some point his pelvis was broken (he was probably hit by a car), and in the time since then, the pelvis healed in a distorted form. To put it bluntly, the vets were worried because his bones seemed to be obstructing his digestive system. He had a severe intestinal blockage, and could not defecate. The blockage, if not resolved, would have killed this kitten. So, the poor little guy had every non-surgical treatment imaginable. We were feeding him stool softeners and mixing pumpkin puree into his wet cat food. And we were waiting. Otherwise, he was quite chipper. His stumbling gait had improved, so that he was able to walk without collapsing every few steps. He
15 comments
Read more

... I was driving to the store, when I spotted a scrawny kitten, stumbling in the gutter alongside the road. Because I possess the Must Help Animals gene, I stopped the car, and scooped him up. The fact that he let me do this did not bode well. This little guy is in rough shape. He spent the night at the emergency veterinary hospital, and I spent an appalling amount of money. He's now living in our bathroom (and hallway). He was either struck by a car, or he was born with a freakishly tiny pelvis, or both. He can barely walk. His digestion is all messed up. He had such a severe flea infestation that he has large bald spots. His tail looks like the feline version of a balding man's comb-over. Most all the hair is gone, except for some long straggly strands. We don't know if he is going to live or not. But what I do know is that all I have to do is sit down on the ground, and he'll climb up and fall asleep on my lap. Please think good thoughts for this
16 comments
Read more 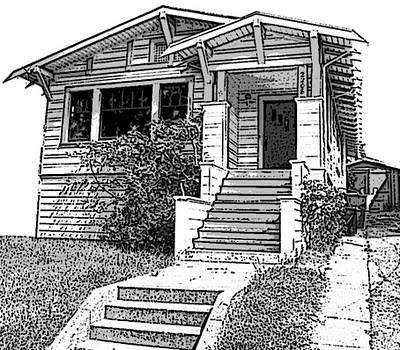 It's our first anniversary! One year ago tonight we were finishing up our move-in, seeing off our exhausted movers and wearily searching for the hardware to reassemble the bed so we could go to sleep. We've done so much to this little bungalow in the past year but I don't think we ever found all the bolts that hold the bed together.
5 comments
Read more

A Moment of Silence

September 11, 2010
... I haven't been in a mood to write of late. My work schedule has been tumultuous, and I've been wrestling with miserable (and out-of-nowhere) food allergies. Today, we're having a homey day. Even though I cannot currently eat any of the tomatoes that we grew in the garden because of hateful new food allergies, I'm drying and canning them, in the hopes that I'll be able to eat them in the future. Today is a quiet day, and I'm in the back yard, listening to the local sounds. A small plane is flying overhead. Finches are squabbling. The lilac bushes rustles in the wind. A raven croaks. My neighbors' banana bush creaks. An apple drops from my other neighbors' tree. A spoon clinks against a bowl. Dogs bark. The beehives hum. A pigeon hoots. I'm thinking about the silence in the skies, nine years ago.
2 comments
Read more

I'm Not Suggesting You Try My Method...

... We were shopping at one of the local architectural salvage stores today, looking at vintage lamp shades. I was stooping to look at shades on a low shelf, and when I stood up, I slammed into the edge of a glass shade so hard that I had to go sit down until the dizziness subsided. When I mentioned how dangerous this was to the gentleman ringing us up, he went and looked at the way things were displayed, and then only charged us for one of our shades. We've been in our little house for just about a year, and we've only just gotten past the bare-bulb-hanging-from-the-ceiling motif in the kitchen. The shade looks great in our 1940s kitchen, but the ceiling sure is squalid.
9 comments
Read more
More posts