Showing posts from January, 2011
Show all

... Last weekend was spent in the pre-industrial age. I took a hand spinning class, and collected rabbit manure for my compost. Robb and I bought a French oak barrel with the plan of turning it into a water cistern. Most excitingly, I went to a Scion Exchange where backyard orchardists and rare fruit enthusiasts shared cuttings of their plants with one another. The idea was that these precious twigs could be grafted onto existing fruit trees, and would in a few years, produce very special fruit. In the most simplistic terms (the kind I understand!) grafting is a method of asexual propagation, where one type of plant is manually attached to another related plant. A gardener might graft a young stem (scion) onto an existing plant (rootstock) for a variety of reasons. In some cases, the rootstock might be more vigorous than the plant that the scion came from. Or the rootstock might have dwarf characteristics, thus keeping the fruit from growing way up in the air, where it is diffic
5 comments
Read more

... This year, I am resolved to improve my sweater knitting. While I'm pretty good at making sweaters that look great on the hanger, I'm not very good at making sweaters that fit me particularly well. I am determined to change this. And of course, in my usual foolhardy bite-off-more-than-I-can-chew manner, I embark on this journey of improvement, by starting the most insanely complicated sweater imaginable . I should have started my explorations of fit with some seriously simple knitting. But no. That would have made too much sense. I haven't done a cable-knit project in years, and this one is a doozy. This stitch pattern requires my complete concentration, which means that I make all sorts of dumb mistakes, that I then have to fix. In fact, it wasn't until I saw this photograph on the screen that I noticed another screw-up. One of the rope-like cables has a mistake, but it's too far gone for me to fix without risking making a mess of the repair. There
6 comments
Read more

How to Knit a Beret

... While much of the last two months was spent moving the seventeen-thousand-foot warehouse/studio where I work, I did manage to do some knitting. I knit a series of hats for friends in cold climates. I chose patterns that were interesting to make, and hopefully not too corny or pathetic or home-made looking. (I'm mindful of the quilting book Erica bought me a bunch of years ago, entitled That Dorky Homemade Look .) I spent a bit of time knitting the type of hat that can either be called a beret or a Tam O'Shanter. Really. That blobby looking thing in the photo at the beginning of the blog post is a Larval Tam. And this strange thing is the inside of one of these same hats. These hats are knitted using two strands of different colored yarn. I knit one color at a time, letting the unused colored yarn hang slack on the back side of the work. What you're seeing in this photograph are the "floats" of unused color. I love how this shows the ghost of
15 comments
Read more

Robb's Adventures Down Under (the house)

January 22, 2011
Today, I am resting after spending several hours yesterday doing various projects in our crawlspace. It's a challenging place to work in. If you were 5'3" you could easily stand up in the crawlspace at the front of our house. If you were 2'7" however, you would hurt your head if you tried it at the rear. Whenever I go down there, I find myself just sitting and taking in the underpinnings, the wiring, the plumbing, etc. Usually, I'm marveling at the huge old-growth redwood timbers the house was constructed from. I try not to look too hard at the truly shoddy recent construction down there. Things I learned under the house: - If you dig a two-feet deep hole it will collect six inches of ground water. - A lazy electrician spent some time down there about fifty years ago. - The "Old Girl" has good bones. - Walking in a crouch is nearly impossible for me unless I grab my pants leg by the knee and lift my legs one at a time. - Unsupervised carpenter
6 comments
Read more

..... For maybe the third time in the eight years that I've been working at Berkeley Repertory Theater, I'm not working on one of our Monday holidays. The weather looks like it is going to be beautiful, and there's going to be a good low tide . Does anyone want to join us at the Fitzgerald Marine Reserve for an afternoon of exploring the tidepools? We'll probably shoot to arrive around 1pm, and will try to park in the main parking lot. You'll want to wear grippy waterproof shoes, and plan to get wet. A change of socks is always a good idea. We'll bring our books, so we can try to figure out what we're seeing. The more eyes out on the rocks, the more likely it is that we'll spot something really interesting. Planning a little further ahead, who wants to go to the California Rare Fruit Growers' Scion Exchange next Saturday? I've never been to one of these events, so I have no idea what to expect. If you're a wanna-be orchar
10 comments
Read more 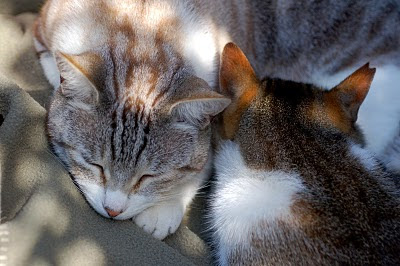 ... Robb was at the pet store the other day, when he noticed a flyer for a local no-kill animal shelter . This shelter has a program called " Garden Cats " which pairs extremely shy skittish cats with tenderhearted folks who will provide these cats with a home. These kitties are the ones too afraid of humans to make a very good impression at the animal shelter, the ones unlikely to find the courage to cuddle up on a lap. Because of their fear of humans, they are poor candidates for adoption. We read up on this program, and realized that we had been hosting Garden Cats, ever since we bought our little house. Here's what the shelter's website says: Island Cat Resources and Adoption has rescued a number of cats that, despite our volunteers’ concerted efforts, are not comfortable enough with people to become house cats. Although these cats are called ferals, they are not wild or aggressive, just extremely shy. They need safe outdoor spaces in which to live o
6 comments
Read more

Smog in the Garden 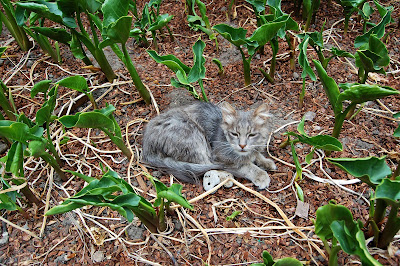 Back in September, I found a pathetic starving injured kitten stumbling alongside of the road. We kept him our bathroom, until he was strong enough to be exposed to other cats, and to nap in our garden. He was a bony, bald mess of a cat, who stumbled instead of walking. When we let him out of the bathroom, he would roam our house with a strange zombie-like intensity. He was terribly feeble, unstable and slow, but he'd never stop moving. We wondered at the time if the cat would ever display any personality. He seemed to exist in a sort of haze. This was one of the reasons it took so long to name him. Because his pelvis had been so badly damaged, because he was starving, and because he was anemic from his flea infestation, Smog was incapable of using his hind legs normally. When he wanted to get up on our bed, or the couch, he would haul himself up with his front paws. It was almost scary to see him do this. For being so weak, he had a ferocious intensity. He was like a
9 comments
Read more

The Year in Pictures -- Spring into Summer, part two 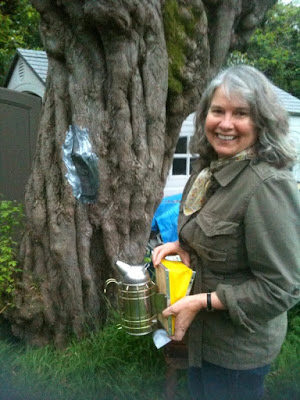 ... The Bees In late March of last year, I helped my friend and coworker Kitty dissuade some bees from making a home in one of her trees. Kitty and her husband were about to embark on some serious construction at their home, and didn't want to have honeybees bothering their contractors. I rigged up a one-way bee-door on the hollow tree that the bees were investigating, and the bees took the hint and found another place to live. We had some idea that the bees that were checking out potential homes in her back yard might be lured into the hive that Robb had given me for Christmas. I set the hive out in Kitty's back yard. And about a week later, I took it back, because I had the opportunity to catch a swarm of wild honeybees. (That's me on the right.) A member of the local beekeeping club had been observing a wild hive that lived in a hollow telephone pole near his home. When it threw off a swarm, he caught that swarm and gave the bees a home. When it threw o
4 comments
Read more

The Year in Pictures -- Spring into Summer, part one

... The Birds One of the greatest joys of our summer was gaining the trust of the Western Scrub Jays that visited our back yard. Many people dislike these birds, because they are very aggressive and opportunistic. They have bad manners, chasing other birds out of "their" yard. But we love them. We bribed them with stale almonds and peanuts, which they just adored. Whenever I heard a jay in the yard, I set out nuts. The birds started associating humans with yummy food. Eventually, we taught the birds to eat from our hands. It was enchanting. But them things took a bad turn. The backyard cats, Sleeves and Cardigan, started hunting the jays. They caught this baby jay, which I had to wrestle out of Cardigan's mouth. Because we couldn't find the bird's nest, Robb took it to a local animal rehab hospital. These little kitties may look sweet and innocent. Despite the fact that they're very well-fed, they're very efficient hunters.
3 comments
Read more

... I meant to post the second installment of our glance back at 2010, but a few things got in the way. For example, this evening our kitty Smog, who is allowed to roam in our back yard, disappeared. We followed the sounds of pathetic kitty-mewing, and eventually located Smog in a tiny crevice between our fence and our next-door-neighbors' back yard. I staked out our neighbor Manuel's yard, and Robb stayed on our side. The sun had gone down, and I since I was the one looking directly at our obstinate little cat, I had the flashlight. In the darkness, Robb somehow lost his balance and knocked over one of our beehives. After seemed like an eternity of making kissy-noises, I caught the cat. And then I lost him again when Manuel (who speaks only slightly more English than I speak Spanish) was trying to give me a bag of homegrown fruit. The cat freaked out, and ran right back into the crevice. More coaxing, a lot of patience, and I caught our Little Dude, for the second
7 comments
Read more

The Year in Pictures -- Winter into Spring

... January Ellen came to visit and we spent much of our time together birding. It rained a lot in January. The orchids liked the rain. Yes. We have orchids outdoors in January. The rain was good for mushrooms, like these tiny Bird's Nest Fungus. And these crazy things. They are called Cannonball Fungus, and they shoot their spores like artillery. Taylor started to split apart her honeybee colony. And Robb and I set up the hive he bought me for Christmas. We continued working on befriending the cats that came with our house. Robb is shaking hands with Cardigan while Sleeves averts his eyes from the sordid spectacle. February Robb built a rain-shelter for the feral cats. It was a huge success. Many naps were enjoyed in the Little House. "Hey you kids! Get off my lawn!" It was the Year of the Tiger. Once again, I participated in the Chinese New Year's Treasure Hunt. We had the dying mulberry removed from
11 comments
Read more
More posts