Showing posts from February, 2011
Show all

... A few weeks back, we got a package in the mail, filled to bursting with alpaca fleece. Apparently teaching one's self to spin on antique spinning wheels inspires fibery gifts from dear friends. In this case, the fleece came from our friends (and former landlords) Edwin and Virginia, who farm in Harford County Maryland. Edwin is a photographer, in case you couldn't guess. He's got a keen interest in traditional culture, and you should click here to see one of his books. My first thought upon opening a boxful of unprocessed alpaca fleece was something along the lines of "Hot Damn!" My second thought was "Oh crikey, what am I supposed to do with all this?" Look at that glorious alpaca fiber! Alpacas, unlike sheep, do not produce lanolin. There's no greasiness to their fleece. But that doesn't mean that unprocessed alpaca fleece is ready to spin. Alpacas are said to love a good roll in the dirt, and the Remsberg flock
6 comments
Read more

We Lose a Hive

... After a cold and rainy week, we had a break in the weather and took the opportunity to open up our weak Elizabeth Taylor hive. Sadly, and shockingly, the entire colony was gone. There were no live bees, there were no eggs, and there was no larvae. We saw a few dead bees, like this one, still latched onto various hive surfaces. No developing brood meant that the queen had stopped laying eggs, either because she was preparing to fly away, or because she had died. Did we kill the queen when the hive was knocked over ? We don't know. We didn't go hunting for our queen after the hive was knocked over. Opening a hive in the winter can be very damaging to bees, and neither Robb nor I are good at finding our queens. We thought that the best thing to do would be to leave the bees alone, and let them regroup. Disturbingly, we saw bees that must have starved as they were hatching into the world. An extended tongue on a dead bee is said to be a sign of starvation.
8 comments
Read more

... Rise and Shine! This is the weekend of our neighborhood's Annual Sunrise Tuba Concert . Silly me. I made plans for sleeping late, forgetting that exactly one year ago, the neighbors had hired an early-morning brass band. It's remarkable how loud a tuba a trumpet and one set of drums can be. It's really jarring to be knocked out of sleep by raucous tuba music. Apparently, my brain just cannot handle this as wake-up music. (But really... Who starts partying at 7am on a Sunday, anyway?)
4 comments
Read more

... Back when we first bought the house, we had a lot of work done. I'll be blunt, the bulk of the work was badly done. Our contractors were nice enough guys, but they were about the slackiest corner-cutters ever to wield a skil-saw. These were the guys who busted all the windows, and severed the electrical service while replacing the roof on our garage. These were also the guys who ripped off and demolished all of the old-growth redwood siding on our house, without our permission. I haven't written about any of this, because it dragged out as an ugly slow-motion legal dispute, and I always think it's prudent not to discuss pending legal matters until they are resolved. Well, all of that is behind us now, and those idiots didn't make us agree to not talk trash about them. So I'm going to say it. They sucked. They were reckless and lazy. The workers milked this job for all it was worth, and the contracting company played fast and loose with the terms of
11 comments
Read more 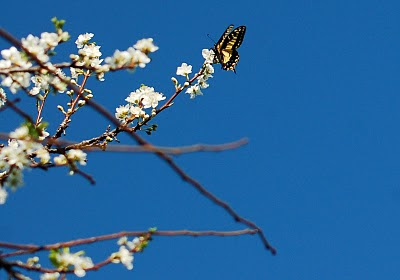 ... Our backyard plum tree is blooming! Of course, as usual, our honeybees are totally uninterested in the plum blossoms. I swear, I'm going to buy orchard mason bees next year. The honeybees are clearly more interested in food sources outside of our yard, and would rather not collect pollen from any plant that I'm taking care of. (I should also mention that I'm nursing a particularly miserable bee-sting. I guess there was a bee on the back of my shirt yesterday, and when I rested my forearm on my back, I crushed her, and got the full force of her venom. My normally Olive Oyl skinny arm is so swollen that it looks like it belongs to Popeye . It hurts like hell.) A few of the grafts that I did a few weeks ago have "taken." They've survived my clumsy treatment, and have the beginnings of bright green buds. Squint hard, and you can see a yellowy-green tip to the buds on the teensy-weensy twig. This, to me, is thrilling. Since I wasn't anticipating
6 comments
Read more

... While most of the nation was watching football, Robb and I were attempting to tackle a huge backyard project. Our yard was an utter disaster when we bought our house, and despite all the work we've done, most people would still consider the place a huge mess. Today, we teamed up to do something about one of the worst areas. Robb dragged out his chop-saw, and set to work, dismantling the huge pile of decades-old lumber that's been languishing at the back of the yard. He's several hours into the project when this photo was taken. Notice the green arc shape on the wall above where Robb is working. That's how tall the pile of discarded lumber was. In the front of the photo, you can see bundles of soggy lumber, wired together for ease of transport. We'll be scheduling a bulk trash pickup, as soon as we have all the wood cut up into manageable chunks. There's precious little worth saving in this heap. A few redwood boards, which miraculously have
5 comments
Read more 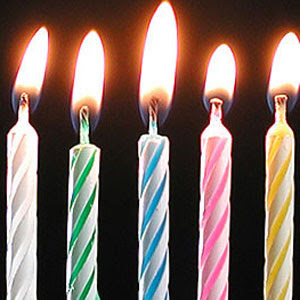 . Unbelievable. It was five years ago this week it all began . We've come along way since then but we will never forget the overwhelming outpouring of concern, care, and support we received in the days and months that followed that week. Thank You. Xīn nián kuài lè - 新年快乐 - Happy New Year.
6 comments
Read more
More posts