Moving the Furniture Around 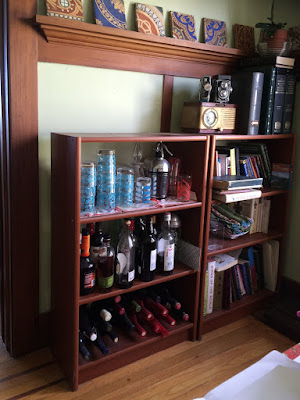 Robb and I have been enjoying the process of outfitting our little 1925 bungalow.  Slowly, we're finding furniture that's sympathetic with this tiny house.  It's challenging, because modern furniture is gigantic, and overwhelms our modestly-sized rooms.

To this end, Robb and I attend a lot of estate sales.  We joke that we have the taste of ninety-year-old college professors.  Mostly, we buy hand tools and kitchen stuff -- the sort of objects that make people say "they just don't make things like that anymore."

This weekend, Robb and I went a little crazy, and bought two tables.  (I know!  Buying tables!  I'm a Wild Woman.  Stand back, everyone.)

The challenge is to not overwhelm the house in crap.  So when we buy furniture, it's generally replacing something else.  In this case, we replaced two particle-board shelves with a glorious mahogany Art Nouveau table, and replaced a work table I salvaged from the trash at work with a truly lovely side table. 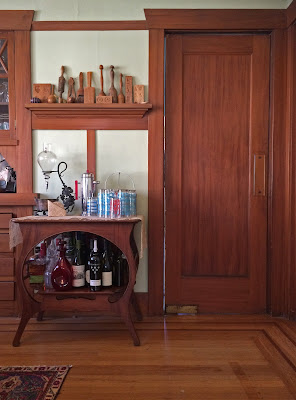 Nice, huh?  Of course this table is significantly smaller than the two bookcases it replaced, which started a weekend-long game of get-rid-of-crap.  We kicked up a huge amount of dust, and threw the whole house into disarray. 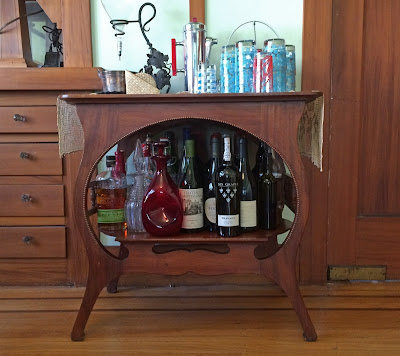 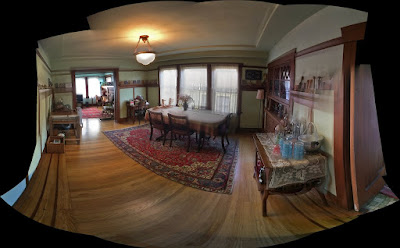 We totally broke down the (admittedly shabby) shelves, and put the craftsman-style writing desk in their place. We evicted most of the over-wintering orchid plants back into the garden, and moved the tabouret table out of the dining room, and back into the living room.  We put the new bar table where the tabouret had been. 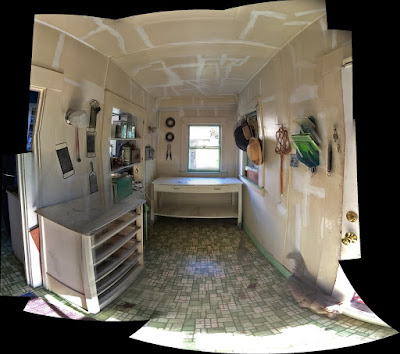 And then we tackled the pantry.  This room is one of the worst rooms in our house.  It's affectionately known as the Crap-Dumping Room.  It's the next room that we're going to repaint. And it's a difficult space.

Originally, this was intended to be used as a breakfast nook.  Robb and I really don't require two rooms for dining purposes, so restoring this room back to a breakfast room just seems silly.

But what can one do with a seven-foot wide room?  We had been using it for over-wintering tender plants, and storing jam and honey.  (The jam was scarily past its use-by date, and was taking up space, and making me feel all sorts of unproductive, negative emotions.  Not useful for either storage or my own peace-of-mind.) 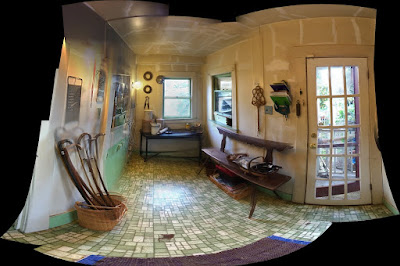 We gave the work table to our next door neighbors, and temporarily moved the dresser into the hallway.  The antique barrel that had been holding Robb's walking sticks broke apart into a pile of pieces, and will need to be repaired.  (I will always repair this barrel.  It is one of the few things I have from my father.  He left all his furniture to me and my sister when he died, but that's all still in France, and my stepmother has not spoken to us since his funeral.  If all I have are a few memento, you had better believe I'll be repairing anything that breaks.)  The bench is also from my father.  He gave it to me before he moved to France, mostly because it was too fragile for anyone to actually sit on.  Robb and I moved the bench out of our foyer, and are trying it near the back door.

This room really isn't working.  We can't articulate what we want to use it for.  It's very narrow, and has a lot of weird architectural features that get in the way of furniture placement.  We've lost a huge amount of storage in this configuration.  While it might look nice, it's not very functional.

I guess the first thing we need to do is repair and repaint all the walls and the ceiling in this room before we decide where all the furniture is going.  But it is sort of infuriating that I can't figure out how to make this room work. 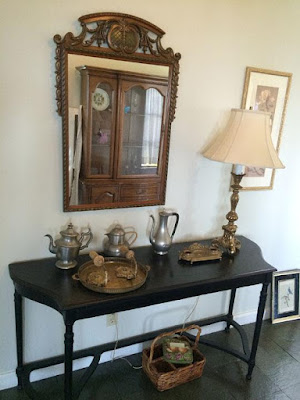 If you couldn't figure out what the table we are trying to cram into the pantry looks like, here's the photo from the estate sale listing.  Suggestions, anyone?
1925 cottage estate sales home pantry project

Anonymous said…
Add book shelves. Either along the top of the walls, in the corners, or along the green painted walls. And are you sure your dads furniture is in storage? Is it safe? Ship it back to you as soon as possible, I'd recommend, before it gets " lost" or walks off.

Emily said…
Reading nook? Table where the bench is (bench somewhere else in the house?), single shelf, above the window frames, circling the room for books, comfy chair in the far corner, little end table (with cute lamp) next to the chair.
10:19 AM

ChristopherJames said…
Looks like you've done quite a good job with your home. You'll slowly find the right units to go into the spaces that you want! Just keep at it and have your eyes peeled!
8:50 PM