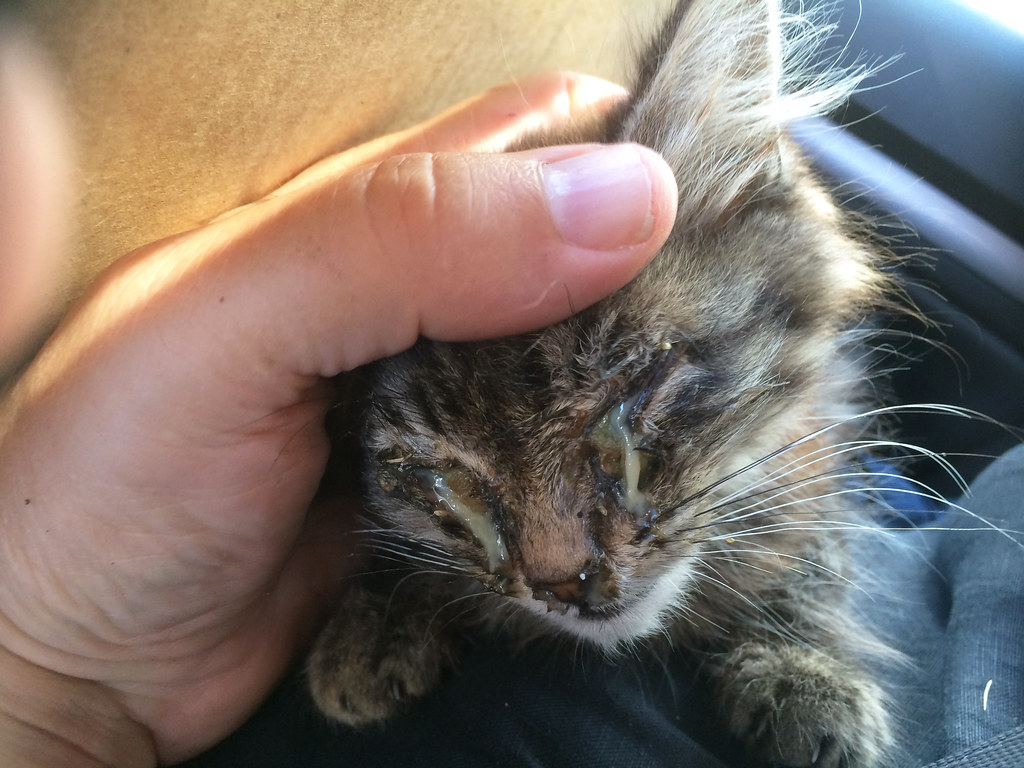 Robb and I were at our favorite urban farm store talking to Birgitt (one of the owners) about what to plant in the late summer garden, when Robb noticed a tiny kitten resting behind a garbage can.  Robb picked it up, and realized what terrible shape it was in.  I've seen a lot of distressing eye problems in cats, but had never seen anything as bad as this.  This poor little fellow was a bag of bones, and Yolanda (the other owner) noticed that there was something amiss with his legs.

Robb and I drove over to our veterinarian, to see what could be done for this little dude.  The kitten curled up in Robb's arms and snuggled for all he was worth.

And when we got to the vet, the news was bad.  His eyes were the least of his problems.  His legs were so damaged that there was really no hope.  Even if we attempted to save his life, amputations and thousands of dollars of surgeries would be the starting place for his treatment.

I have that crazy Must Save All Animals gene, but this was a kitten I could not help.  I'm just heartbroken about this, and feel a terrible sense of guilt. There was no hope, and we opted for euthanasia, which I know is painless (Robb and I were present at the end of our kitty Niobe's life, so we're familiar with the process).

I know that sometimes death is the kindest option, but I feel terribly conflicted for being responsible for ushering this kitty to its end.

Please everyone, cuddle your beloved pets extra hard.  And if you see a sad stray animal, stop and see if you can help it.

Gossamer said…
I was just speaking with a friend today about the option sometimes is the only option. Thank you for your kind heart in taking him over to the vet.
6:42 PM

Cricket-bug Corner said…
sad it couldn't be saved but at least it wasn't alone at the end. You are good people.
8:52 PM

Emily said…
Thank you for the peace that you gave this little one in the end- he would not have survived in either circumstance, but you prevented a lot of needless pain and suffering. I'm so very sorry for the hurt it caused you and Robb, but thankful that there are people that care enough to stop and help an animal in distress.
8:24 AM

Barbara R said…
I am so sorry you couldn't save this poor little one, but you are such saints for showing him such love and mercy. This act is the most difficult thing for us but peacefully ending suffering is one of the greatest gifts we can give animals. Thank you both for always being so kindhearted.
1:47 PM

Noreen said…
You did the brave, right thing for that little kitten. You and Robb are good people.
6:52 PM