While much of the rest of the country has been experiencing astonishing snowfall, California has been in the midst of a protracted drought.  According to the California Department of Agriculture,


Without water, the entire nation's food supply is in peril.  So, we were delighted to finally get some rain this past week.  One week of rain is not nearly enough to solve the water supply issues for the state, but every little drop is appreciated.

I've been alternately really busy and really sick over the past few weeks, and so it was pleasant to have a Very Quiet Weekend At Home.  I parked myself on the couch and knit and knit and knit.  I watched more television than I probably watched in the last six months.  I refilled my personal reservoirs, and perked right up.  (Have you seen Mastercrafts?  I highly recommend it.)

On Sunday, there was a break in the rain and I scurried outside in order to get some of of my fruit grafting done.  I had grafting wood languishing in my fridge, and the plum tree was just on the verge of blooming. I didn't get everything done, not by a long-shot, but at least I got things started. These short days combined with my long commute makes it impossible to do anything in the garden on weekdays.  Grafting in the dark?  No thank you. 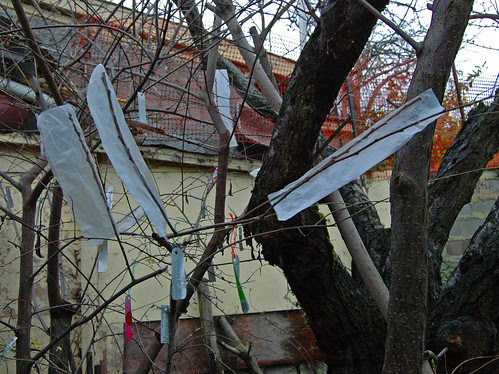 At the most recent scion exchange, the woman teaching the grafting workshop suggested wrapping newly grafted twigs with a particularly sticky type of cling-film, in order to avoid dessication.  If my mission was to make my garden look as insane and trashy as possible, I succeeded admirably.  Plastic wrapped branches coordinate very well with the used car parts that my neighbor has stashed on his roof, don't you think?  And we won't even speak about the World's Ugliest Fence....  It all looks exceptionally squalid at this time of year. 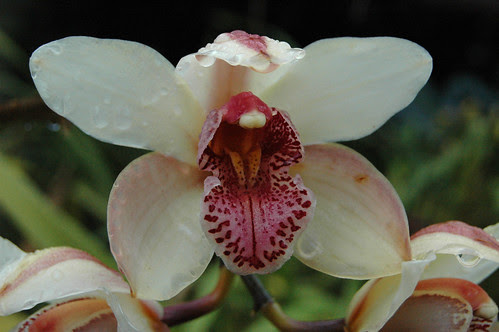 On the less ugly side of the garden, my massive new collection of orchids has started blooming.  I bought them for a remarkably good price at an estate sale recently. 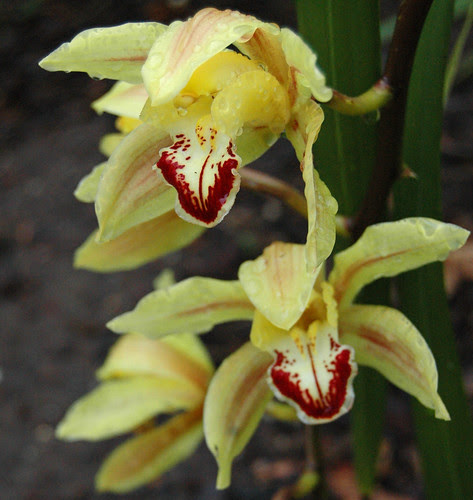 They've been badly neglected and will need to be repotted, but they're tough hardy plants, well suited to our climate. 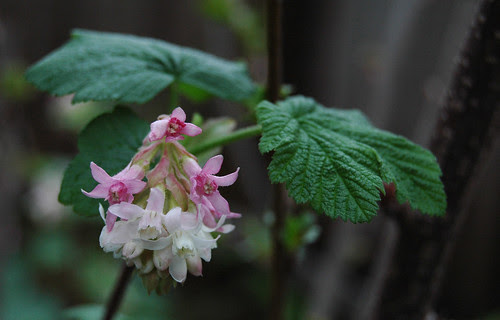 The native currants that I planted when we first moved in are blooming. 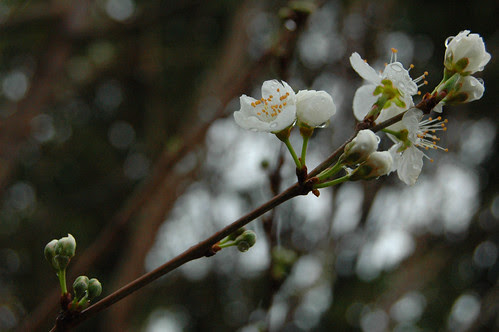 As is out pluot tree. As always, I'm hoping for a bountiful harvest. I'm finally learning not to panic when the fruit trees bloom in cold gloomy weather.  Every year I think we're going to have no fruit at all. And every year, I'm wrong. 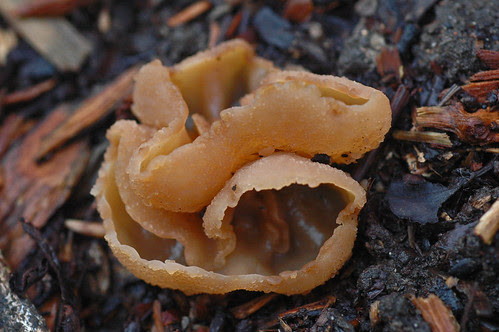 In addition to our flowering plants, we've got a bumper crop of fungus.  The spores for these cup fungi must have come in on some of the wood chips I put down recently.  I find their forms utterly fascinating.  I'm always delighted to see fungus in our yard. 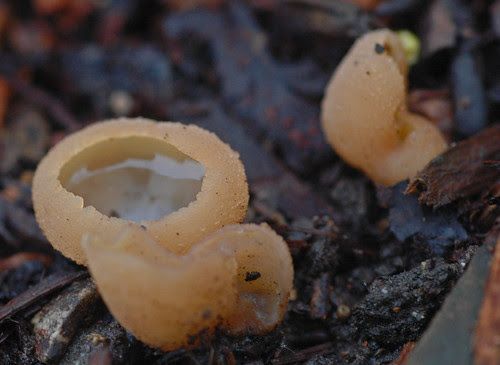 Clearly, these organisms are designed to capture as much water as possible. 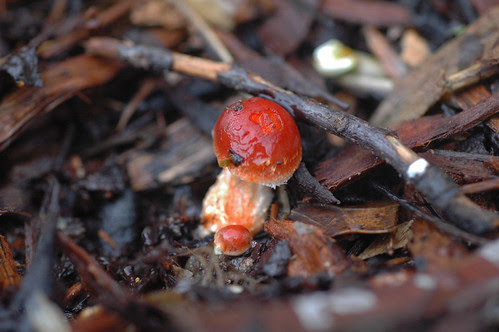 It looks like somebody had a bit of a nibble off of the top of this diminutive red mushroom.  I wonder if it was tasty or not?

So, that's what the rains have brought into our back garden.  If you want to read about the goings-on in other gardens around the globe, stop by Daphne's blog for her weekly gathering.

zippiknits...sometimes said…
My mother grafted plants, but she didn't do it quite like those. Yours are so interesting so robust looking. Soon they will lose their funky little coats and look much better than your neighbor's car parts! Sorry you were so sick but then you did get a lot of knitting done. :-)

Cristy said…
I want to learn to graft SO BAD. I really want to graft to my peach tree and my apple tree. I'd love to have 3 or more flavors from one peach tree. I love that you've been able to graft some.
10:57 AM

K said…
Your tree reminds me of bamboo wish trees in Japan. During Tanabata (the star festival) one of the fun things people do is write their wishes on pieces of paper, and hang them on a bamboo tree.

Those little grafts are much better than wishes.
3:26 PM

Marmalade said…
I thought that orchids rather liked to be crowded in their pots. They don't seem to be complaining too much - they look beautiful.
11:40 AM

. . . Lisa and Robb . . . said…
There's "crowded" and then there's "no dirt left, because the entire pot is full of roots." In some cases, one plants reached over to a neighboring pot, and sunk roots next door. It's pretty funny. But, yeah, they're tough plants.
12:50 PM 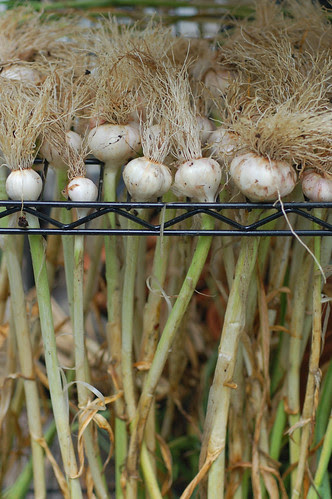