After a long hiatus, I've decided to recommence blogging.  And what better subject than a look into my two beehives? 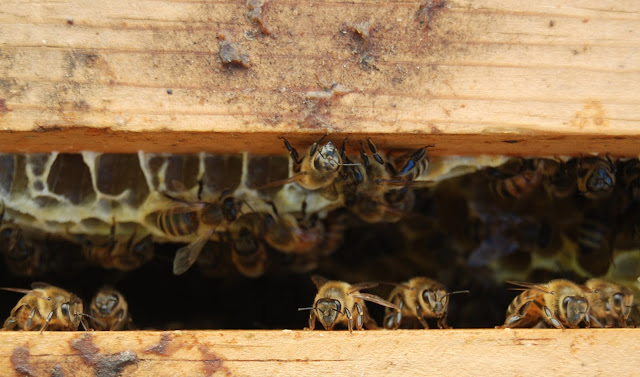 One of the two colonies that I'd gotten last year from Lori made it over the winter, but the other flew off in the early spring, leaving developing brood to starve to death.

A few weeks ago, I was able to collect a swarm from a nearby backyard.  So I was back in full-swing! 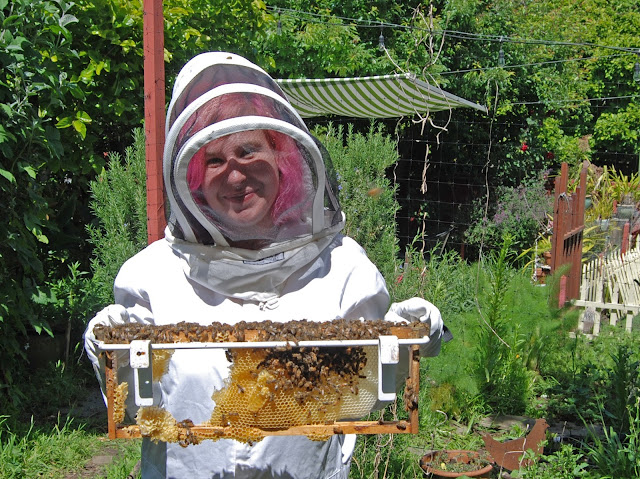 When weather and work-schedule aligned, I invited Lauren over for a tour through the hives. Lauren's grandfather had kept bees, and she wanted a chance to see how I managed my colonies. 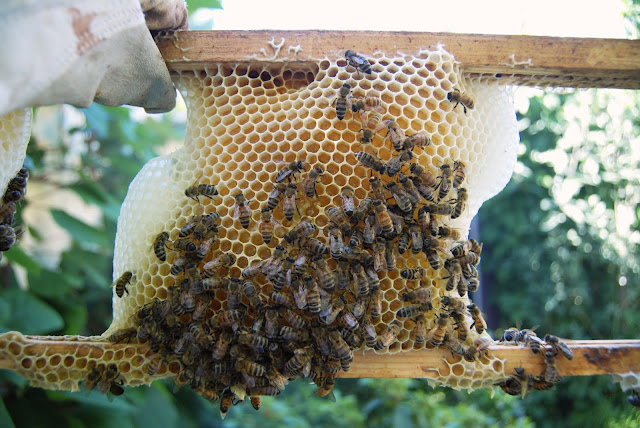 It wasn't a pretty sight.  The bees had been building their comb diagonally across the frames in the hive.  Removing frames for inspection resulted in a lot of damage.

(For readers unfamiliar with beekeeping, the hive is a lot like a file cabinet, and the frames are analogous to hanging file folders.  If the interior of the hive gets jumbled, removing frames becomes difficult and potentially lethal for the bees.) 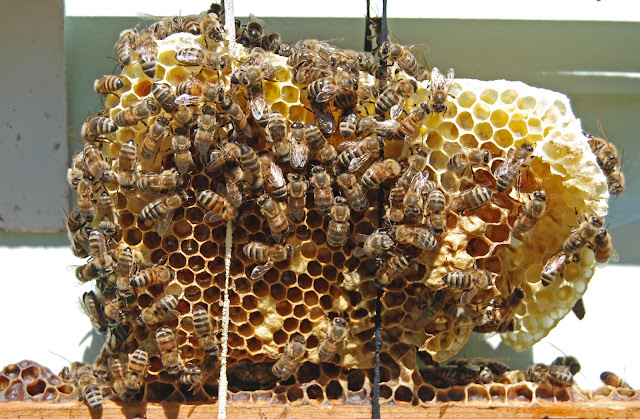 I salvaged what I could in rubber-band cradles, interspersed some of the most chaotic comb with full sheets of embossed wax foundation, and hoped for the best.  Ideally this would encourage the bees to straighten things out.

A week later, I took another look. The bees were still tending the comb that I'd rubber-banded in place.  That was good. 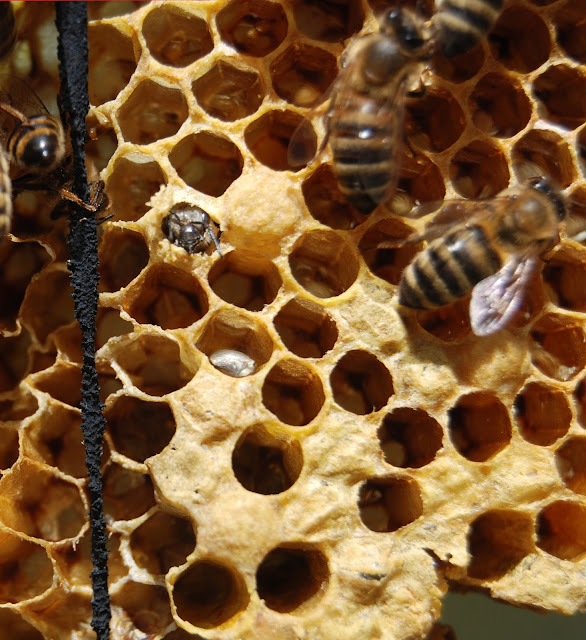 Last weekend, most of this damaged comb contained larvae.  I was pretty sure I'd perpetrated a massacre, and that none of these developing bees would survive.

Instead, I was pleased to see healthy bees, emerging from these cells.  Do you see that little face, in the upper left quadrant of the photo?  That's a bee, emerging for the first time. 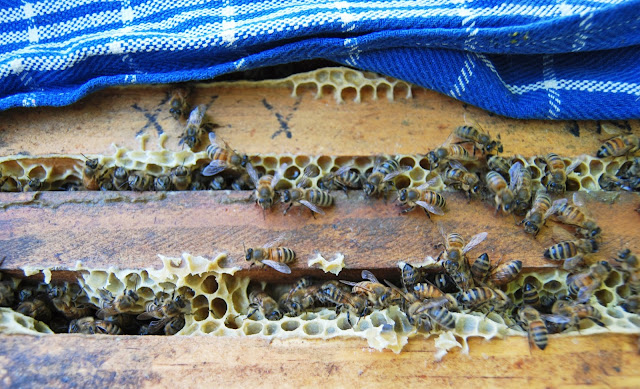 The situation was still pretty dire.  In a misguided attempt to avoid crushing bees, I'd given them a bit more space.  Space that they promptly filled at all sorts of irregular angles.  This means that unless I make big changes, I'm going to continue damaging comb each time I inspect the hive. 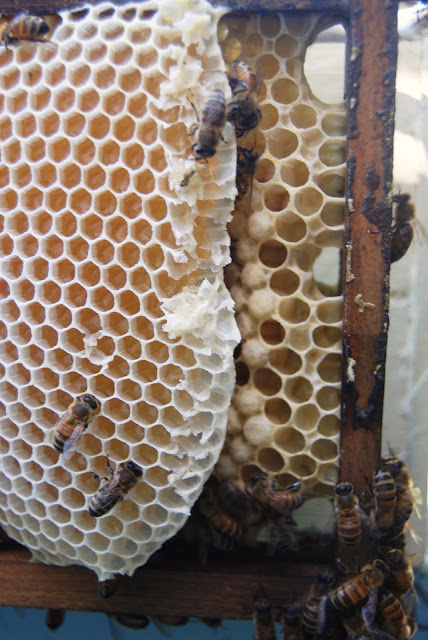 For instance, on this single frame, I've got a double layer of comb.  The area on the right contains developing larvae, which I don't want to damage.

My plan is to intersperse these irregular combs with full-frame sheets of embossed wax, which will hopefully impose a bit of order in the hive.  Typically, I let the bees build their own comb, but this has gotten out-of-hand.  When I remove a frame from the hive, I don't want to injure bees or damage the hive in the process.  Unless I can instill a bit more regularity, I'm going to keep hurting the hive.

And nobody wants that. 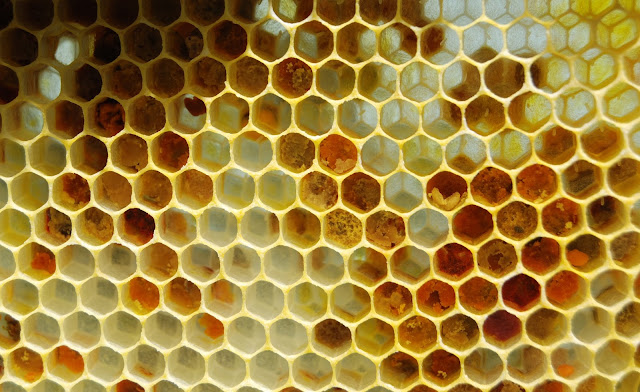 Grrly Girl said…
Ah, welcome back Lisa.
I've missed your posts.
I was telling a friend about your knitting, gardening, designing etc.
We wondered how you got it all done.
Looking forward to seeing your next (current knitting project)

Unknown said…
I love seeing the bee threads on LSG. So very interesting! Love the pic of the emerging bee. Thanks for putting this out.
7:45 AM

Lori McNamara said…
Love your bee adventures, read about them in Ravelry, I hope the hive thrives!
1:01 PM 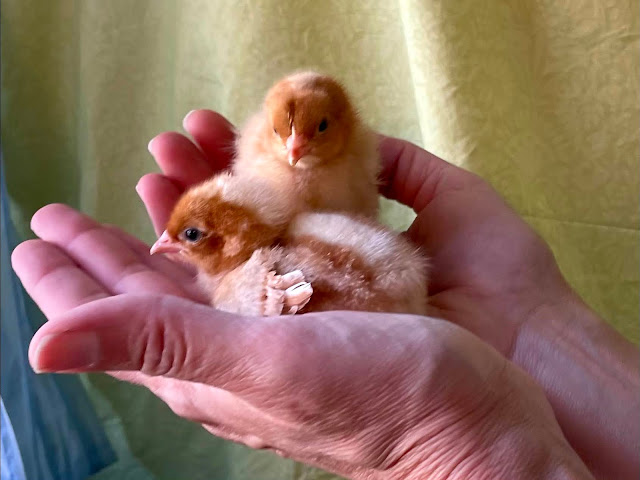 ... Oh hello blog!  I've neglected you terribly. But there's nothing like a fresh start.  In fact, the only thing better than a fresh start is a fresh start with fluffy baby chicks. On Friday, I picked up the two baby chicks that Robb had ordered from BioFuel Oasis in Berkeley.  They were hatched at Belt Hatchery in Fresno on Wednesday.  Is anything cuter than three-day-old chicks?   Robb and I ordered sex linked chicks, which are a hybrid two differently colored breeds of chickens. Because roosters carry two genes for coloration, while hens only carry one, this crossing produces chicks who have markedly different colors depending on their gender.   Hopefully, this will mean that we didn't bring home any accidental roosters. I picked the sassiest pair of chicks in the store, because I hoped that they'd be the healthiest and smartest.   Chickens are not known for their intelligence, but we've got one particularly dim-witted hen in our adult flock.  Our most foolis
Read more