How Not To Keep Bees 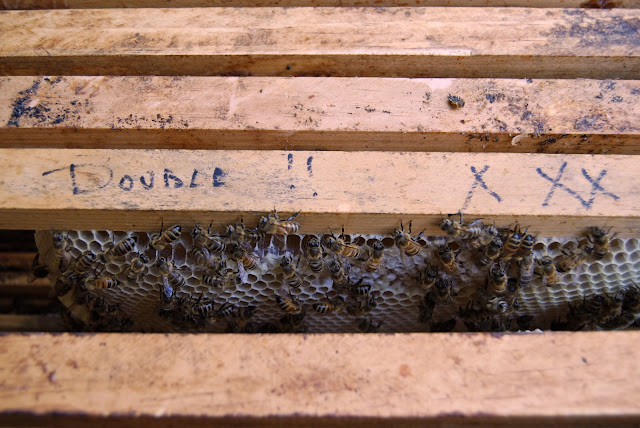 One thing I've learned about keeping bees, is that a good beekeeper has to be prepared for any situation.

And that's one of those things that's Easier Said Than Done.

When I decided that I wanted to keep bees again (after a year-long break, where my schedule was just too hectic for bees), I put the word out among my friend, and almost instantly found myself in possession of a swarm of bees.  I thought I was ready for them, but I really wasn't.

One of the tricky things about bringing home swarms, is that you're transporting the bees after sundown, and so you're installing them in your hive in the dark.  It's a bit late, perhaps you're tired or hungry, and under those circumstances it's easy to make mistakes. 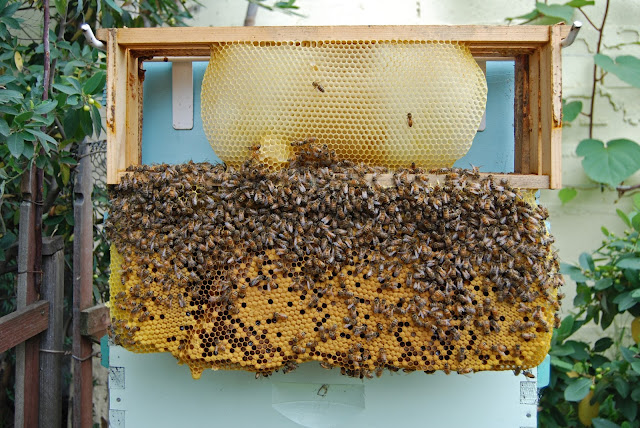 When I was installing the bees in their new home, I somehow failed to put the correct number of frames inside my beehive.  I left open spaces.  I don't really remember why I did this. Perhaps the swarm was sitting on a branch, and I thought I shouldn't overcrowd the bees.  Perhaps I was just being stupid.  Perhaps I was tired and distracted.  Who knows?

What I do know is that bees don't like gaps in their homes.  They build their combs with remarkable order.

With great speed, my bees filled the empty space with beautiful comb.  And then the queen filled every cell in that comb with eggs.  When I inspected the colony, I realized my error.  And I was unwilling to risk damaging the developing bees. So I wrote a warning on the top of the frame, and left things the way they were.

Can you see what I'm talking about?  In the photo of the comb, you see that the upper comb is surrounded by a wooden frame, while the lower part of the comb is not. The bees have built comb that slots between two of the hive boxes.  In some ways, it's really neat. In other ways, it's a bit of a mess.

Can you also see the small cylindrical structure hanging down on the bottom of the comb, about a third of the way in from the left edge?  That seems to be a cell made for the purpose of breeding a new queen.  This was odd, because clearly the colony's existing queen was healthy, and laying eggs like crazy.

I decided to wait, to see if my next inspection might happen at a time when this particular comb wasn't full of larval bees.  That upper photo was taken on June 17th. 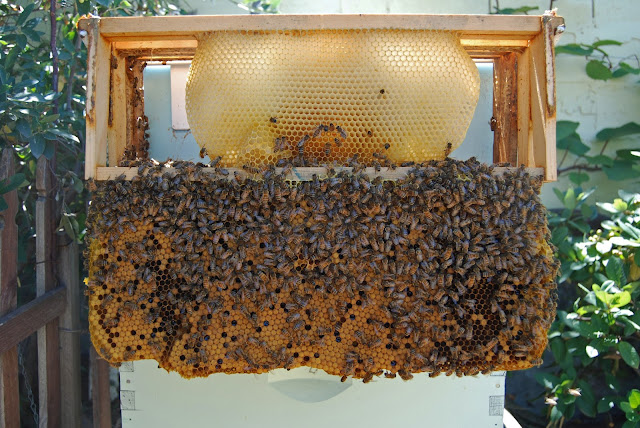 It's now July 10th, and the bees that were pupating in the cells have hatched out.  However, the queen has refilled the cells with new eggs, and the workers have closed those cells up again.  Another generation of bees are developing.

I had an idea about cutting the comb away from the wooden frame. I had made a sort of cradle to hold this comb, so that it could be re-inserted into the hive.

But the developing bees are just too precious to mess with.  So, I'm going to leave things alone again.

Oddly, the queen cup that was present a month ago seems to be gone now.  Did I crush it when I moved the comb last month?  Did the bees decide they didn't need it, and tear it apart?  Did I queen hatch out of it?  Who knows?

I am not going to win any awards for beekeeping, but at least I don't feel like I've done anything terribly harmful to the bees.


A Year Ago
Does This Cat Make My Knitting Look Big?

Two Years Ago
The Caterpillar Plantation

Five Years Ago
A Very Similar Beekeeping Situation, Though Not In My Hives

Six Years Ago
Visiting an Experimental and Historic Farm

Eight Years Ago
Nice Tail (Click this one for the photo)

Nice Years Ago
I Need Someone To Talk To
bees