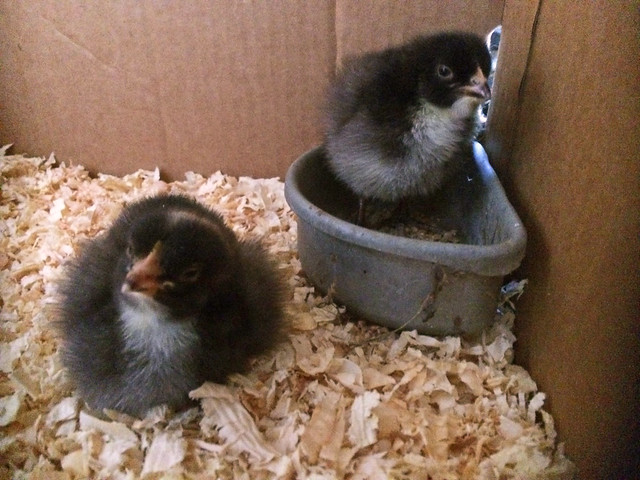 Robb and I bought two baby chicks today in the hopes that our broody hen Harriet could be fooled into thinking that they were her own flesh-and-blood.  (That's what we were doing when we found the sweet ill-fated kitten.)

We realize that we're probably adding a whole lot more chaos into our lives by increasing the size of our flock. But we've never shied away from a little chaos, and anyway, it might be the best way to add some younger hens into the mix.  If the babies can be passed off as "family" hopefully there won't be a lot of conflict in the flock.

Fingers crossed.  We're hoping for the best, and preparing for bloodshed.

We had an elaborate plan about relocating Harriet into a private nestbox while she slept, waiting a while for her to settle down, and then slipping the two babies under her wings.  This is apparently a pretty traditional way of doing things.  Chickens aren't very smart, and have a strong biological drive to raise babies.

Harriet of course, was having none of this.

Robb fenced off part of the run under our henhouse, and when all the hens were asleep, I moved Harriet downstairs into her new nest. Much fussing ensued, but she eventually settled down.  I figured I'd wait about half an hour, and then slip the babies under her wings.

But in the mean time, Harriet somehow escaped through the fence that Robb had erected and had stalked back up the ladder into the henhouse-proper and had put herself back to bed in her own nestbox.  Back upstairs with all the other big hens, who might cause trouble for the babies. Great.  Who knew that Harriet was capable of tunneling under Robb's fencing? 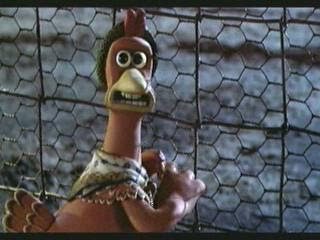 Oh well, the babies needed to sleep under a mother hen in order to stay warm.  Harriet needed to bond with the babies.  And I -- having been sick for the past few days -- needed to get to bed and quite mucking around with chicken sleeping arrangements.

So we unceremoniously stuffed the babies under Harriet, wrote a quick blog post, and when we last checked the chicks were yeep-yeep-yeeping underneath a dazed-looking Harriet.

Let's hope that everything goes smoothly in the morning, when the entire flock wakes up.

Cricket-bug Corner said…
Keep us posted - i'm excited to hear how she reacts!
5:46 AM

Michelle said…
Good luck with your new babies. Maybe Harriet will turn out to be a good protective mom. I hope so. And thank you for taking on that heart wrenching kitten, it would have been lovely if the outcome had been better, but in the end it was what was best.
6:59 AM

jess said…
We did this this spring with one of our Wyandottes who was broody. It worked out great -- though we left her in the main coop in the nesting box she was already brooding in.

We did have a strange (to me) thing happen where the broody we tucked the chicks under only brooded them for 4 weeks, and then one of the other hens (who had also been broody a few weeks previous but had started laying again) took over the mothering. They both did a good job and now the pullets are 16 weeks old. Good luck!
10:42 AM

Anonymous said…
On Friday I brought home two new chicks as well! I was at the feed store getting antibiotic for two sick chicks and could resist two more! I spent all day Sunday building our coop, which still isn't done but should be by next weekend... maybe. You inspired me to get chicks in the first place!
6:58 PM