A Good, Hard Look at Bees and Garden 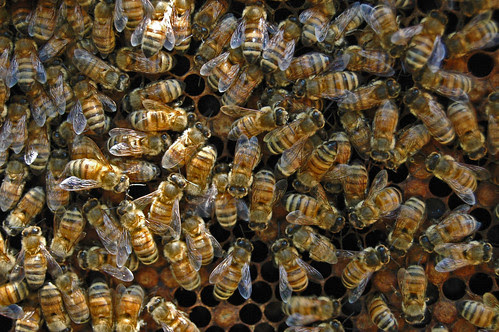 Yesterday, I opened up two of our three beehives.  The Mera colony (pictured above) seemed to be lagging, and I was curious about what was going on.  These were bees I had at a neighbor's house last year, but took back because it turned out that she was, in fact, terrified of bees.  (I'm not sure what that was all about, and it isn't really worth speculating.)

These bees are remarkably small and wonderfully docile.  They were easy to inspect, totally ignoring my activities.

I saw a fair amount of capped brood, and just a little bit of larvae, but no evidence of eggs at all.  I suspect that these bees had lost their queen, or that a new queen had not yet started to lay. 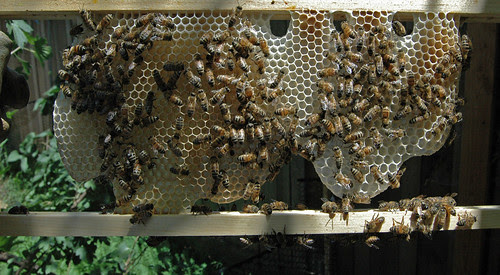 I went into the Camelia colony, looking for a frame of eggs that I could "transplant" into the Mera colony.  Bees will accept "donor" eggs, and can raise a new queen from another colony's eggs. 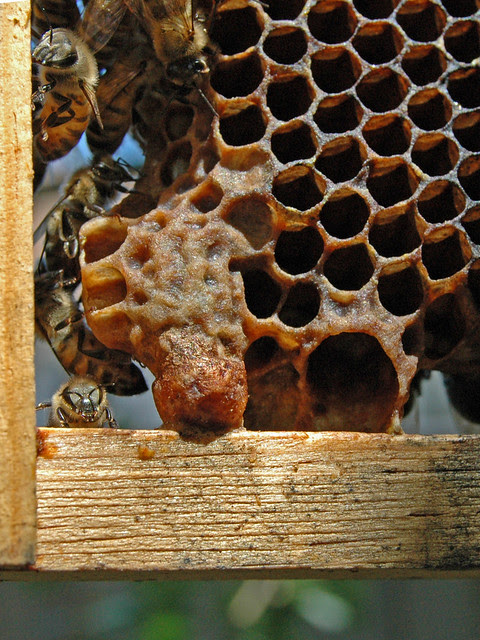 The Camelia colony has been doing well, since the day I picked it up. These bees are also very gentle, and never stop flying.  I saw loads of capped worker brood in this hive, which bodes well.

I also spotted a few capped queen cups, which was puzzling.  Are these bees fixing to swarm?  Are they worried about the health of their queen?  What's going on. 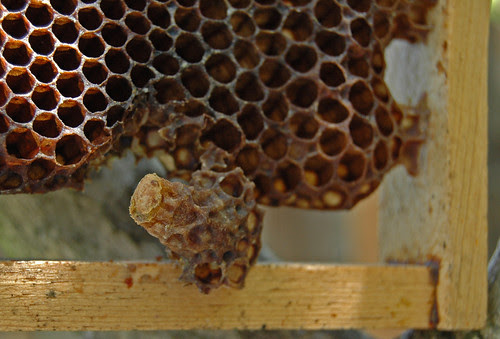 Queen cups are distinctive in shape and size, often jutting out from the surrounding honeycomb.  While my goal in hive-inspection is gentleness, I can be a bit of an oaf. I managed to jostle this queen cup when I was moving frames of honeycomb around.

Beehives are a lot like file cabinets, with hanging file-folders. When you want to remove a frame of honeycomb, you have to be mindful of the frames around it.  Work too clumsily, and you'll massacre innocent bees.

And did I ever.

My plan was to find a frame of newly laid eggs in the Camelia colony, to give to the Mera bees.  The Mera girls would then use those eggs to raise a new queen.  But they would not accept Camelia bees in their hive, so I needed to evict all the Camelia bees from the frame before I stuck it into the Mera hive.  Bees will release their hold if shaken, so I rapped the frame on top of the Camelia hive, hoping to knock the bees off.  Only, I clearly used way too much force, and knocked a shocking amount of developing larvae loose.  A bee massacre, indeed.

Hopefully, the Mera bees will be able to salvage enough eggs to raise a new queen, and thrive in spite of my terrible handling.

I should also mention that I had hoped to harvest some honey to bring to a friend's garden party, but the bees had none to share.  They had unripened uncapped nectar, but none of what we call actual honey. 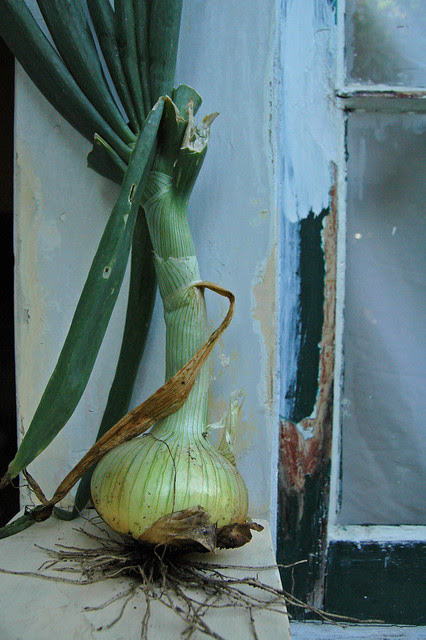 When I wasn't murdering larval bees, I was attacking the vegetable garden.  It was time to clear out the cool weather plants, and make room for summery plants.  I followed the advice of blog readers, and ruthlessly removed all of our leaf-miner infested chard and beets.  About half of that crop was salvageable, and we'll eat it some time this week.

I also tore out the fava beans, which were just about done.  I'm not sure I'm going to grow them again next winter.  They are gigantic space-hogs, and are hugely labor intensive to cook.  Any suggestion on what I should grow in my Oakland garden, instead of favas?  I've had poor luck with broccoli and Asian greens -- they get devoured by snails, and bolt almost immediately. I need to learn more about the mechanics of bolting.  Why do plants do this, anyway?

In my clean-up I found the poor French tarragon that had been swamped by the favas, as well as what I think is a volunteer pomegranate. I'll let that stay where it is, and move it during the rainy season.

I harvested this one gigantic onion (unknown variety) as well as some more strawberries, and planted our rather woeful-looking basil plants. I also started some bush beans and snow peas, which are probably laughably late.  I finally got the scarlet runner beans into the ground, and staked up the ones that returned from last year.  We'll see how all that goes. 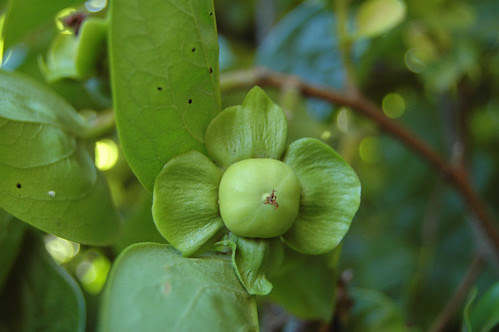 Our tiny backyard orchard looks promising.  The persimmons are starting to develop. They'll ripen in November, which seems so very far away. 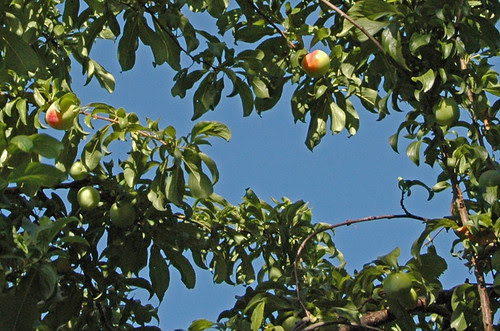 In the highest branches of our plum tree, some of the larger fruit is beginning to change color.  I could not be more delighted.  This tree looked terrible, when we moved in.  And now it is just covered in fruit.  I'd already imaging sharing fruit with friends, and making jam and plum wine. 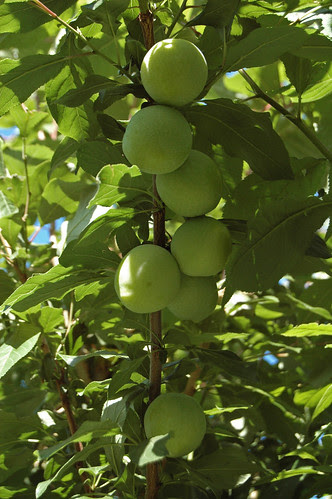 Our pluot is also thriving.  I bought this tree in February of 2010, and I think this will be our first "real" crop.  If I remember correctly, we got about half-a-dozen fruits from it last year. 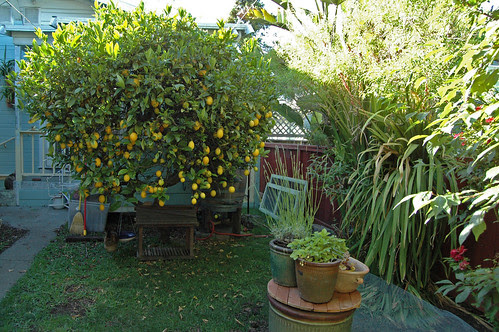 We had a cold (for us) winter, and our lemon tree really struggled.  All of the fruits, regardless of size, turned from green to yellow all at once.  Many of the leaves were damaged by the cold. But now, the tree looks to have regained its health, and is putting out new growth.  To the right of the lemon, along the fenceline, is our insane lemon verbena bush. That thing is over ten feet tall.

In the foreground of the photo is one of the wire cages that Robb has built, to keep our voracious hens from devouring our newly-planted grass. 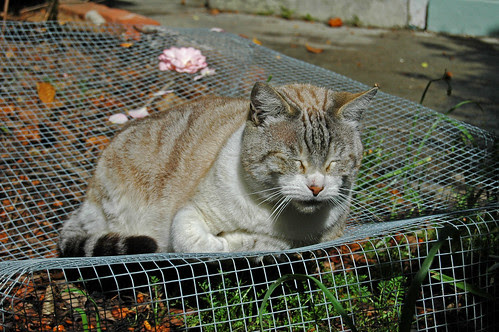 The cats approve of our efforts, although there seems to be some confusion about the term "garden beds."

This posting is part of the weekly garden round-up, hosted over at Daphne's blog.  If you're curious what gardeners around the planet are up to, mosey on over for a look.
bees cats food garden orchard

Jimmy said…
I've found that you can't do a hive inspection with killing at least a few bees. I figure that I don't kill any more than what might get caught while flying. I do hate when I rip open larva cells thought but when my bees have cells built between frames it can't be helped.
11:21 AM

gardenvariety-hoosier said…
Hope the one bee colony gets things sorted out. As to what triggers a plant to bolt it's different for each plant family. For spinach it's too much hot weather. I've found that when Asian brassicas bolt it doesn't necessarily ruin the flavor, at least in the initial stages.
2:03 PM

Anonymous said…
All the fruits look so perfect! What is your secret? I tried spraying with Surround last year, but it didn't work. Plums, apples, and peaches are still plagued by curculios.
2:13 PM

. . . Lisa and Robb . . . said…
My secret is Doing Almost Nothing. I compost a lot, and occasionally spray with soapy water. Really, I think I'm just really lucky.
2:20 PM

Michelle said…
I don't remember if you said that you don't like eating favas whole, because that's one option, just grow a few plants and then harvest the beans to grill or roast and eat whole. How about garlic? If you've never had green garlic you are in for a treat. Jeeze, I can't think of many veggies that won't bolt or get eaten by snails that you can grow through the winter or in early spring. Am I ever lucky that slugs and snails are not a problem in my garden.
3:06 PM

Norma Chang said…
Your could grow kale or collard greens. Love all your fruits, my mouth is watering thinking about enjoying tree-ripened fruits, what a treat.
4:42 PM 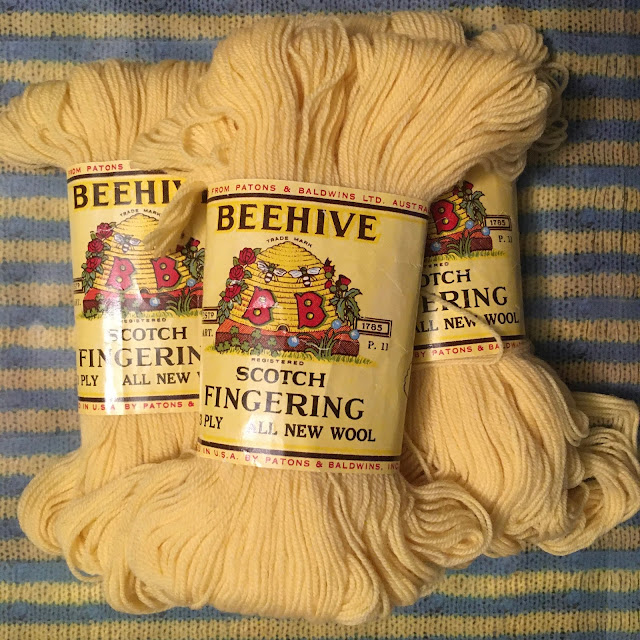