We can't save them all, but we have to keep trying

Let's start with a bit of Cute, since this blog doesn't contain very good news. Here's a gosling that was under care when Robb and I first volunteered at the International Bird Rescue Research Center in 2003. Since it had no companions and no parents, the rehab staff gave it a mirror and a feather duster for company. This little fellow stood a very good chance of survival. 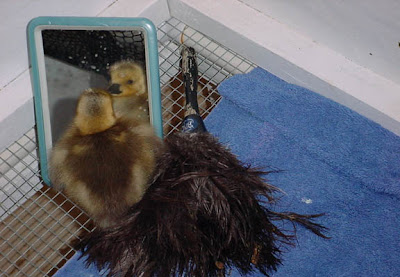 Sadly, the scaup that I picked up off the street the other day did not make it. Because her eye was bashed in, she was unreleasable, and had to be euthanized. Because of their anatomical structure, ducks like this scaup are not able to take flight from dry land. Had I not picked her up, she would likely have been hit by a car or been mauled by a dog. I know I did the right thing, even if I hastened her death. (Are tears welling up in my eyes as I write this? Of course they are. QUICK!!! LOOK AT THE GOSLING!)

California has been battered by severe storms recently, and many birds have been affected. The International Bird Rescue Research Center has over a hundred birds in care, and because half their animal care staff are responding to an Argentinian oil spill (radio report, here), they are terribly short-staffed. I'm feeling really ill this weekend, which is the only reason I'm not up in Cordelia, trying to help the birds.

Bird nerds will be amazed to read that a juvenile Magnificent Frigatebird is currently in care up at IBRRC. The Frigatebird, which has a wing-span of over seven feet, got tangled up in a pine tree in Healdsburg. It took a local window washer with a forty-foot ladder to retrieve this rare bird. Frigatebirds are also known as Man-O-War birds, because of their aerial piracy. They chase other birds and force them to regurgitate their food, which they swallow in flight. (Can't wait for the comments about that bit of klepto-parasitism...)

This particular bird is the only of its species to have ever been admitted to the International Bird Rescue Research Center.

I am hopeful that this truly magnificent animal and most of the others under care will soon return to their lives in the wild.
birds

Anonymous said…
Hm, maybe that mirror-and-a-feather-duster trick will work for me sometime, too... Neato-o.

Anonymous said…
Lisa, one of my only experiences rescuing birds was when I came home to find Michi had cornered a red-tailed hawk in the driveway. It was on it's back with talons up. We separated the two, and it still didn't leave the ground it was sort of moving. We called the Grafton Wild Animal Hospital and they told us to bring it in, by covering it with a box. When the vet analyzed him, she said he was very light, probably not eating. She determined that he had injured his talons and there is no blood supply to the talons to heal them. Since he couldn't feed himself, he also had to be euthanized. He was so proud and beautiful looking, it still makes me sad!

The other birds we rescued were the silly Kingbirds, who nest in our garage in really flimsy looking nest. They have huge "litters" and some of them always seem to fall out. We put them in a box, up high, and the parents, after berating us, came and took care of them.
We closed in the garage, and they don't come anymore. I miss them!!
7:24 PM

You saved that hawk from death by starvation, if that is any consolation.
8:07 PM

Cellissimo said…
You do good work. I'm so sorry about the bird.

I'm also glad to hear you made it across the bridge at SFMoMA. I loved the Joseph Cornell and the Olaisson exhibits!
8:53 PM

Anonymous said…
Hey Lisa, sorry about your duck. What do they do with the remains when they become deceased? I am big on collecting skeletons,and ducks have very interesting skulls.

The mirror and feather duster are good ideas to help the baby bird you featured in the photo, I'll have to remember to do that next time we find one of them. It happens, ocassionally.

I think we are going to put up bat boxes here this spring. 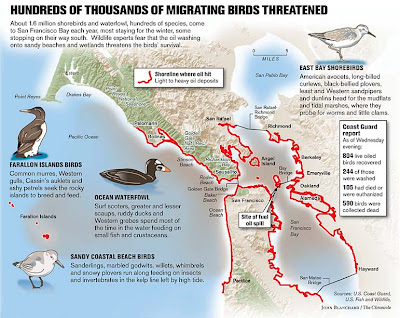