March 21, 2007
Lisa and I were looking at our recent trip to Washington and Oregon as a kind of a test. Neither of us had traveled farther than San Jose (about an hour away) since my injury. It had been over a year since we had slept in a bed other than our own and this a record for both of us. I think we were itching for a change of scenery.

As I said it was a test but not the pass/fail kind. It was more of a learning opportunity. And, oh, boy, did we learn a lot! For instance, we learned that we chose the absolutely right bed for our bedroom. Hotel room beds taught us that. We learned about the special attention you receive when you go to the airport with an expired driver's license. (Thank you, TSA!) We learned that traveling will be very, very difficult for me until I can get through a day without needing to lie down. Most surprising, we learned just how fragile I can still be.

Still, the trip was a great success in other ways. We had a fun time at the Spring Flinger event and hanging out with our friends Sarah, Angela, Elisabeth, among many others. And we had a blast at the Olympic Club Hotel.

Why We Love the Olympic Club Hotel

It seems like every hotel in America has a similar design and objective: make each guest feel like they are the owner and first-ever user of the room. Everything must look perfect, new and unused. In a historic place like the Olympic Club Hotel the opposite philosophy is in play. The design seems to be saying, "Not only have others been here before you but this is what they looked like and here are some of their stories..."

As it stands today, the Olympic is a historic building in Centralia, Washington which houses a microbrewery, a tavern, a pool hall, a restaurant, a hotel, and a cinema.

All the walls in the rooms and corridors of the hotel are covered with beautifully painted portraits of former employees, gamblers, drinkers and guests and their written reminiscences. This was in our room... 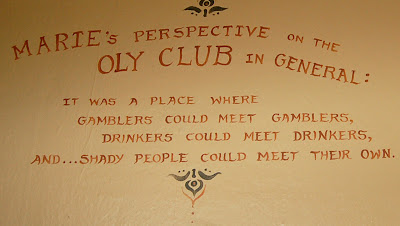 Lisa and I were saying that we'd love to go back someday, but there are several other inns in this small chain between Seattle and Portland, so maybe we'll try some of the others first...

By the way, the startlingly beautiful magpie image in the previous post is an example of Lisa's rubberstamp carving. Can that girl wield a knife, or what?!
friends hotels letterboxing Robb Speaks travel

Anonymous said…
Said it before...and I'll say it again...I was thrilled with meeting you two! How funny to walk out our room at the Olympic, and see, of all people, Robb going into his room! Very, very sereal. The weather shown its best face for you, the woods put on its new cloak of green, and the beer flowed.

BTW...did you end up with a new favorite from the tasting menu? The ruby got you by surprise, didnt it!
8:00 PM

Mark and Sue said…
This HAS to be a hotel owned by the McMenamin chsin. When we visited Funhog in OR, we stayed at Edgefield and it was filled with the wonderfu, whimsical designs like this.

Makes your stay that much more enjoyable, doesn't it?

Lock Wench said…
That looks even cooler than it was described. I will DEFINATELY have to check this place out when I travel to the Left Coast.

From what people tell me, meeting you two was like meeting a celebrity. They knew what you looked like already and knew so much about your lives. I can imagine that your stamps were the most coveted at the gather!

Thanks for sharing the pics with us!

Anonymous said…
Lisa IS good with a knife, I remember dreading meeting her in a dark studio in Baltimore... but thats a story for another day...

Glad to hear the trip went well and you guys look great! If Robb is exhausted, he doesn't look it in the photos. This is not ever the case with me.

If you ever want to go for another trip, preferably a road trip of a few days, I suggest the Virginian Hotel right outside of Casper, Wyoming. (It's still closer to you than to us). It's right next to the fossil fields that famous, intrepid and criminally-minded paleontologists from the dueling Smithsonian and Andrew Carnegie museums used to work in, and steal dinosaur fossils from each other and the railroad at gunpoint in the 1800's-1900's. Those pesky museum guys had real stones then. (Pun intended!)

The Hotel on the site is the one that "The Virginian" was written by Owen Wistler, (they still maintain his tiny suite of preserved rooms for people to look at) and each teeny tiny room for rent at the hotel is decorated in a different and peculiar style, comfort ranging from the 1800's to funky 1950's. They have the best cook in all of Wyoming there, and people drove hours just to get a meal. Course, thats true for all of Wyoming. Definately a good and worthwhile place to stay during your future rambles, and they have a Silver Dollar covered bar (literally) on the first floor, so it's really good for Robb to investigate Wyoming beer at.

The only walking around in nature would be restricted to strolling through the fossil fields, which you can do if you write ahead and get permission from, as the site (ranging over many miles) still has claims that are worked by different museums. And the weather is nothing short of hellish, it snowed in July when we were there (hence the many charms of the hotel). But you can't miss the fossil cabin, made from giant chunks of fossilized stone, and big fossil tusks. It's run by a german ex-patriot woman, and is currently for sale! Set your self up in business while on your trip there, eh?

Absolutely no greenery out there though, so it's a big change from your last trip!