Re-connecting with the community 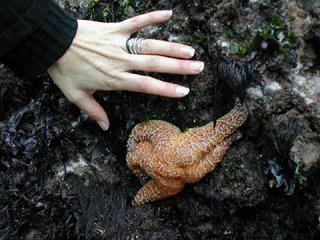 Today, Jenna, our Rehab Without Walls social worker came by. Among other things, she is helping me find community based support for Robb. Robb also spoke to Chona, who was one of Robb's therapists at CPMC about this.

We signed up for a "hike" with Bay Area Outreach and Recreation Program, and I had a long talk with Lori, the woman who organizes their outings. She's blind, has epilepsy, and uses a wheelchair and has been guiding white water rafting trips for the past twenty-three years. Hard not to be impressed with a woman like that. 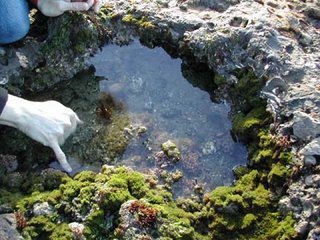 As far as our hike goes, I think it will be a fairly low-key event. We're going to Crab Cove in Alameda, which has wheelchair accessible tidepools. Robb and I love tidepooling, and when we were last at Crab Cove, we remarked at how cool it was that this park had found a way to make this activity available to people who use wheelchairs. Given Robb's tolerances for activity at this point, we'll just play this one by ear.

(We do know, by the way, not to touch any of the creatures in the tidepools. I often photograph my own hands for scale, because with pictures of squishy invertebrates or flowers or whatnot, it is sometimes hard to recall size. Parenthetically, I think that this may be Gina's hand in this particular photo.)

I ran out to get some materials for Sten and Rebecca's chuppah. They've asked friends to embellish a square of fabric for their wedding canopy. What a lovely idea. I've got to get cracking on this!

Ashley came over after work. It was so nice to spend time with her. I had been having a blah day (I think I'm battling a cold) and seeing her made me so happy.

And for no reason, other than my obsession with creatures and their tongues, I think we should wish Mister Yuck a happy thirty-fifth birthday.
friends nature recreation therapy wheelchair

Anonymous said…
We are SOOOO famous! We made it onto the How's Robb Blog! Woo Hoo!
6:00 PM