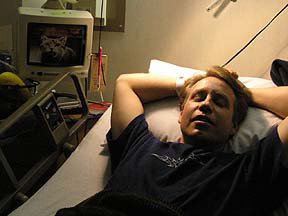 We're not big television watchers. In fact, I'm woefully ignorant of most of Pop Culture. So it was not a tragedy when Robb realized that the television in his room didn't really work. 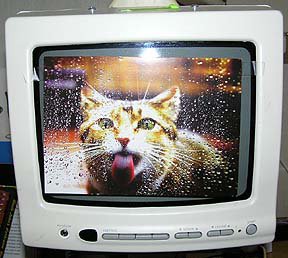 But that would never stop us from having a little fun.
And for those of you who've missed the Butter Pat Gallery, here's an example of the differences between Highland Hospital and California Pacific Medical Center. 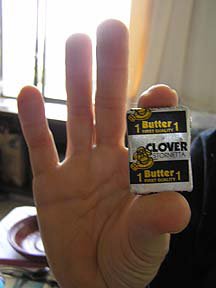 Anonymous said…
I've seen more cat's tongues the past few weeks on this blog than the last ten years put together!!!! hee hee! Does all that tongueage have to do with butter pats?
Abby
9:36 PM

Paul in SF said…
Just want you to know that YES, I check your blog from time to time. Robb's progress moves so fast that sometimes I get confused. Is he going home Tuesday? Thursday?

WHOOO HOOO!!! Big APPLAUSE AND CHEERS -- no matter what day he goes home, he's worked hard and showed us all how it's done when faced with catastrophe!