March 03, 2006
It seems that Robb really does have a release date. Unless anything changes (and I'm not ruling that out), Robb will be coming home on Tuesday.

In therapy today, Robb graduated from using the four-pronged cane, to a normal single-point cane. He says that the difference is astonishing, and that this is the first time that he has experienced normal arms-moving walking since the accident.

Robb also went out on another outing for occupational therapy. He was wheeled down the big hill by CPMC (they missed the MUNI in both directions, and the weather was threatening), and then walked around on Castro. He and his therapist had lunch at a taqueria, which made Robb very happy because he has been craving black beans. It had been bright and sunny when they were outside, but as soon as they ordered lunch, the sky let loose, and it poured throughout lunch. By the time they were ready to leave, it was clear and sunny again.

On Thursday afternoon, Robb got another room mate. I figure that all this change is a good thing, as it signals the successes of the program at CPMC. People get better, and are able to move into less intensive care, or to go home. The new room mate is a man in his eighties. Strangely, his son noticed the photos of the staff on one of the bulletin boards and realized that he is next-door-neighbors with one of the nurses on this unit.

Me and the Cats?

It seems that every time I let myself get over-tired, I catch that same cold. I'm home today, flat on my back, blowing my nose on vintage handkerchiefs, and snuggling up with the cats. They've missed us, and seem to want to catch up on the past lonely month in a frenzy of cuddling and purring.

At Annalisa's suggestion, I gave the cats collars with extra-jingly bells, so that they can't sneak up on Robb, and trip him. They were pretty miserable at first, but now they're running around, making a jingly racket.

When Robb came home for the home evaluation visit on Thursday, Mister Firdusi showed his displeasure at being abandoned by Robb by parking himself directly in the path of Robb (and Robb's walker) and giving Robb truly dirty looks. He wouldn't move, and Robb had to shove him out of the way with the walker. The girls have a happier approach to dealing with how much they've missed us. They jumped up on everyone, and rolled around and purred.

I never uploaded any pictures from Erica's visit. We did play tourist a little bit. 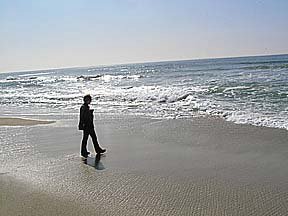 Here we are at Fitzgerald Marine Reserve. I've never seen such a low tide at this beach. It was a great day for "tide-pooling," and the harbor seals were sprawled on the rocks. They should start having their pups, soon. 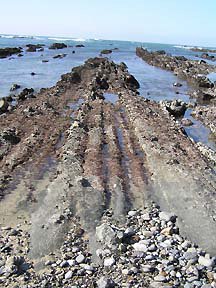 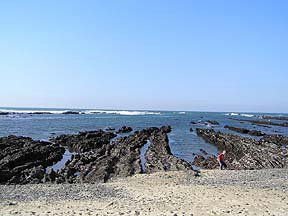 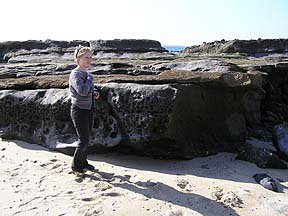 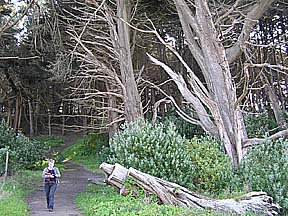