Of Cats and Chickens 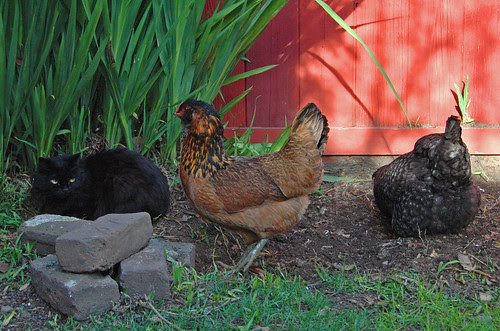 Our kitty Linguine is a Very Dignified Cat.  She may have grown up on a dairy farm, but that doesn't mean she has a lot of patience for chickens.  I had to laugh when I saw her giving the Death Glare to dopey little Lydia.

I tried filling in the holes our chickens have dug all over our garden, but what I actually did was top off their holes with Particularly Interesting New Dirt.  They swarmed all over the New Dirt.  Dug into it with a frenzied intensity.  And at the end of the day, the holes were four times larger than they had been before I filled them in.  Oh, chickens.... When the hens weren't tearing up the garden, or hiding from the red tailed hawk who was screaming over our yard this weekend, they were sunbathing.  It's really quite endearing to see a hen spread her wings in a sunbeam and bliss out. 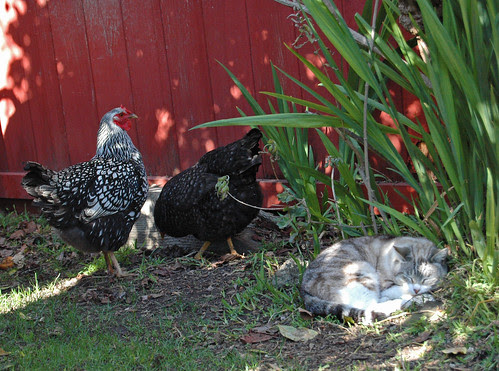 Generally, the cats and chickens work hard at ignoring each other.  No pesky hen will stand in the way of an Important Nap.  No sir. I think that Harriet is about to resume laying eggs.  All of the girls' combs are colored up again, after a winter of dull pink coloration.  Anne Elliot laid eggs in January, but decided to stop again in February.  Robb and I have been wondering if she's molting again, because the yard is filled with more fluffy down feathers than usual.

Say what you will about the chickens.  They keep us guessing.
cats chickens

zippiknits...sometimes said…
Keep an eye out for hidden nests. Though you have no rooster, the girls might try anyway. They pull fluffy breast feathers to line "bush" nests. I love chickens, so funny.
11:26 AM

Grow a Good Life said…
Great photos! I love how the chickens and cats just sort of tolerate each other and can hang out like that.
2:52 PM

Dianna said…
Great pictures of Linguine, Smog and the chickens, Lisa! How are Sleeves and Cardigan doing these days?
8:30 PM

Anonymous said…
Love the chicken stories. Have you seen this?
http://www.thirdroar.com/journal/2014/2/24/public-poultry-shaming.html
6:31 PM

normanack said…
I love the bit about filling in their holes. :-)