Today was a beautiful day, and Robb and I were out in our back garden, looking around. We realized that one of our beehives was swarming with ants.  That, sadly, was a sure sign that this hive was dead.  If bees are present in a hive, they'll fight off ants.  But once the bees are gone, ants swarm in to devour all the bounty of the hive.

This has not been a good season for me as a beekeeper. I've been dragging around for months with a low-level sinus infection, neglecting my duties.  This past week, the infection came to a head, culminating in a really unpleasant illness.  I was really miserable, feeling downright poisoned.  Thankfully, I was in touch with my doctor just as the sickness spiked, and I'm currently in the middle of a course of antibiotics.  Why I let things go for so long is a long story, and I need to be more aggressive about pursuing treatment of this seemingly chronic condition.

Taking advantage of the sunshine and feeling a wee bit better, I decided to open up the hive to see what was going on.

There wasn't a live bee in sight.  There were several dozen dead female bees on the floor of the landing-board, mostly with their tongues extended.  There was only the smallest evidence of dead brood. There were huge amounts of pollen stored up.  And none of the the cells containing honey had been broken open, either by ants of robbing bees from other colonies.  Unlike just about every other of our hives, there was no evidence of the bees building the specialized structures in which they might raise spare queens. 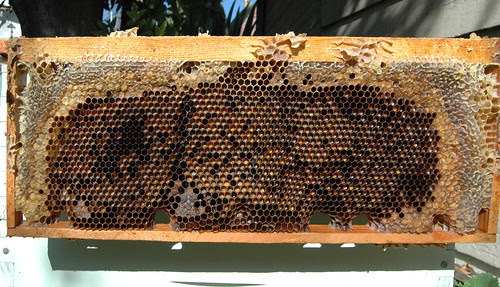 I'm probably missing the obvious signs, but I can't really say what happened to our bees.  Robb and I are both certain that the hive was flying vigorously as recently as last week.  Lots of winter flowers are blooming.  We haven't been seeing evidence of varroa mite infestations.  It's all a bit of a mystery. 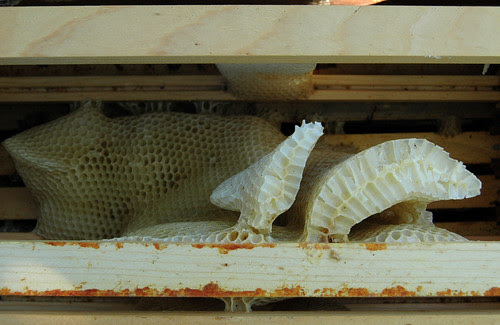 Trying to make the best of the situation, we harvested a bit of the honey, and gave the remainder (and all of the pollen) to our Magnolia hive.

The Magnolia hive is currently the smallest of our three backyard colonies.  The Mira and Victoria hives are doing amazingly well.  The Citron hive swarmed so many times this spring that it eventually had no bees left.  And our one un-named hive quietly died off this winter.  We missed the signs because we don't open our hives during the cold of winter, and what we thought was an actively flying hive, was actually other bees removing the honey from the unpopulated hive.

Some time back in the autumn, we had the Magnolia hive open when the bees got really agitated.  We slammed the hive closed, but apparently forgot to replace all of the frames.  Without the structure provided by the rectangular frames, the Magnolia bees built chaotic comb, which the queen then laid her eggs in.  We dared not disturb the developing brood, so we didn't touch this messy wax comb.  Today, we took a moment to examine the hive, and were pleased to see that the bees were not currently using this part of their comb.  Bees shift around inside the hive, using different areas at different times.

Robb and I leapt at the opportunity to do some much needed house-keeping.  We scraped out the empty comb, and inserted the frames that had been missing all winter.  Hopefully, the bees will make good use of what we've given them, and will make it through the rest of the winter.

Let's hope that the bees (and I) stay good and healthy.

(And if you're interested to read what other folks are doing in their gardens, moseyon over to Daphne's weekly garden round-up.  It's always a good time.)
bees

K said…
This sounds like the makings of a mystery thriller to me. Bees are such curious creatures. Growing up our neighbors raised them, and they would fly over to our alfalfa clover. I loved to lay watching them. They were so friendly, sometimes they'd crawl on my hand and let me look closely at them. I've been really concerned with the many problems bees have been having recently, and it is really heartening to read about your hives. You are helping save bees! Sanctuary! :) Perhaps they made some embarrassing insect faux pas and had to save face by moving to El Cerrito.
And I empathize with the sinus issues. Why is it so easy to suffer with such things? I don't want to be stuck on Rx for life, and most the time figure suffering through it is better than the alternative. Why is it so hard to do those nasal rinses? I don't know, but maybe some day I'll learn my lesson. For now, I suffer the consequences. You've inspired me to go drink some hot local honey tea. Cheers, Lisa and Robb. And cheers to the bees!
8:18 AM

Jimmy said…
One of my hives up and left. It was a small swarm that I knew wouldn't make it through the winter without being fed but even before fall they left so I'm back to one hive. Your situation is a mystery though. Be thankful you don't have to deal with wax moths.
9:58 AM

Norma Chang said…
Sorry to learn about your sinus infection. Wishing you a speedy recovery.
Hope you solve the mystery surrounding your beehive soon.
3:39 PM

Bee Girl said…
Bees just amaze me! I hope to always feel as though I'm learning something from them :-)

Sorry about your hive, though. Also sorry to hear you've been struggling with your health! Not sure where you stand on alternative medicine, but Applied Kinesiology has worked wonders for me! Let me know if you'd like more info.
4:45 PM

Andrea said…
Interesting to hear about your bees, I can see there like any other type of farming animal they require a bit of looking after and attention.(Mmm me who forgets to trim her ponies hoofs)I have great memories of helping my dad in the shed spinning the honey from the frames....Hope your hives build up and your soon enjoying the liquid gold!!
11:22 PM

Noreen said…
When I visit your blog, I always know I'll read something interesting, that is well written, and often learn something. Thanks!
5:39 PM