So, what about those eggs? 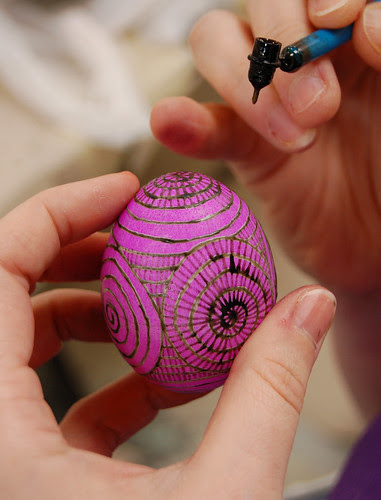 Better late than never, here are the photos from this year's Egg Stravaganza.

Once again, we had a mix of experts, folks who had done this once or twice before, and total newbies. This year, I think I *finally* figured out how to explain the basic concept of wax resist dyeing in a way that everyone "got" it.

For those who don't know anything about Eastern European Easter Egg dyeing, or batik in general, I've got a tutorial over at Craftster. In the most simplistic terms, you apply molten wax on the surface on the egg, which encapsulates the color under the wax. So, if you're drawing with wax on a white egg, and then you drop the egg in black dye, you'll end up with a black egg, with white lines on it. 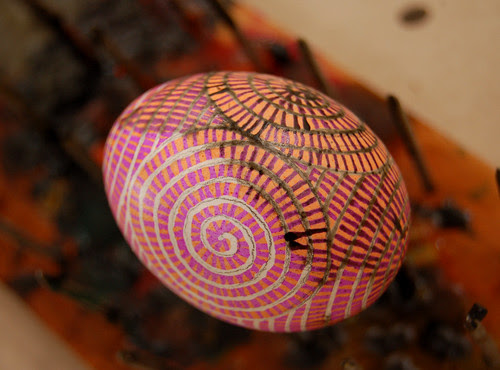 This egg was made by Jen, who has probably done more eggs than anyone I know. In this photography, the egg is resting on a "bed of nails" and the dark-colored wax is being melted away, revealing various layers of dye. When Jen rubs the wet wax, it will erase her pencil marks. It's quite a magic trick.

You can read her online tutorial, here. 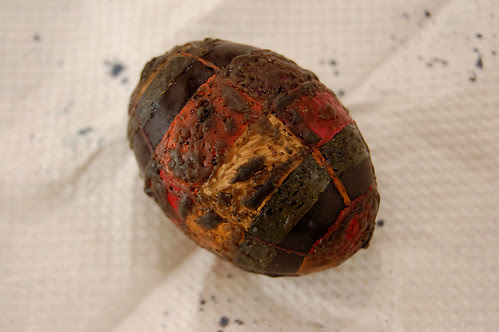 Less elaborate, but no less impressive was this egg, made by Mister Curbstone Valley. He filled in large areas of his egg with wax, which produced a very pleasing graphic egg. 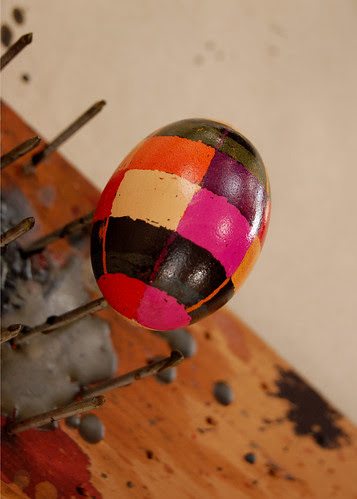 I thought this egg looked like something you might see at the gift shop of the Metropolitan Museum of Art. You can read what they wrote about Egg Day, here. 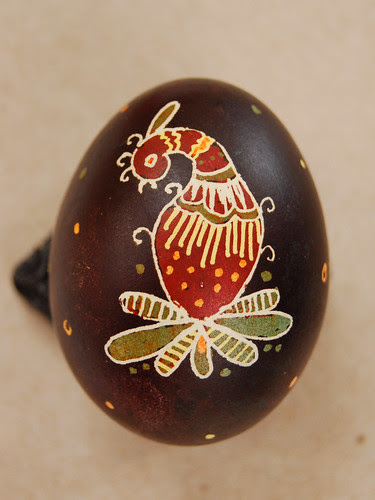 One of the things that was so fun about this event was seeing how everyone interpreted the technique. I really stressed exploration, and just sort of messing around with the materials. I think that when beginners see examples made by experts, it can be very intimidating, so I just kept saying, "Fool around. Have fun. Don't bother trying to make a masterpiece."

Not surprisingly, Alex went straight from experimentation to masterpiece. 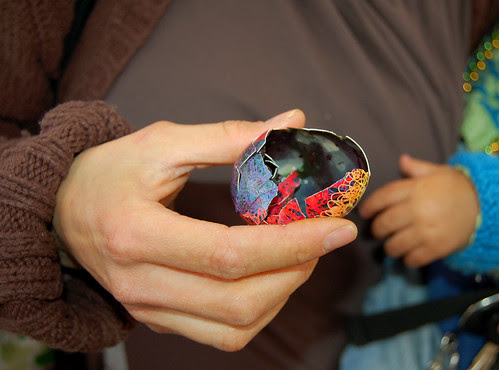 Every year, we have a few causalities. Henry was a bit rough on the eggs. And a few eggs exploded, when the was was being melted off. If dye gets inside of the egg, it can expand when heated, which can cause the egg to burst.

Next year I have to give better advice on avoiding explosions. 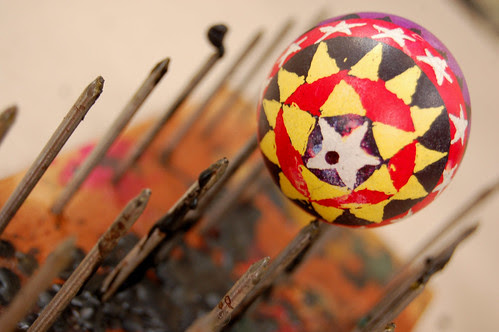 I was really pleased that Jen brought this evil looking rack for melting wax off of eggs. Without this, we'd be super-heating our fingers, which is never fun. 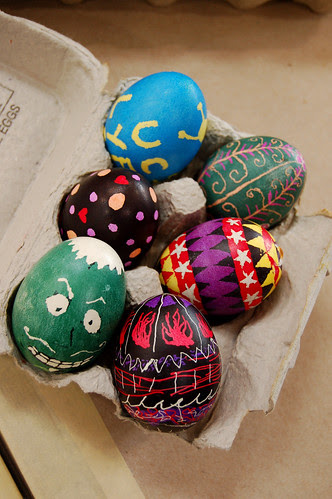 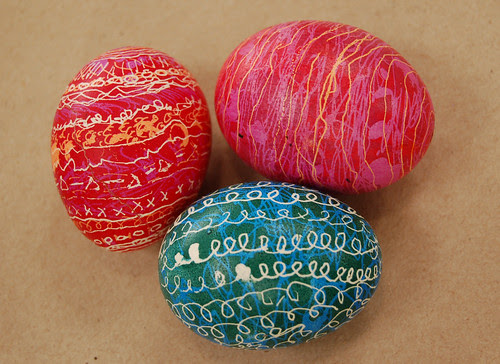 And what about these? I think they have wonderful depth, and show a fantastic mastery of the wax stylus tool. I always encourage everyone to make a scribbling doodle egg as their first effort. 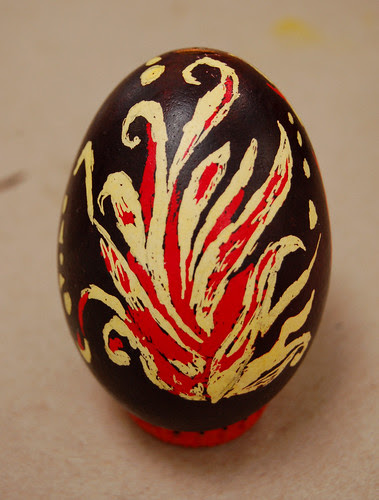 Sheri, who is working for me on her spring break, made a flaming egg. She'd done this before. 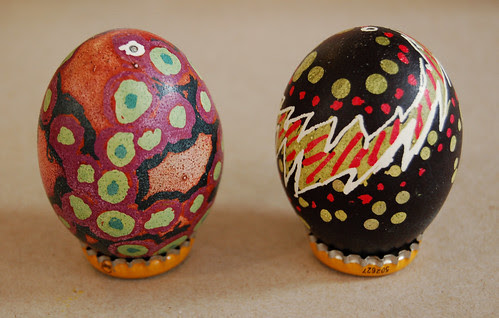 The other really special part about this particular party was getting to meet several of the people Robb refers to as my Imaginary Friends. These are our as-yet-unmet online friends. Clare and John of Curbstone Valley Farm drove up from Santa Cruz, and Becky of Hambox was in town as well. There's something so sweet about getting to finally spend time with the people with whom we've connected online! 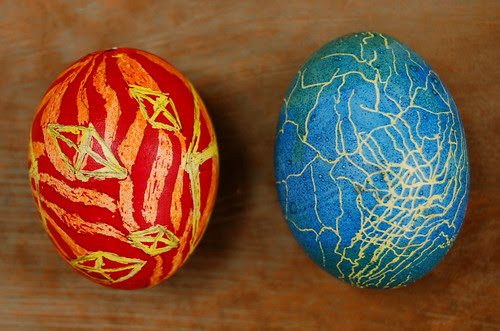 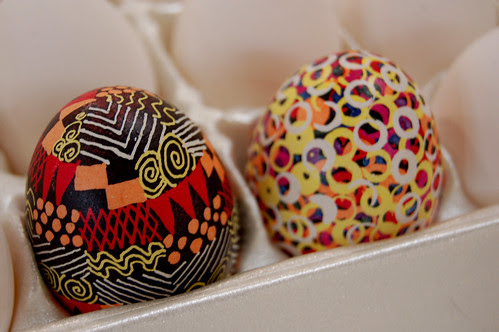 And for all of you who say, "I could never do that," I'm telling you that you're not giving yourself enough credit. Give it a try, and don't fall into the trap of thinking that you're not skilled or creative enough. I can teach anyone how to do this.

I hope to see even more of you at Egg Day, next year!

Annalisa pointed out that I didn't tell people where they could buy their own supplies. In the Bay Area, you can buy from the Caning Shop, off of Gilman. And otherwise, the go-to place is the Ukrainian Gift Shop.
art food friends

wassamatta_u said…
Wow, so many GORGEOUS eggs! I really wish Katie and I could have come this year, but schedules (and, as it turned out, the flu) kept it from happening. Maybe next year *sigh*....
1:04 PM

Noreen said…
Wow...these came out really great. Even the less "pulled together" ones still look very festive. The bed of nails is quite inspired.
2:10 PM

KALove said…
Too bad we missed it this year1 But thanks so much for hosting these parties. It was at your party 2 years ago that I first learned how to do this and immediately went home and ordered the supplies. Now I lead egg decorating days at Maya's homeschool in the weeks leading up to Easter.
3:13 PM

Anonymous said…
I used to love to do this and would look forward every Easter to making them! How much fun! The first time I made one was during a craft night at the church I went to as a kid. I have vivid memories of a "holier-than-thou" church lady who made a very nice egg and then dropped it, destroying it, and then she cursed for a long time, extremely loudly like a sailor! Wow- I got an education that day!

Anonymous said…
by the way- do you know of a place off hand where I could get the equipment to do this? The stuf we used years ago was extremely crude.

sue said…
Great eggs! I've gotten together with my neighbors to do this (on one of our "craft nights", which always involve a lot of wine drinking... ) Our resultd were great, too, but not as professional looking as yours. Very artistic.
5:16 PM

Stefaneener said…
Next year, we'll have to coordinate Frisbee schedules : )
Looks like a wonderful day; I'm so sorry I missed it.
6:04 PM

. . . Lisa and Robb . . . said…
I added links at the bottom of the blog post, telling where people can buy supplies. It's really fun, and everyone should try this some time.