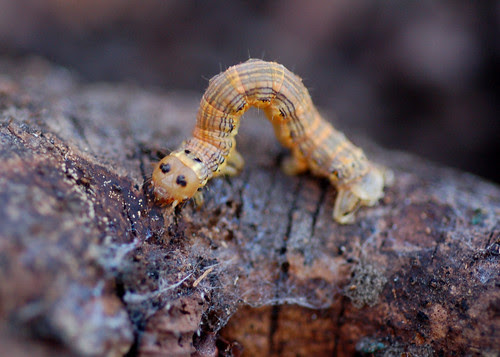 While most of the nation was watching football, Robb and I were attempting to tackle a huge backyard project. Our yard was an utter disaster when we bought our house, and despite all the work we've done, most people would still consider the place a huge mess. Today, we teamed up to do something about one of the worst areas. 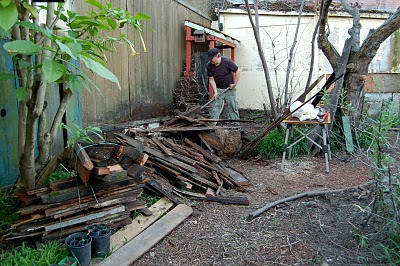 Robb dragged out his chop-saw, and set to work, dismantling the huge pile of decades-old lumber that's been languishing at the back of the yard. He's several hours into the project when this photo was taken. Notice the green arc shape on the wall above where Robb is working. That's how tall the pile of discarded lumber was.

In the front of the photo, you can see bundles of soggy lumber, wired together for ease of transport. We'll be scheduling a bulk trash pickup, as soon as we have all the wood cut up into manageable chunks. There's precious little worth saving in this heap. A few redwood boards, which miraculously haven't rotted. A lot of moss, and a whole menagerie of strange creatures. That inchworm-looking varmint shown above was probably the most unique living animal we saw. Robb uncovered tons of woodlice, beetles, more spiders than you could shake a stick at, some truly gigantic earthworms, and my buddies, the slender salamanders. Because Robb knows how freakishly tender-hearted I am, he worked carefully to avoid injuring any of them. 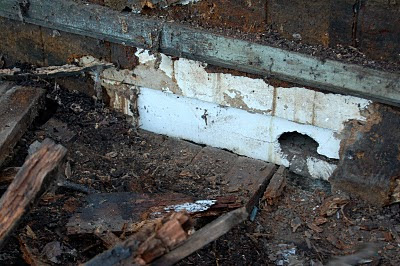 We suspected that there were rats in the wood pile. We would often notice Cardigan and Sleeves, staking out this part of the yard. Sure enough, Robb unearthed a rat sized hole, leading into the neighbor's garage. It's not particularly clear in this photo, but the hole was clearly made by rodent's teeth. They chewed right through cinderblock. Horrifying. 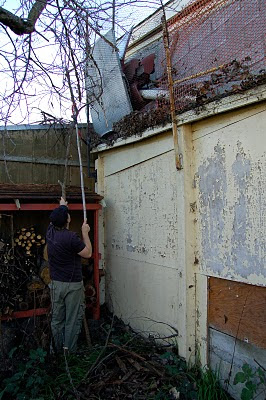 While Robb was dis-assembling the rotting lumber yard, I was tearing up massive amounts of invasive oxalis, and chopping down unproductive blackberry bushes (they're really weedy, and don't get nearly enough sun to produce fruits). I also sawed down a number of straggly half-dead elm trees that were crammed in the corner, competing for the same resources as our plum trees.

It took me a long time to admit that the elms were never going to make it. They really didn't even manage to grow leaves last year. But I have a pathological need to drag home every sick plant I find and try to nurse it back to health. Sometimes this works. Often I just drag out the plant's death.

Sawing the elms down was hard enough, but getting them out of the part of the yard we call "the thicket" was worse. Several of the elms had grown in a spiral, and even after I sawed through their hard, green wood, we had to struggle to move them.

One in particular had embedded itself in the neighbor's fence. 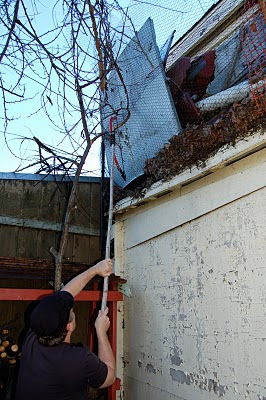 Robb bungeed our bow-saw to a bamboo pole, and we laboriously cut the tree loose from the oh-so-attractive chicken wire fencing. I love how resourceful Robb is. I also love how our crazy saw became our "heraldic pennant." We are fearsome weekend warriors, after all.

Wondering what all that other stuff tangled up in the fence might be? As far as we can tell, the big rectangular shape is a car's hood, circa 1976. Behind that seem to be some bumpers or fenders. In addition, there's an extension ladder, and lot of bright orange construction netting. Below all of that is an expanse of rotting plywood.

The cinderblock behind the car hood is the side wall of the neighbor's little in-law house. Our kitty Smog got trapped between our fence and that wall the night we knocked over our beehive.

We've been biding our time, trying to get a handle on the neighborhood dynamic, before we propose fence removal to our neighbor.

For one thing, it's unclear who is responsible for all of this mess. Given the amount of garbage that was hauled out of our garage during the period that the house was on the market, and given that much of that trash was made up of antiquated car parts, there's a good chance that the offending junk might actually belong to us. Then there's the little matter of a language barrier. Our neighbor speaks almost no English, and we don't speak Spanish. We're trying to build up some good will (gifts of fruit and honey, and generally being stupidly polite every time we see him), before we demand that the fence come down.

Frankly, we've got no right to complain to any of our neighbors about any perceived ugliness. Remember when our contractors destroyed all of our old-growth redwood siding -- without our permission? Well, we got into a protracted legal battle with them, and even though we finally settled out of court, the siding has never been replaced.

Until our house looks less like a falling-down shack, we can't complain about a junky fence.

We've got a lot of work, still to do. But it's worth noting that five years ago, neither Robb nor I had any idea of he would ever walk again, and now, he's able to do some pretty challenging yard work. Sure, he still takes a lot of laying-down breaks, and has to be extremely careful of his balance. And, sure, he'll probably be hurting tomorrow. I think he's really happy to be able to do all this.
1925 cottage garden neighbors Smog work

Anonymous said…
It sure is gratifying to those of us buried under snow and ice to see someone working in the yard and not even wearing a coat! -Rose
6:42 AM

Anonymous said…
Our neighbors place that is up for sale has a terrible amount of junk over there- We planted arborvitae trees and they cover the offending view nicely. And birds LOVE those trees! If the junk you are talking about is indeed yours I suggest you recycle it- me made a nice bit of cash from weird old rusted crap we dug out of the earth and hauled out of our barn that was no good for anything anymore. Car parts are great to recycle. If the junk is not yours and you have no say about it- I suggest you put up some cheap nylon netting (fruit netting for trees) and grow lots of morning glory plants. Or maybe climbing roses as more permanent cover. My neighbor wanted to tear down a shared fence when we moved in that separates our yard from his field, bu I loved the old fence, and now that it is painted he doesn't mind it so much. Its also 200 years old and I've always loved it. And it keep the deer out of my garden!

Curbstone Valley Farm said…
It's good to see Robb out and being so athletic in the garden. I know from experience that gardening is great physical therapy! I feel your pain on the junk front. We've been clearing up the previous owner's mess for four years now, and we still occasionally find an old bed frame, or piece of an old metal satellite dish buried somewhere...beer cans hidden all over the place, and various other piles of crap. Over time though, as you keep whittling away at it, it does transform, and the junk disappears. Your garden has already transformed so much, sometimes I think it's hard to see it when you have shovel and saw in hand. We'll both get there...eventually. As for cinder-block chomping rats...ouch! I hope he broke a tooth :P
8:40 AM

Gina said…
It's so amazing and heart-warming to see Robb out there! I bet he's in MUCH better shape than us right now, snuggled in our blanket and fighting the cold with soup, ice cream, and Guinness! You guys are inspirations.
12:11 PM

Karen Anne said…
Looking again at the photo of your house with the siding ripped off reminds me of the day I came home from work and the gutter replacement contractor had sawn off the ends of all the rafters on my California bungalow "because they were in the way."

Really, you don't know whether to cry or commit murder.
9:27 AM