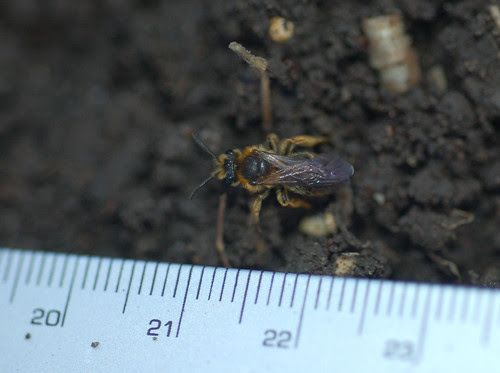 I was planting my baby kale in the garden today, when I noticed a tiny bee, trying to burrow into the soil in my seed-starting tray. I had read about how certain species of bees lay their eggs underground, so I had a pretty good idea what she was up to. Clearly, a seed tray was not an appropriate place for her to be trying to raise her family.

As gently as I could, I lifted her out into the freshly-loosened soil of my garden. This was not an easy task. The little bee was determined to burrow into the dirt, and I was terrified of crushing her. 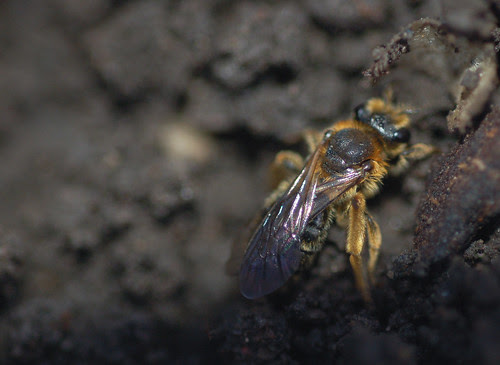 As soon as I had her safe on the ground, I ran inside to grab my camera. The light was failing, and this little girl was moving fast, so these photos are really terrible. But hey, they're the only photos I've ever taken of this type of bee! Look at her wonderfully hairy legs! I'm charmed by her golden fur.

A quick internet search turns up an alarming number of companies that will kill burrowing bees. Once I filtered out those sites, I learned that there are hundreds of species of mining or digger or andrenid bees, and that some of their burrows can reach two feet deep. I also learned that these little bees are only active at dusk and the early evening. They are crepuscular, which is a world I don't get to use as often as I'd like. Like many of the more "obscure" bee species, these little bees are important pollinators.

If you look at the top photo, you'll see that this little bee is only about a centimeter long. And you will also see that I'm the kind of idiot who takes a yardstick into the garden in order to neatly space my plants. I may be a total dork, but I'm a dork with good photo-documentation. 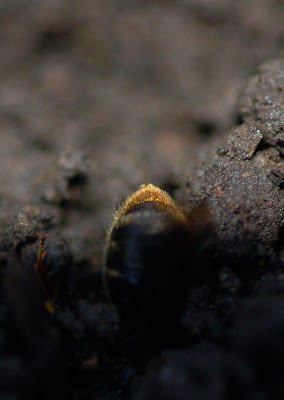 The little bee tore into the earth, and within seconds, she was gone! The sun was setting, and her little furry bottom glinted golden just before she vanished.

I didn't want to disturb this bee, who had worked so diligently to start her nesting burrow. So I marked the spot with an old tomato cage. I wonder if I'll see her, or her family, some time in the future? Even if I don't, it's nice to know that she found a home in my garden.

While all this was going on, the feral cats stole and ate my leftover lunch.
bees delightful garden

Lisa Voith said…
I saw some burrowing bees last spring in a friend's planter box. They looked like honeybees without stripes. They even came back with loads of pollen in their britches. I guess a small group of queens made their home in the same planter because it really was a perfect spot. They were gone by summer.
6:09 AM

Anonymous said…
Another wonderful informative tale. I love reading your blogs. You have a peaceful but entertaining way of writing. And your pictures!! Even the ones at dusk - always amazing. I love your eye for nature. Thanks for the great tale of a soon to be momma bee. I love that you are quirky enough to take a yardstick to the garden. Seems to have come in handy when your unexpected visitor arrived. Naughty kitties for stealing your lunch - a touch of humor to end your story. You have created quite the oasis in your yard - I love it!!
Gypsyladybug
7:57 AM

Town Mouse said…
That's so interesting! I'm trying to learn more about bees. There's so much I don't know. BTW, the UC Berkeley Bee Garden will be open to the public as part of the Bringing Back the Natives garden tour. Here's a link to their site: http://nature.berkeley.edu/urbanbeegardens/
7:46 PM

Meredith said…
I'm so glad you were there to move her and document her and appreciate her and share her! I love bees, all kinds, and did not realize before that there are crepuscular pollinators -- which is annoying me because we tried to pursue a no-kill organic philosophy in the garden last year, and one thing we sprayed said not to spray until dusk to avoid hurting the bees, with the idea that by morning the stuff would dry and not be a problem. Apparently that strategy may not be all that bright...

growingagardenindavis said…
How cool is that? I just wanted to let you know the Seed Bank changed their hours from what the web site had and are open on Sundays right now...you should call and confirm.
8:22 PM

Brad said…
Great find. The Bay Area (or was it the East Bay alone) has some 80+ native bee species, most of which make nests in the ground. The native bee garden at UC Berkeley is a small section of a much larger plot of land on Oxford a couple blocks north of Hearst (don't remember the exact cross street). It will be open as Town Mouse said for the native plant tour and will probably have some talks. The bees can't dig through mulch, so it's important to leave at least some bare dirt areas in your garden so they can nest.
11:54 PM

You might want to consider planting a permanent plant in that spot- like sorrel, for example. The bees nest wont get dug up over time, then. Years ago I took kids on nature hikes by Camp David, and we knew beforehand the locations of underground bee nests, since they remained in the same spot, year after year.
11:59 AM

Bethany said…
I'm so happy to find another person who takes a ruler with them to the garden...how else will anyone believe that we picked a tomato "this big"?! Good on you for helping a bee in need, they need protecting!
1:21 PM

Karyl said…
I love this! It's comforting to know that there are other dorks wandering quietly about their back yards. The little bee is lovely. Keep us posted on her progress.

Last year I learned in a similar fashion what a great gold digger wasp is. They are curious and will follow you around, fly in your face. Big, too. I kept having to tell myself, "GoodBugGoodBugGoodBug".
4:49 PM

. . . Lisa and Robb . . . said…
Karyl --- I wonder if the Gold Digger Bees are attracted to the carbon dioxide that you exhale? We are told that European Honeybees are, which is why they tend to fly at one's face.
8:03 PM

Anonymous said…
Hi Lisa and Robb,
We are in class right now with Barbara! She just showed us this awesome blogspot! We would like to know if bees smell fear?

Talk to you soon,
Ms. Gerardi's and Mrs. Jordan's science class
7:13 AM