Over the past few weeks, Robb and I had been hearing a strange, loud, and intermittent "chirp" sound, out in the back yard. We found this sound very hard to pin-point, and I think that was driving Robb crazy. It seemed to move around the neighborhood, and it seemed to come from somewhere just above our heads.

I mentioned this to Robb, who did a little digging around on the internet, and found out that what we had been hearing were the mating flights of the male Anna's Hummingbird. 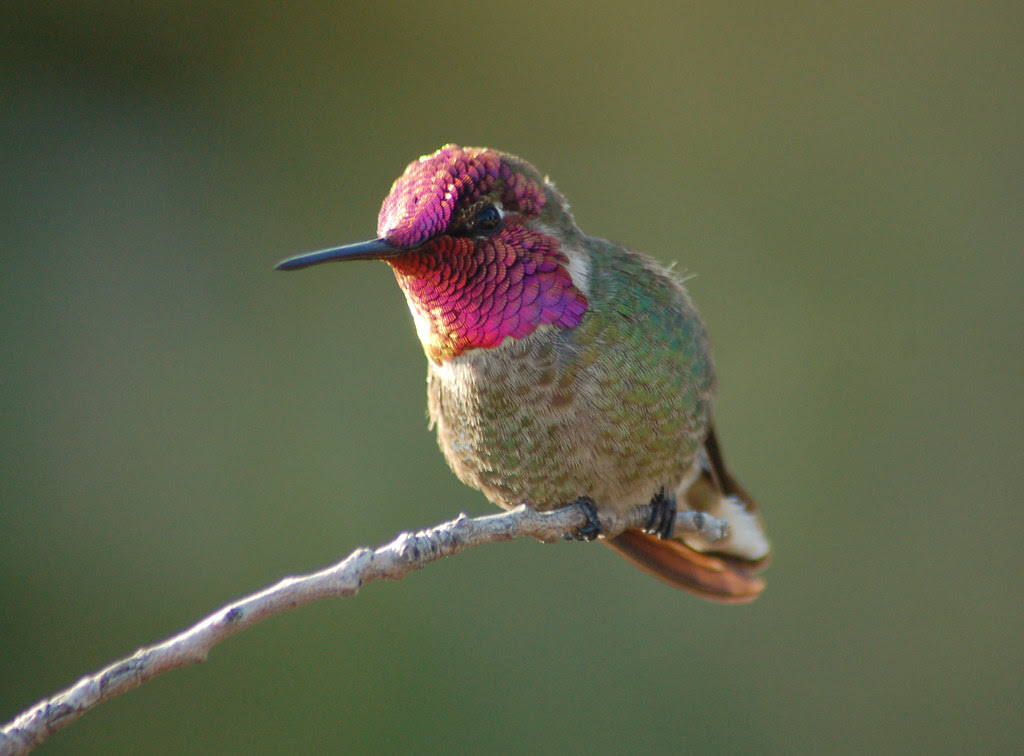 When the males are courting the females, they fly up to a hundred feet in the air. (Let's just say that again: a creature who weighs less than a nickel, flies a HUNDRED feet in the air.) And then, they swoop down in a J-shaped arc, at about FIFTY miles-per-hour.

And at the curve of their swoop, they flare their tail-feathers for the briefest moment, and the wind whipping over the bird's two outer tail feathers creates a loud chirp sound. This is akin to blowing over a kazoo. Female hummingbirds, we are told, find this extremely alluring.

Once Robb mentioned this, I remembered hearing about this research, which was done using high-speed cameras at the Albany Bulb. Students from the University of California at Berkeley set up a stuffed female hummingbird, and filmed the males who vied for her affection. The researchers then (goodness knows how) caught a couple of hummingbird, and trimmed or removed their outer tail feathers (which are not need for flight, and grow back in a little more than a month). They then documented that these particular birds could no longer make the chirp sound. 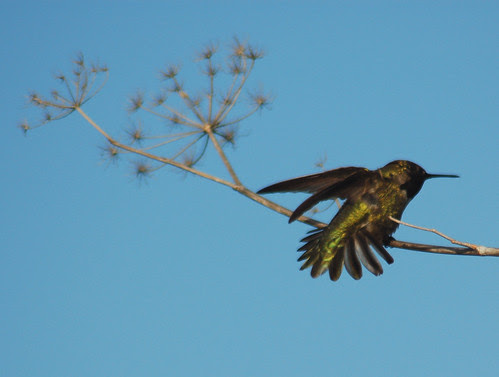 Further studies were done in wind tunnels, to determine that the birds needed to reach huge speeds, before their feathers would create this peculiar (and LOUD) sound.

We're now learning to locate diving male hummingbirds, once we start hearing the chirp sound. It's actually hard to keep an eye on them for the entire flight pattern. They fly so high up, that they're almost gone from view.

If you want to read more about this fascinating little bird or hear sound clips, click here.

A male Anna's hummingbird caught
during a display dive, compiled from high speed video.
At the bottom of the dive, the bird flares its tail for 60 milliseconds.
The inner vanes of the bird's two outer tail feathers
vibrate in the 50 mph airstream to produce a brief chirp.

Anonymous said…
Dear Lisa, How amazing that you have hummingbirds in your garden. That sounds so very exotic to me. And the photograph of the flight of the hummingbird, well that was just magical.

Thank you for your message on Blotanical. Yes, there is such a verb to topiarise. I think that it gives the process a more mysterious feel and distinguishes it from the cutting and shaping which may happen at the hairdressers!!
2:20 AM

Diana Studer said…
That is the sort of story you couldn't make up if you tried. Our little sunbirds, look similar, but without this spectacular courtship performance.
2:30 AM

Anonymous said…
Very funny - Reminds me of the guys at the beach who flex muscles. "Yo Baby Yo" ....

Anonymous said…
Wow, that was fascinating. Thanks for sharing it! You also helped me identify the hummingbird with the iridescent hot pink (fuschia?) neck feathers that I saw last week, as a male Anna's hummingbird.

Anonymous said…
So basically, the noise was "the neighbors" having sex?

He and his work have also been featured on PBS's "Nature" recently.
--greg
3:10 PM

Gail said…
Lisa, What a beautiful post and I loved hearing the chirp when I followed the link...it's quite high pitched isn't it! Now to read about the spider in your previous post! gail
7:38 PM

Carol said…
Wonderful post Lisa! Your photos of the hummer are outstanding!! I love watching the Ruby-throated hummer we get go up in the air and fence with his rivals. We are so lucky to have these jewels in our lives!! ;>)
12:51 AM

John and Diane said…
We have both rufous and broad tailed hummers here in the summer and one of them (I forget which) makes a big diving display also but sounds NOTHING like your Anna's hummer - very intersting! Never heard a chirping sound like that. Very cool. Waiting to hear the sound of hummers, waiting for spring - like pre said, it's been snowing here still, bleah!
-D
7:19 AM

Jennifer AKA keewee said…
Thanks for stopping by Keewee's garden. I too have seen the hummer's swooping flights with all the chatter going on, but never got around to researching their antics. Thanks to your comment on my blog, I now know what is going on. I will have to pay more attention and search out the females waiting to be impressed by the male's display.
9:58 AM

Marg said…
How cool are hummingbirds? No to mention, feisty, cute, and tough!

thanks for this post-fascinating!
7:31 AM