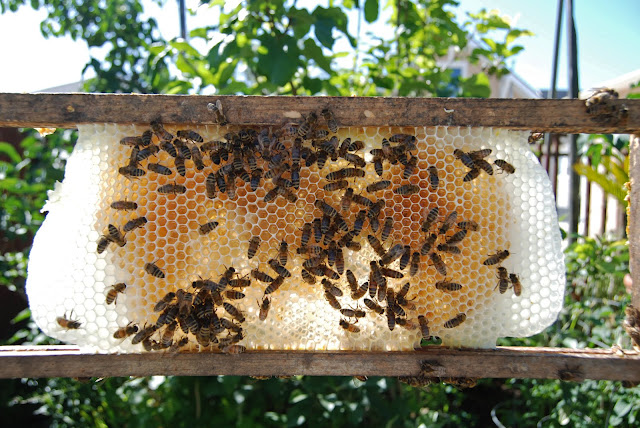 This weekend, I opened up my three hives, to see how the bees were doing.  Overall, things looked good.

The Empress Norton hive was building beautiful new honeycomb.  I prefer to let my bees build the structures that suit their needs.  Typically, I'll inter-leaf older wax comb with empty frames.  The bees will build their own structures, within the confines of the existing honeycomb. This keeps the comb relatively parallel, which means there's less damage when I remove a unit of honeycomb from the hive.  There's nothing worse than dragging honeycomb against itself, ripping open the comb, and drowning the bees in their own honey.  By alternating straight comb with empty frames I'm encouraging the bees to build in a relative orderly manner. 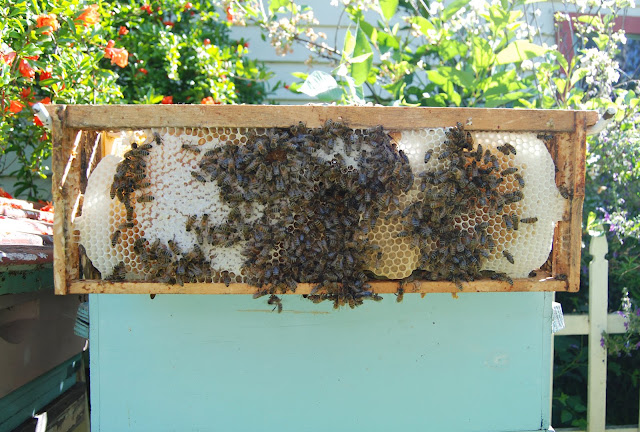 The bees are building beautiful structures from the wax their bodies produce, and behind them my pomegranate and cherry trees are blooming. 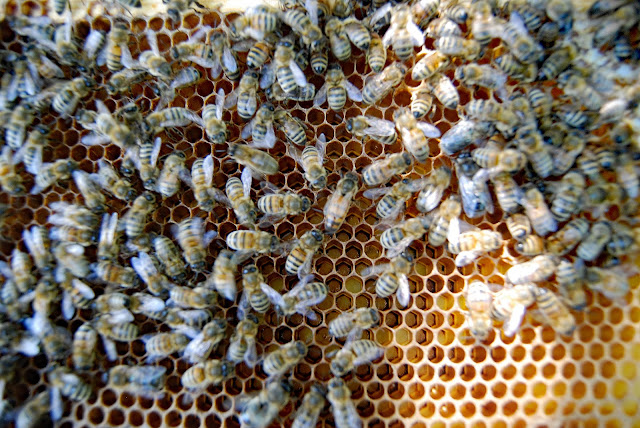 I believe I managed to spot the young queen in the colony that I split off from the Empress Norton Hive.  My photo leaves a lot to be desired, but you should be able to find the bee I think is the queen. She's just to the right of center, with a bit of space all around her.  She's little longer than the other bees, and she's facing up and to the right. 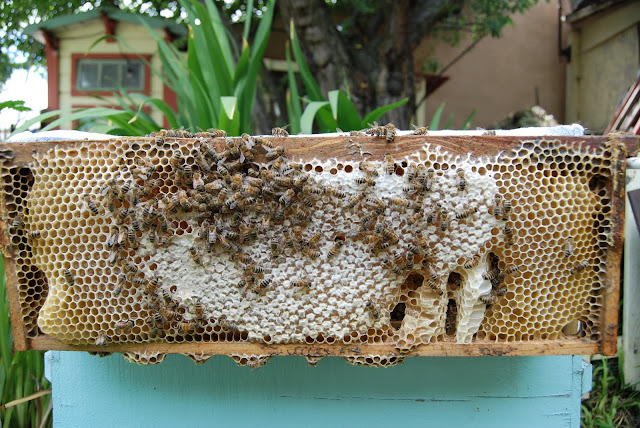 The new queen doesn't seem to be laying eggs yet, but the rest of the colony is hard at work. They've filled all this comb with honey, and capped the honey storage cells.

Notice how the bees leave corridors between the frames of comb. 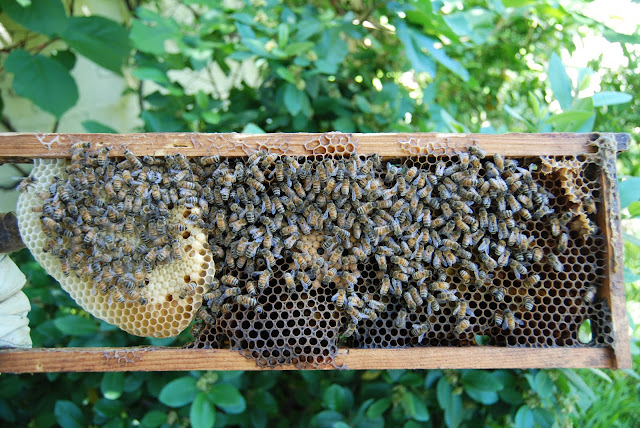 The Elpseth hive that I got from my friend Lori is small but mighty. The queen in this colony is laying eggs.  The capped cells in this photo contain developing bees, which is very encouraging.  Notice the difference between the color the new wax on the left, and the older wax on the right.

With one exception, I was delighted by what I found when I inspected the hives.  The bees looked healthy and industrious.

I did notice a single small hive beetle, which is an invasive African pest that can do massive damage to a beehive.  I am going to have to take action to discourage these creatures from overwhelming my hives.   Because American beekeepers transport their hives all across the country for agricultural pollination, pests and diseases spread like wildfire. For a while, it seemed like this pest was only found in the southeastern states, but now they're established in California, and we need to figure out how to keep them under control.

I did not harvest any honey this week, only because I'm temporarily out of storage jars. There's a bit of urgency to get honey our of the hive, if I'm dealing with small hive beetles. The beetles can burrow through the wax comb and contaminate the honey.  They can also destroy the developing bees, which is distressing.

I spent the last few weeks putting honey into jars and melting down beeswax.  I've got to order more jars and put more honey into safe storage.

If you're interested in reading what other gardeners are up to this week, check in with the Harvest Monday jamboree at the Happy Acres blog.

"Small but mighty" is a good moniker for Elspeth's bees. We're going to try and combine those bees with Lauren of Locksley's bees (in a split), because Elspeth's two swarms resulted in serious depletion and no queen for the rest of the hive. Poor little ladies!

Trying to entice a swarm into our bait hive now.

My great-grandfather was a beekeeper in Ohio, who then moved to the Verde Valley in Arizona for the crops there. Eventually they moved to Orange County in California for the citrus. They sold queens to beekeepers all around the country by mail as I recall from my grandmother's recollections.

You got some great photos! I miss our bees, but not the problems we had with the hive.

I've heard of hive beetles, that is very worrisome. Hopefully by catching them early on, you can find a way to eradicate them quickly. Your pictures of the bees at work with their honey comb is beautiful. The lives of bees is so interesting.

I do hope you manage to get those beetles under control... glad you managed to spot one before any damage was done. Happy Harvesting this week!!!