Of Weeds and Tweeds 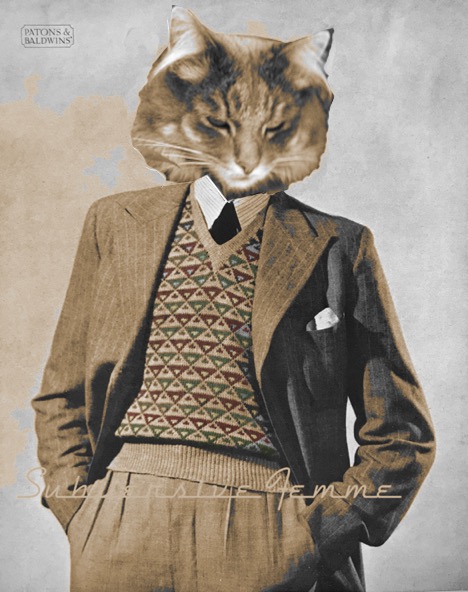 I'm trying to catch up on documenting the projects I've been working on lately.  Ive been going through a rough time, and I just let my writing languish.

For instance, there's this silly project.  Robb and I have been participating in vintage themed cycling events, which I've written about previously.  I've been wanting to make Robb a knitted waistcoat for some time.  Of course, I can't do anything the easy way, so I decided to use a vintage knitting pattern as well as yarn I'd dyed with invasive plants or garden trimmings.

(The model on the original pattern gave me the creeps, so Robb collaged our kitty Smog's head on the picture.  Totally normal thing to do.) 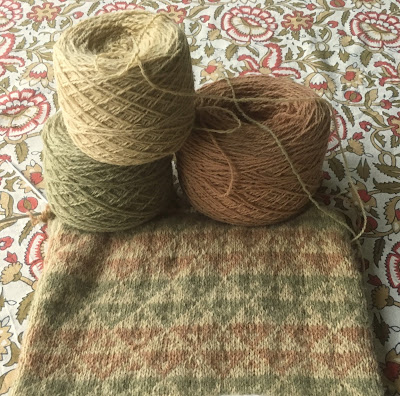 The yellow yarn was dyed with super-invasive broom plants.  The green was cardoon leaves dipped in an after-bath of rusty iron-water (made with all the terrifying nails I've dug up in the back garden over the years).  The pink color was made with the bark of twigs from my pluot tree. 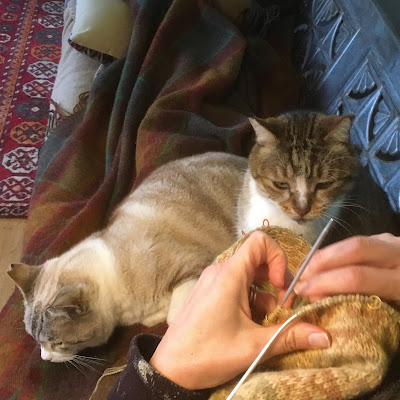 The cats were incredibly helpful. 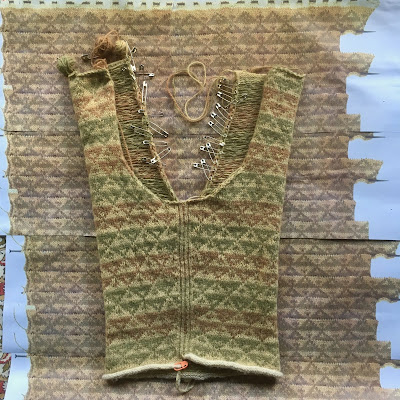 This garment was one of those one-sze-fits-somebody patterns, that are fairly common among vintage patterns.  When I'm trying to visualize the fit of a complex knitting project, I'll often make multiple photocopies of my swatch, and tape the images together to understand my project in full-scale.

This pattern only had patterned knitting on the front of the waistcoat.  This was probably for a number of reasons.  First, it would be uncouth for a gentleman to remove his jacket in public, so why bother decorating the side that nobody is going to see.  Secondly, there's the issue of warmth.  Multi-colored stranded knitwear is twice as thick as plain knitting, and so a waistcoat that is stranded on the front and back might be ridiculously warm.  And anyway, stranded patterns use up a lot of yarn, and take a lot of effort.  So why not do all the tricky stuff where there will be a payoff for one's work.

Even though vintage pattern advise knitting stranded patterns flat, I much prefer to knit them in the round.  Managing multiple colors of yarn on the purl side is my idea of torture.  So I knit the front of Robb's waistcoat as a sort of tube.  I knit from the bottom up, and once I'd passed the armholes I had to knit flat. 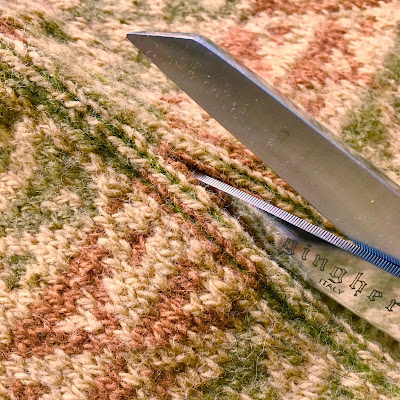 The tube was stabilized and then cut open.  This is always a bit nerve-wracking. 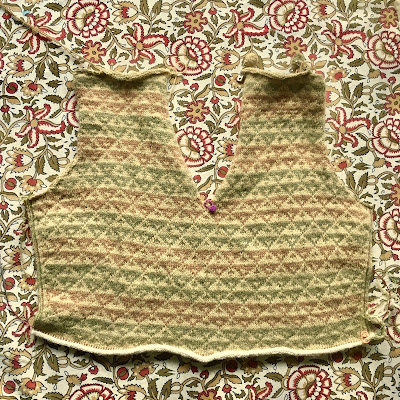 This seemed worryingly short, for a man's garment.  But I charged forward. 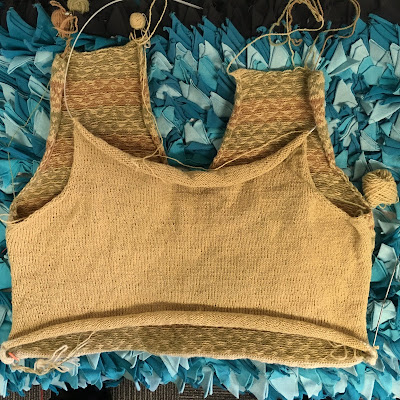 By the time I started on the back, I had pretty much given up on the pattern.  As I figured it, the original pattern would fit a pre-teen.

But here's the puzzle:  If no polite man would take his jacket off, there are damn few images of what the back of a 1930s knitted waistcoat should fit like.  Thankfully, my friend Star, tailor extraordinaire helped me out on this front.  (Or back.  Whatever.) 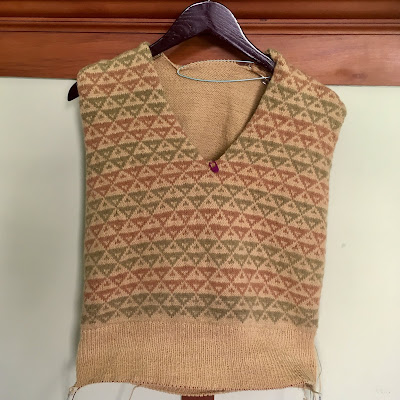 I sewed up the side seams, and knit the ribbing.  The original pattern called for the ribbing to be knit first, but I held off because I was worried about running out of dyed yarn.  I figured that if I came up short, I could substitute something else for the ribbing, the armholes and the neck. 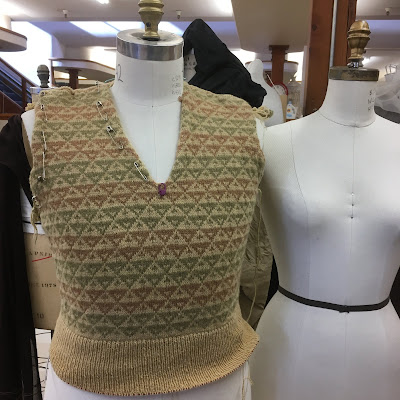 And this is where I realized that this garment was Just Too Damn Short.  Once again, Star stepped in, and got me back on track.

At this point, the event I wanted to make this garment for was days away.  Things looked dire. 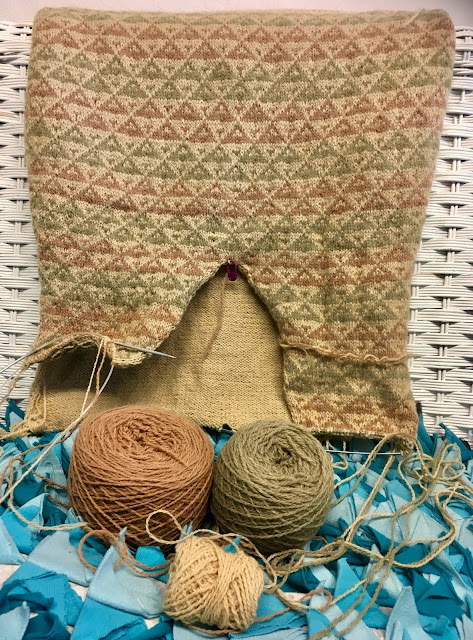 I had to rip back the front and knit more length on the body.  At this point, I started getting nervous about running out of yarn.  It's not like I could go to the store and buy matching yarn. I had what I'd dyed, and no more. 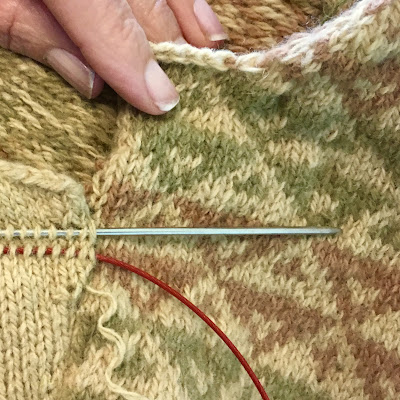 Did I mention how much I don't enjoy doing stranded knitting flat?  The purl rows just about killed me.  Poor Robb was listening to me swear as I knit, and wondering if he should make other plans for his outfit. 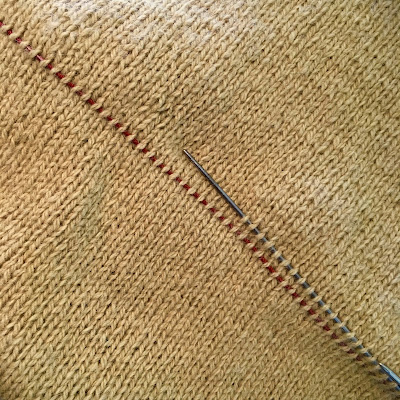 Instead of ripping apart all my shaped knitting on the back, I took a more surgical approach. I wove a knitting needle through existing stitches, and snipped out one row. 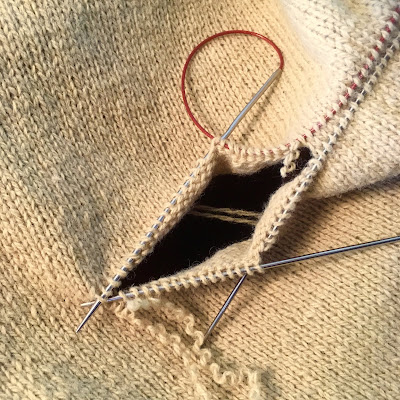 This was exacting work, but it took less time than reknitting much of the back. 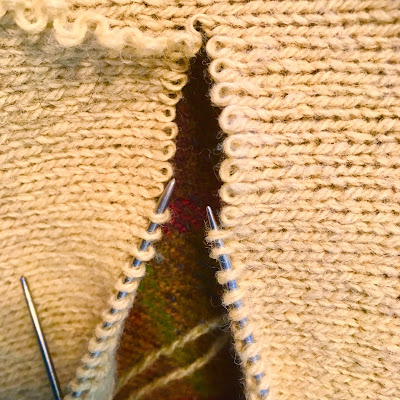 I started calling this "open-heart surgery."  Robb was very polite, but I'm sure he was worried that I wouldn't get this done in time.  One thing working in theater has taught us, is all about Making Art On A Deadline. 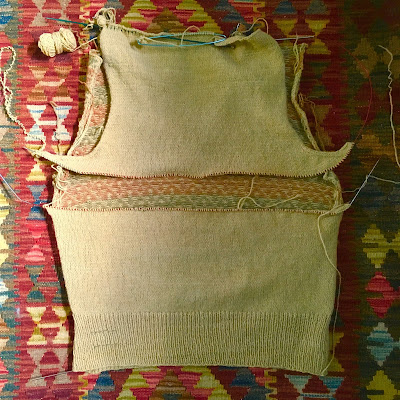 This shows how much I needed to fill in.  Definitely better than reknitting the whole upper section.

I stayed up very late the night before the event, sewing the seams together and kitting the armholes and neck opening.  I sewed in yarn ends on the entire drive up to Sacramento. 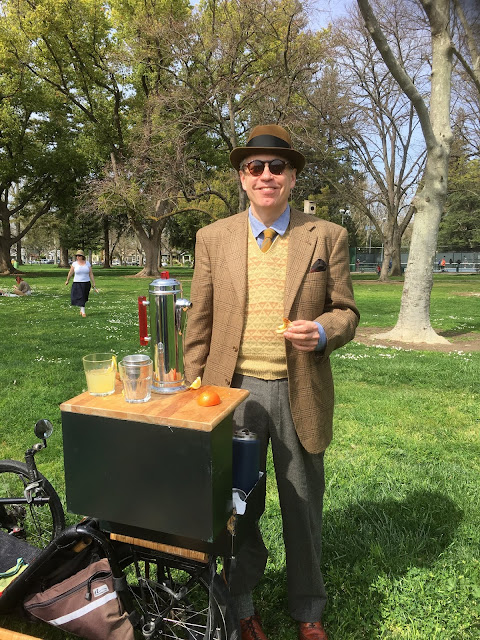 And it was all worth it.  The vest fit beautifully.  Robb won an award for being the most Dapper Gent at the Sacramento Tweed Ride. 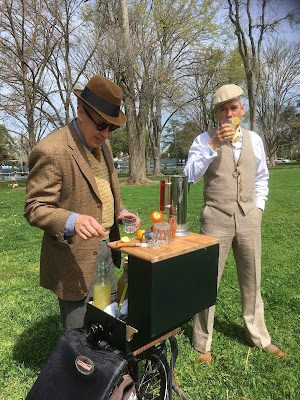 We also won an award for Picnic Royale.  (Ironically, we each got the award for the work that the other person had done.  Robb built this splendid fold-out trike-mounted bar, served two kinds of cocktails, and made sandwiches and teacakes.)

It's kind of a running joke that Chris (pictured above) is excluded from fashion competition, because he's Too Perfect. Chris exists on another plane from the rest of us more mortals. 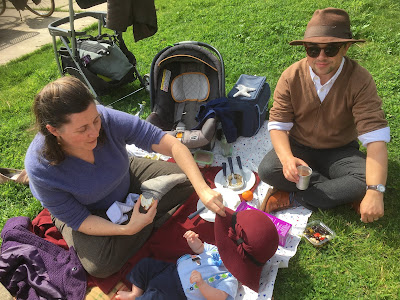 And how was the Sacramento Tweed Ride?  We got to spend time -- not nearly enough -- with friends and family. 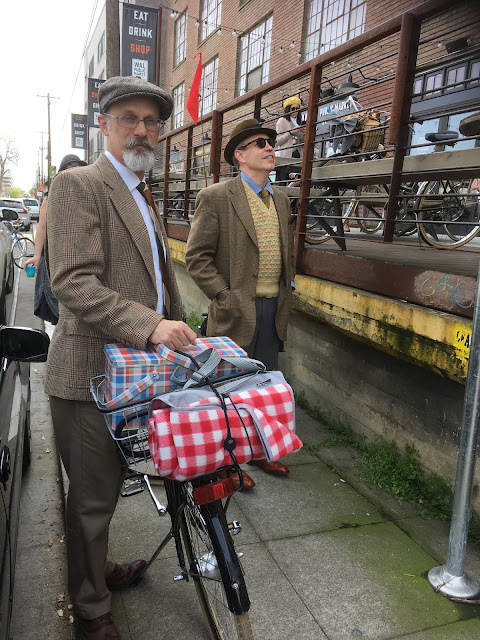 Everyone was stylish and super-nice.  I just love this community of weirdos.  Some fancy-dress events can be really intimidating, because everyone is so caught up in being perfect, and because people end up only talking to people they already know.  The vintage cycling folks are so down-to-earth and friendly.  If you show up, you're automatically considered a friend. 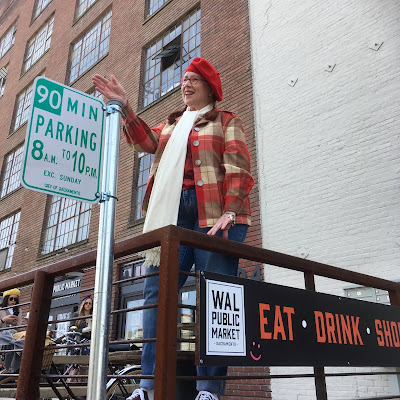 And this is no accident.  The ride organizers do superlative work to make everyone feel welcome.  Our friend Jennifer came up with us, not knowing a soul.  She had a bit of trouble on the vintage bike we'd loaned her, and our wonderful ride organizer Lynne swapped bikes so that things would go more smoothly.  How's that for great hostessing?

Also check out Jennifer's blog post on refashioning a thrift-store men's sport jacket, and making it into a garment that passes for high end women's vintage.  She won the award fro best-dressed lady.  THIS is up-cycling done right. (Up-cycling at a vintage bike ride.  Yeah. That's me again, with the inadvertent word-play.) 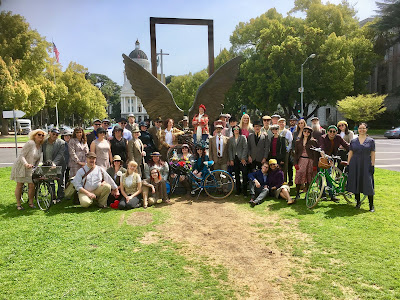 I swear that despite the aggravations and set-backs, I lead a truly magical life. 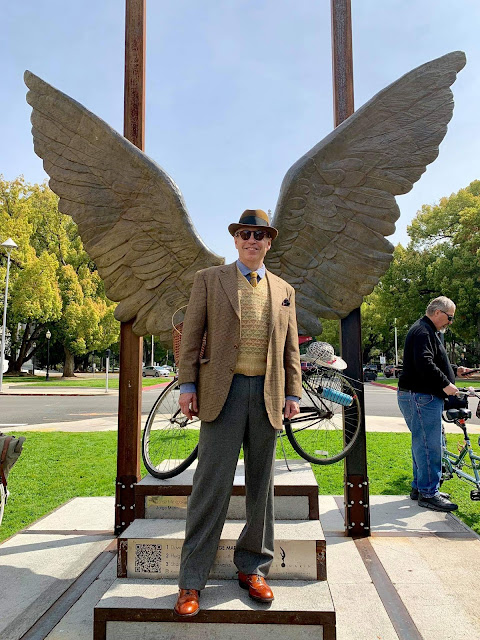 cycling dyeing food friends knitting vintage clothes we made that

Anonymous said…
I have to ask: what does the expression “weeds and tweeds” mean? Thanks!
6:34 PM

Tweeds refers to the name of his sort of cycling event, which is known as Tweed Rides.

It’s just a rhyming phrase. It combined he themes of this essay.
9:20 AM