Showing posts from July, 2013
Show all

When you Name the Cats "Sleeves" and "Cardigan" 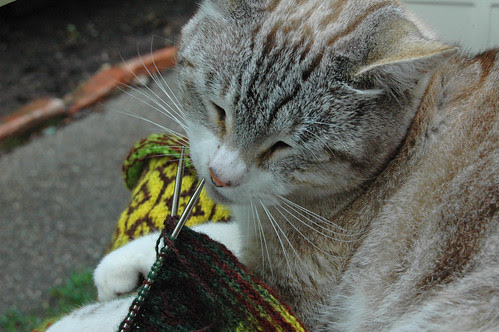 ... You can really complain if they're interested in knitting. I'm still chugging along on my knitting.  I have to admit that I wish I'd reversed the placement of the colors, and let the brown be the dominant shade.  Oh well... It's still a comforting, wooby sweater, even if it is covered in pussycats.
9 comments
Read more 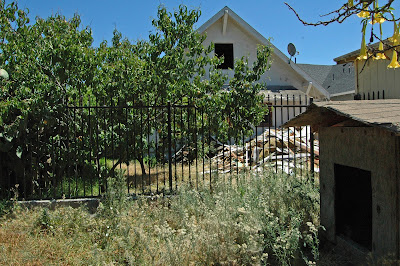 ... The house behind ours has been vacant for months and months.  It languished on the market for ages, and finally sold back in April.  As far as Robb and I could tell, nobody had set foot in the place until the recent July 4th holiday.  While Robb and I were tidying up for our backyard party, workers were smashing glass, demolishing walls, and throwing the debris out the second story windows. Every smash made me flinch, not because the workers were making so much damn noise, but because they were trashing what little historic charm that poor house had left. Hours of destruction on a national holiday was followed by ...  nothing. Nobody has been back to clean up the mess.  This gigantic heap of crap has been sitting unattended for the past two weeks.  The gaping windows are uncovered, no doubt inviting all the local pigeons inside. I have a foolish sympathy for older homes. I have this idea that they have a spirit, and need people to love them.  This poor house is no
11 comments
Read more

Throw Caution to the Wind 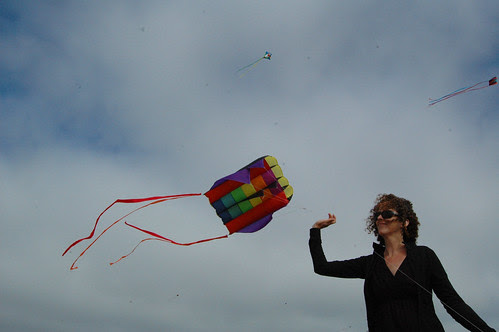 ... Today, Robb and I rode our bikes to the Berkeley Kite Festival .  The sky was filled with color.  The wind was gusting.  Everyone was smiling and laughing. What is it about the simple act of launching a fragile object into the sky that elicits so much pleasure ? The giant flying octopi are a bit of a fixture in the Berkeley landscape, but that doesn't make them any less wonderful or surreal.  Robb observed that the sky full of flying color, combined with the pavilions and crowds made the whole place seem like a scene from a Harry Potter movie. We left our stunt kite at home, and simply enjoyed the act of harnessing the wind and gazing at the sky. I took this photo a few years ago , and it still makes me laugh.  Robb versus the Squids.
2 comments
Read more

Working with the Sirs

... There's been a long silence on the blog because I've been buried in work. Berkeley Rep (where I'm in charge of painted scenery) is producing the pre-Broadway run for No Man's Land , starring Patrick Stewart and Ian McKellen.  As you may imagine, we've all been very busy with this project. Very busy and very excited. The set is beautiful, and rather huge compared to what we've been doing lately.  We've filled our regular workspace, and have pushed out into the as-yet-undeveloped warehouse, just outside of the rehearsal hall.  It's quite uncanny to work in ear-shot of such famous voices.  The weather has been lovely, and so all the painters have been eating lunch outside which just coincidentally is where all the actors have their lunches.  Imagine that.  How strange that such famous artists would want to eat at the next table to ours. In truth, we don't interact with the actors much at all.  Nodding hello is about
5 comments
Read more

So, How's That Sweater Going? 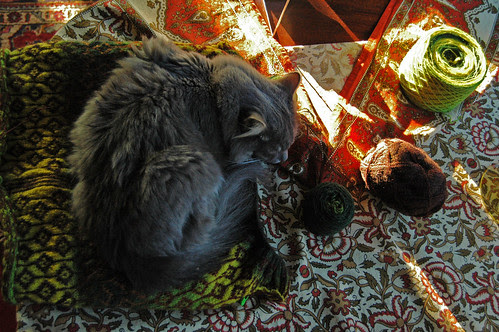 ... Well, Smog seems to like it. Just like the vintage ski sweater it's modeled on, now that I come to think of it.
3 comments
Read more

Been a While, Huh? 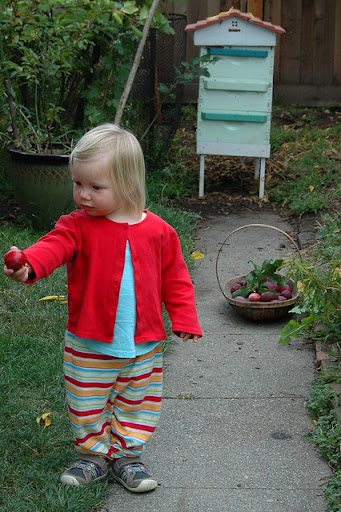 ... Things have been quiet here on the blog.  Mostly because life has been so hectic.  I'm working on a huge project that's heading to Broadway, and that stars Patrick Stewart and Ian McKellen .  As you can imagine, that's been my major concern.  Blogging has fallen by the wayside. Otherwise, it has been a month of plums. I swear, I've said the word "plum" about ten thousand times in the past six weeks.  Our tree put out an incredible crop, which we shared with everyone, including our fruit-crazed hens.  The plum harvest is a great excuse to invite friends over, as was the fact that my friend Mel was staying with us for a number of weeks.  Mel and I go way back.  We know each other from the DC/Baltimore Scenic Painting Mafia, and when I realized I needed one more really top-notch painter, I invited her out to California.  She got to do a lot of touristy things while she was here.  We went to the beach at Point Reyes and went kayaking on Lake Merritt.
5 comments
Read more
More posts