The Lemons Have Ripened! 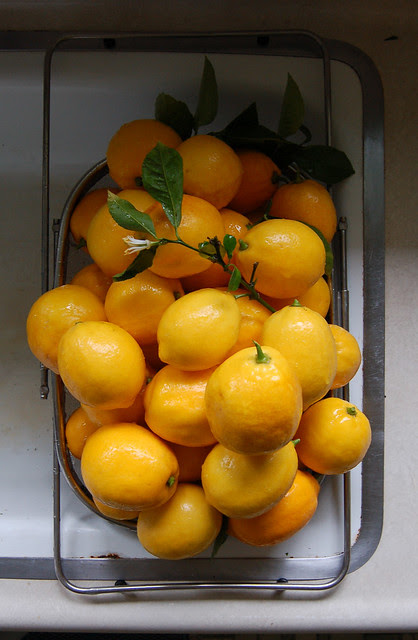 Despite my go-it-alone personality, I quite enjoy pausing every week to notice what's going on in our little garden, and then sharing my observations with a community of garden bloggers.  This activity is inspired by Daphne's weekly blog round-up, which is rather fascinating, if you like that sort of thing.

This week has seen rather cold temperatures in the Bay Area, and worryingly low temperatures in California's citrus growing regions.  The farmers are in peril of losing their crops, which would be catastrophic.  I've been hearing a lot of talk about how all farm subsidies (including crop insurance) should be stripped from American farmers.  The thinking is that this would force farmers to be more serious about their business.  This sort of talk makes my blood boil. I spent seven summers living on a dairy farm (I was painting scenery for an opera company, and they housed me in a 19th century farmhouse).  Nobody, and I mean NOBODY works harder and is more serious about what they're doing than farmers.  To say otherwise is the height of ignorance.  And anyway, it's no lack of seriousness that brings on blight or bad weather or drought.  Our food supply, and by extension our farmers, need protection from these forces.

In the midst of our California cold snap, the fruit on our lemon tree went from green to yellow this weekend, and it looks like we're going to have another gigantic year for lemons.

Our backyard persimmons are just about finished.  I had meant to try making another batch of persimmon jam, but a stupid headcold is slowing me down.

I think wild birds are eating more persimmons than we are, which is just fine.  Our silly hens are terrified of songbirds, and the songbirds in turn are terrified by the downy woodpecker that visited our urban backyard yesterday.  Apparently, woodpeckers like persimmons.  Who knew?
birds chickens food garden orchard rant

littlemissattitude said…
Those lemons look lovely. However, they are making me crave fresh-squeezed lemonade, which is my favorite beverage. They are also making me horribly homesick for the lemon tree we had in our front yard when I was a kid growing up in Southern California. That tree bore lemons all year round. It was marvelous.

Michelle said…
Ah yes, what will most people eat if all the farmers go bankrupt? Our system certainly has it's priorities screwed up.

Your lemons look so perfect. My tree is loaded, too loaded, they're getting big and bloated and ugly and are falling off because I don't know what to do with all of them. Maybe this cold snap will take care of that problem...

What do you have in mind for all those lemons?
3:22 PM

Norma Chang said…
A gorgeous basket of lemons. How I wish I had freshly picked lemons to use in cooking.
5:55 PM

erik said…
Even here in San Diego we've had freezing nights at the coast. Gorgeous picture of the lemons.
8:29 PM

Liz said…
Beautiful lemons they are too. Our farmers are in much the same boat as yours, working really hard with only the occasional good year to keep them going. These days there are comparatively few owner operators as many farms have been merged into huge entities and been bought up by large organisations (many of them outside Australia).
2:39 PM

greg said…
We have about 30 Meyers in this weeks harvest from out three little bushy trees, now to make lemonade.
2:00 PM

It's this sort of post which makes me really wish that I didn't live in Britain, even though I'm way too much of a home girl to emigrate.
10:25 AM