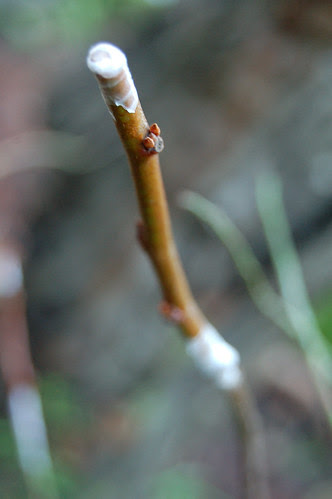 Back in January, I was pretty pleased about this. I had gotten scion wood from Serious Fruit Experts, and had attempted grafting on my backyard plum tree. 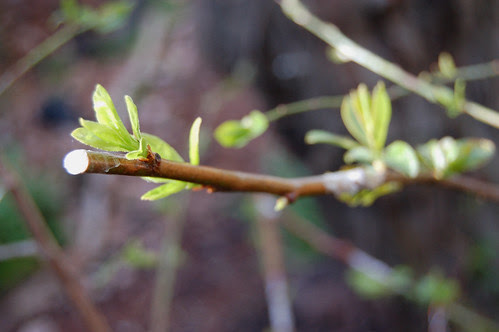 I'm stupidly pleased with myself, now! Four of the grafts have taken hold and are thriving. 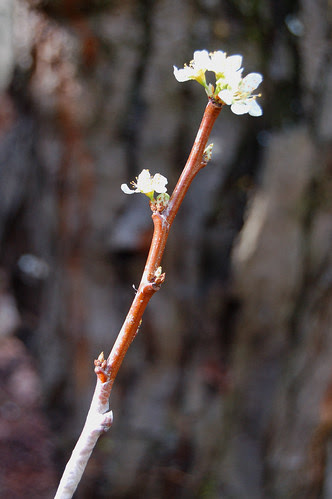 I had been advised not to select scion wood that looked like it would produce flowers, because the newly grafted branch would not be able to support the weight of any fruit that might be produced.

I had only the vaguest idea of how to discern which twigs would produce flowers, and which would send out leaves. Even though this isn't the "best" outcome, it's still pretty magical. We'll enjoy the flower, and then remove any fruit that might form. Asking this tree to raise fruit on this newly formed graft would be like asking someone to move a sofa, after they'd broken their arm, but hadn't been seen by a doctor, yet. (Oh, wait, I did that, back in junior high school. Well, that's a story for another time.) 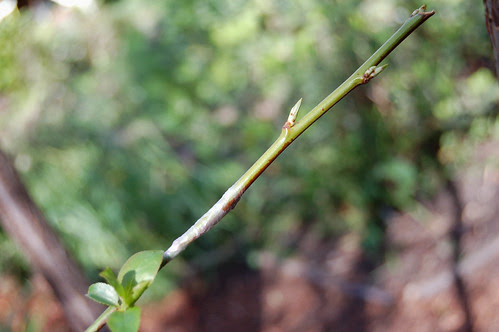 In addition to handing out scion wood, the Serious Fruit Experts were giving away parafilm, a plastic-y paraffin tape. I was pretty stingy with the parafilm, and it's quite clear to me now that if I had had more of this tape, I would have had greater success with the grafts. Only the wood that I capped with tape made successful grafts. All the others dried out, and probably died. In a perfect world, I would have had enough tape to wrap the entire scion twig, but that was not to be. 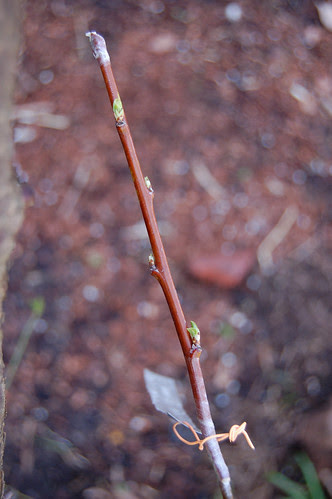 I'm still hopeful that a few more of the twigs might break dormancy, and show signs of life. But even if no more of them do, I'm delighted that I had some success on my first attempt.

For those curious, the varieties that broke dormancy are Elephant Heart, Shiro, Laroda and Inca. They're all Asian plums, and are all supposed to be delicious.

It's nice to have something to be pleased about. I've been sick for days with a brain numbing, energy-sucking head cold. Respiratory ailments are my weakness, and they really baffle me. If I'm suffering from a cold, why did I wake up at 3:30 in the morning with aching kneecaps?


A Year Ago
Loving that Liverwort...

Three Years Ago
There's no bad mood that a park full of hummingbirds can't cure.

Four Years Ago
How many crazy bikes can we ride?

Anonymous said…
How very exciting! At my old house, we had a yellow rose bush that was grafted to a red one. We got red, yellow and amazing orange roses from that bush! Nature is amazing!

Anonymous said…
Your grafting is amazing! i have seen pictures of Elephant plums. i covet them, but aren't NE coast compatible. another point for you west coast gardeners.
-V
5:23 AM

Sue KuKu said…
I knew someone who grafted onto a fruit tree different kinds of trees. I think he ended up with a tree that had apples, plums and pears.

He did it in a rental house. I always wondered what the next tenants thought when the tree started bearing fruit.

Curbstone Valley Farm said…
Awesome news Lisa! For the scions you grafted to existed trees, which grafting method did you use? Whip and tongue? Just curious. We still have two scions to graft to a Persimmon, and am trying to decide how best to go about it.

We used Parafilm too, around the graft union, but at the branch tips we've just been brushing on Doc Farwell's elastic grafting seal. It may need to be periodically reapplied, but so far it seems to work well.
2:37 PM

Stefaneener said…
That's so terrific. I bought a grafting knife and a tube of grafting compound last year, with brave intentions of grafting apples. . . but didn't. I may take a bit of courage from your approach and do it next year.

Enjoy those plums in the future!
9:11 PM

One said…
How can anyone tell; leaves or flowers?

Glad you are using coffee grounds too. I am generous with the application directly on the ground but not with the small pots. Do you use them in pots too?
9:53 PM

V -- I'm just now learning about which fruits do well in our (very strange) climate. If you find a local fruit grower's club, and you're interested, you should see if they do a scion exchange in the spring.

Sue KuKu -- I planted quite a few apartment gardens over the years. Imagine how fun it must have been for the next tenants to discover that tree.

Clare -- I did plain old whip grafts. (That's the diagonal slice, right?) I had enough trouble getting flat surfaces, that I didn't want to over-complicate. Did you mail-order Parafilm? What was the minimum order?

Stefani -- I think it's not too late to graft apples. The next meeting of the local California Rare Fruit Growers association is this saturday...

One -- That's a good question! I think you're supposed to look at the tiny buds-to-be, and discern something-or-other. I'm such a newbie!
7:09 AM

Curbstone Valley Farm said…
Lisa, your whip grafts look great. I agree, the tongue part might be too complicated, we're doing ok with our wedges, but they're not all perfect LOL.

I did mail order the Parafilm. A fellow CRFG member recommended Harmony Farm Supply in Sebastopol as a local source, see http://www.harmonyfarm.com/

Just ordered a single roll (was about $5, but could do a LOT of grafts with one roll). Might be easier to call them though, their online ordering was a little clunky, but their customer service was great. I don't think there's any minimum order. Now I just need a bigger orchard! ;)
9:35 AM