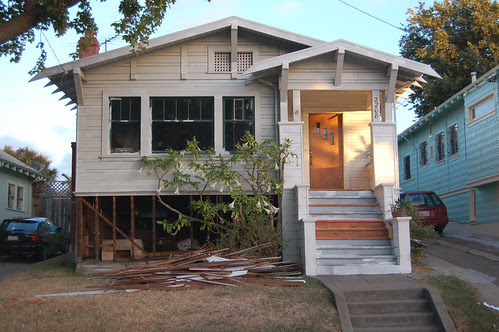 Back when we first bought the house, we had a lot of work done. I'll be blunt, the bulk of the work was badly done. Our contractors were nice enough guys, but they were about the slackiest corner-cutters ever to wield a skil-saw. These were the guys who busted all the windows, and severed the electrical service while replacing the roof on our garage.

These were also the guys who ripped off and demolished all of the old-growth redwood siding on our house, without our permission.

I haven't written about any of this, because it dragged out as an ugly slow-motion legal dispute, and I always think it's prudent not to discuss pending legal matters until they are resolved. Well, all of that is behind us now, and those idiots didn't make us agree to not talk trash about them. So I'm going to say it. They sucked. They were reckless and lazy. The workers milked this job for all it was worth, and the contracting company played fast and loose with the terms of the contract.

After promising to fix the mess the workers had made of our siding, the company eventually reneged on their contract, and then tried to take us to court. They walked away from an unfinished job, and left our house a pathetic eye-sore. When we refused to pay a final payment on the job they abandoned, they put a lien on our house. It was ugly.

But, as I said, this is all behind us now.

Robb and I have tried to be as "green" as possible in our house restoration, and also have tried to stay true to the house's original materials. When the contractors destroyed our redwood siding and offered a flimsy wood-textured concrete board as a replacement, I just about had a brain aneurysm. There's nothing on the contemporary market like the lumber that our house was built from. Even the woods that were considered "cheap" in 1925 construction are now prohibitively expensive on today's market. Neither Robb nor I wanted to buy an inferior product that would have to be replaced. We wanted our termite resistant, non-rotting, beautiful old-growth redwood. But the contractors had torn it off -- without our permission -- and reduced it to splinters on our front yard.

One of the mantras of "green" building is that the greenest house is one that already exists. During the restoration of our little house, we've tried to use existing materials whenever possible. We've managed to find salvaged (and historic) doors and windows and lighting fixtures. What's gratifying is that, if we shop carefully, and take our time, we often find antique items that are less expensive than the cheap crap at the Home Depot.

Today Robb called me at work and told me that he found our siding on Craigslist, and ever since then, I've been jumping up and down with glee. (My poor intern must be sick to death of listening to me go on and on about redwood siding.) Robb has been checking Craigslist every single day, and today was the day he got lucky. Our siding was for sale, down in Santa Cruz. (Those boring-looking photos are, to me, about the most thrilling thing imaginable -- the exact siding that we had lost.)

Since Robb cannot drive a truck to go pick this lumber up (he uses special hand controls to drive his car, and can't sit in any car for long periods of time), and since I have to be at work, and can't load a truck by myself anyway, we're paying a moving company to pick up the lumber and deliver it to our house. Tomorrow.

I'm so stupidly excited about this, and I'm sure our neighbors will be happy to see our house look less like a tar paper shack and more like the sweet old house that it ought to be.

And I'm beyond delighted by the fact that this lovely redwood siding, which almost certainly dates from the 1920s is a genuine bargain. Even with the cost of paying a moving company to drive it up from Santa Cruz, it is going to cost significantly less than any of the cheap crappy replacements that we couldn't bring ourselves to buy.

Now you'll please excuse me, because I have to go dance around the house some more. Squeeeeeee!
1925 cottage stuff we got on Craig's List

Unknown said…
Oh Hooray and Congrats!
Living in the Santa Cruz mountains, I've seen how amazingly the good, old redwood holds up. Nothing else compares. Kudos to you for holding out for the good stuff.
11:34 PM

Anonymous said…
FANTASTIC! WAHOO! Jezus god, you guys have been through the wringer, eh? Good thing you love your house and didn't get up and have to move out of it. I was wondering if they had removed the siding and sold it, since it is highly desirable. We had similar "issues" with the guys who we originally hired to fix the roof of our barn. Suffice to say, 5 months after our original phone call to them, we had someone else do it for less $ and with better materials. We fired our original guy for gross incompetance, among other things- I do believe I heard him literally shit his pants over the phone,as we left him with a very substantial bill for items we never wanted, never ordered, and did not need. Taking someone to court is unwelcome, but in this big bad world no one is afraid of you unless you lawyer up. It is surprising how many people roll over and let bad people walk all over them. Glad you stuck to your guns and got what you needed. Sorry it cost you more in stress, worry and money (possibly) than you anticipated. Get everything in writing and it always helps your case. Congratulations! When we had our barn roof finally replaced, I do believe I could have walked on the moon, I felt so high! This was after nearly half a year of us crawling up metal ladders in ice storms, rain storms, blizzards, and really gusty 50 mph winds to keep tying down the tarp with ropes and raw nerve. NEVER AGAIN.

Anonymous said…
Good news indeed, but I'm wondering if you'd like to name names or hint at names as I'd really like to avoid these guys.
12:08 PM

Christine said…
I can't wait until that Judge Judy episode, but more importantly, I can't wait to see your beautifully covered house!
1:54 PM

Curbstone Valley Farm said…
Lisa, I'm so sorry you had to go through all that crap. We're having work done to this house this spring, and the most nerve-wracking part was finding an honest, and decent contractor.

On the upside, YAY you found your siding. I almost cried last year when we helped friends demo part of an old addition on their house. The redwood siding must have been 3/4" thick. I begged them to reuse it, and we even came up with hair-brained ideas to build old-growth chicken coops, but before we could latch on to it...they simply threw it away. It broke my heart. You're right, you simply can't get that kind of redwood anymore.
2:05 PM

Anonymous said…
They do sell redwood siding milled to the specifications of your old siding. It is not the first growth wood you lost and therefore not as good as the replacement you got (both in wood and in green-ness). So congratulations on your fabulous luck but I imagine a court date might have gotten you newly milled, exactly matched, redwood siding (along with headaches and schedule issues). Alls well that ends well!
4:27 PM

Stefaneener said…
Hooray you both!! What a hunter Robb is!! yay and hooray! whee!
9:14 AM