It's how you look at it, I suppose 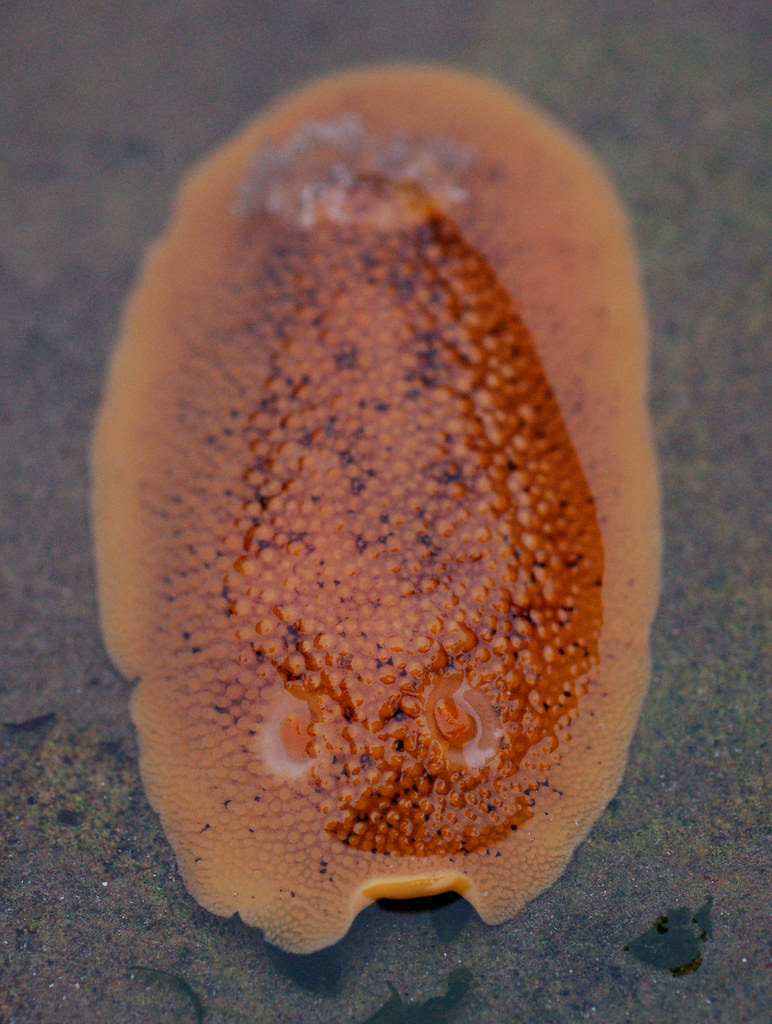 Doesn't Mister Sea Slug look grumpy? He was sliding along in the tide pools, south of Monterey on Saturday when we caught up with him. He really reminds me of a Halloween Jack-O-Lantern. 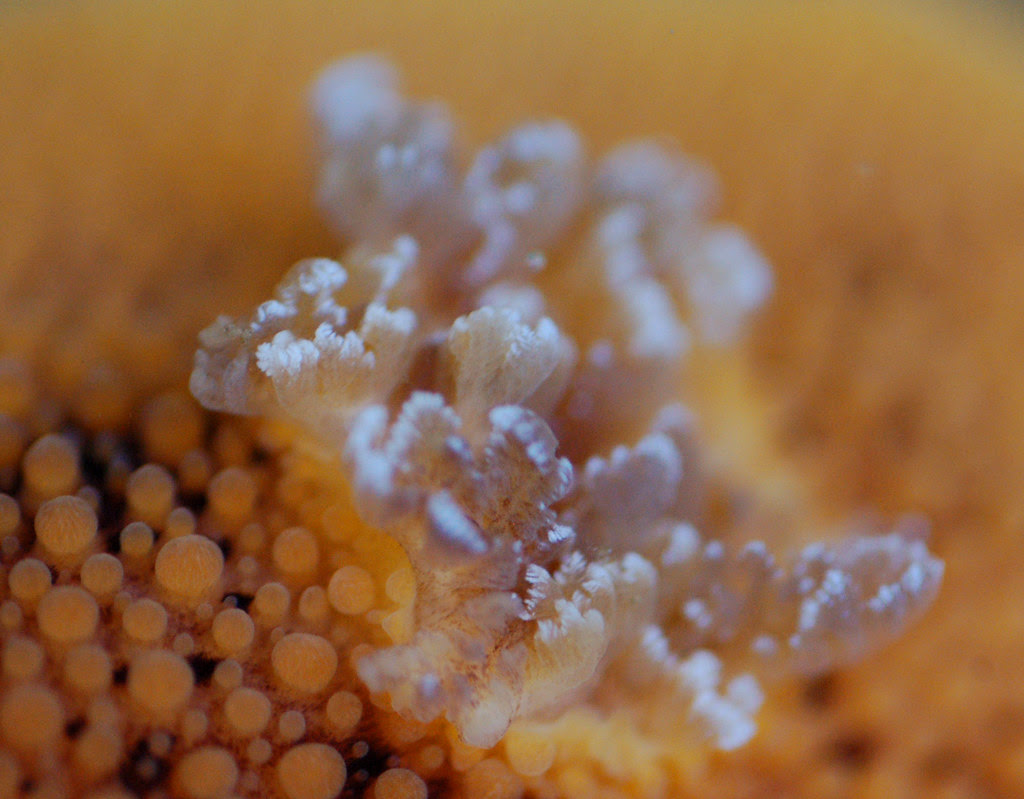 On the other hand, this close-up view of his lungs -- I mean butt -- I mean lungs -- well actually it's both, is really quite beautiful.

Sometimes I need to knock myself over the head, and remind myself that my world-view can be radically changed, just by altering my perspective.

Take this past weekend's snorkeling expedition. We had been invited along on what seemed like a brilliantly organized slug-hunting-outing, with a group of Super Cool Science Nerds. I was in heaven. We would be exploring the alien landscapes of the Monterey Bay with people who actually knew what they were doing. They gave us recommendations for where to rent all our gear (which was surprisingly inexpensive!) and mentioned going out to eat after snorkeling.

So, Robb and I shoveled ourselves into 7mm thick wetsuits* and drove to the dive site. In our suits. I don't know how big women do it. I'm skinny, and I was wearing a large suit, but sitting in it compressed my innards in an unpleasant manner and made me really nauseous.

Now, I'm pretty sure that the prudent thing to do when snorkeling is to not swim alone in unfamiliar water. But that wasn't going to be a problem, because our friends were old pros. Except that when we got to the meeting spot, they weren't there. We stood around in our wetsuits, feeling like idiots and wondering what to do. I asked everyone on the beach if they had seen any snorkelers, and tried to reach my friends via mobile phone.

Finally, after about forty minutes someone started shouting at me from a boat. It was our friends, who had gone off scuba diving with another group of people, and totally lost track of time. Instead of swimming to shore, they told us that they were going to boat off, and go get their car, and they would see us later.

I was pretty freaked out, but after some discussion with a nice underwater photographer, I convinced myself that we could probably swim, if we were really careful and didn't take any big risks. So, Robb and I slogged our way into the freezing cold Monterey Bay and snorkeled all by ourselves.

Robb's fins were worse than useless, because he can't use his legs when he swims, and they just got in his way. Robb had to have the woman at the dive shop carefully check over the fit of his fins, because of course he couldn't feel his feet. He should have skipped the fins, altogether, and rented webbed gloves.

The visibility was terrible**, and not unlike swimming in a leaf pile or salad spinner, because of all of the lose-floating vegetation debris. Robb and I couldn't spot each other underwater, and had to keep surfacing to find each other. We weren't clear on the currents or safety issues regarding the rocks. 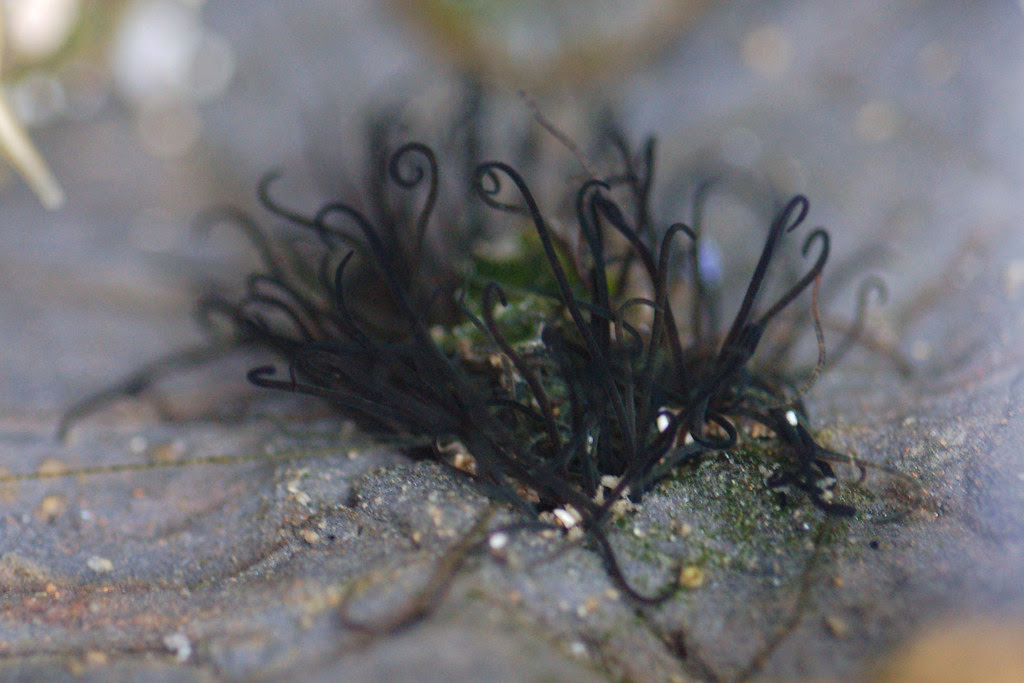 When our friends finally arrived, they were all stoked to snorkel, and we were done with the whole thing. So, no hanging out. No lunch. No nothing.

What should have been a really fun day put me into a horrible upset mood. Robb was in a lot of discomfort. I felt blown-off by the fellow slug-seekers. I've been under a lot of stress, and this was just more than I could absorb. I totally lost my cool, and alternated between sulking and crying in the bathroom. It wasn't pretty.

But somehow, it seems, Robb managed to see the other side of things. He saw the good, while I was tearing myself apart.

We did snorkel, which has been a secret goal of ours since he broke his back.

I think that because I had been dreaming about returning to the ocean for such a long time, there was almost no way that the day could have lived up to my expectations. Of course, transforming into a miserable Hose Beast doesn't exactly live up to my best expectations, either. I get so weird about Really Important Events, and become a person I hardly recognize. I don't like this person much. She needs to chill out. 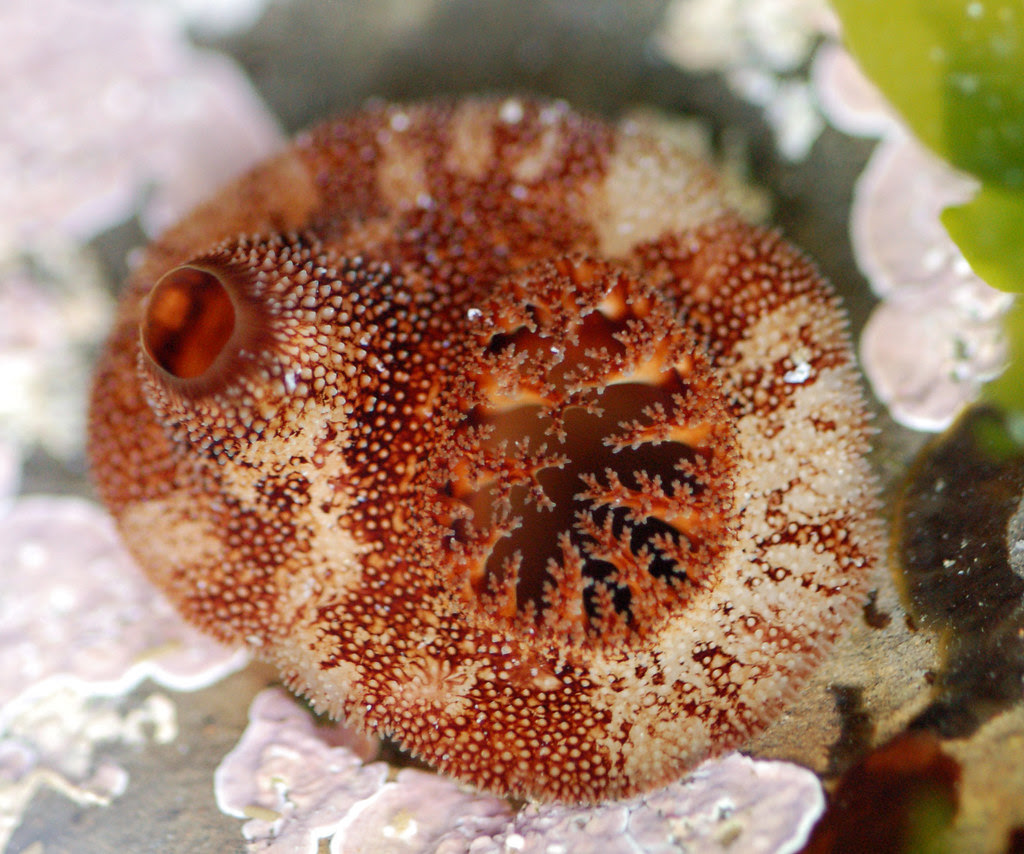 I have to say that I was taken aback when I read Robb's blog post, because I thought the outing was an unmitigated disaster, and he sounded so happy and upbeat about snorkeling.

He's right, of course. And it's all how you look at it, I suppose. I know that I looked pretty silly, peeling myself out of my wetsuit in front of all those tourists. I just need to remember to laugh at myself. 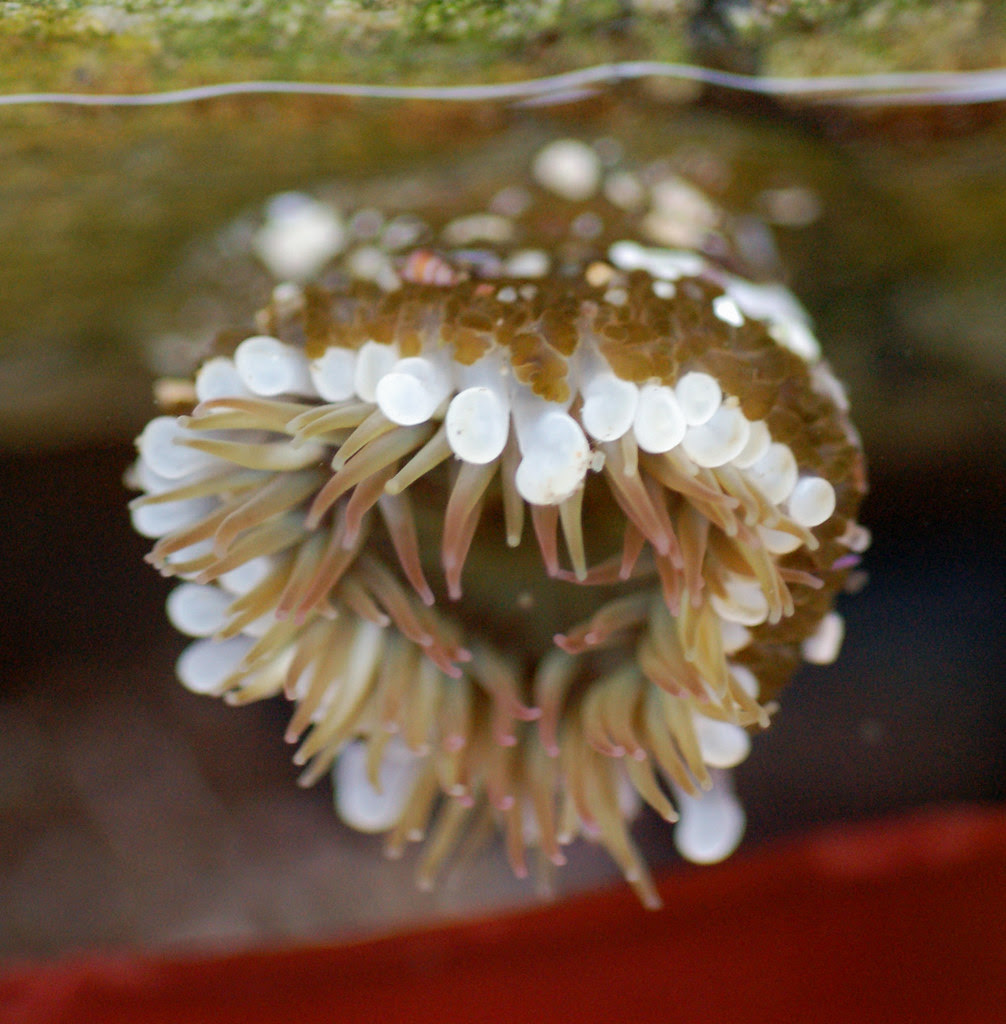 * The Monterey Bay is such an ecological wonder because of its proximity to the drop-off of the Continental Shelf, and the upwelling of nutrients from deep in the ocean into the Bay. Oh yeah, and those upwelling waters? They come from 3,000 feet below the ocean's surface, and they're really really cold!

** All these photos are from Saturday's tide-pooling, not Sunday's snorkeling.
Lisa freaks out AGAIN ocean

Anonymous said…
Bet you and Robb could have a great time snorkeling in a landlocked lake in the Bay Area - no tides to worry about and somewhat warmer water to help you get back into the swim of things.

Unknown said…
I'd have to agree with you about your group - it was thoughtless in the extreme to just take off having agreed to go with you. However, because of their bad behavior you know that you and Robb can go out snorkeling on your own, which you still would not have known if they had helped you along as planned. So sorry that your day was so difficult, but happy you got to snorkel after all.
4:18 AM

Marissa Dupont said…
I would've been just as pissed as you were, you had every right to be mad! Nonetheless, you achieved a goal and you went out and did something instead of say, watching TV all day. :) And now that you've done it, you'll know better what to expect next time and maybe you'll have more fun then! :)
8:32 AM

Anonymous said…
Are you kidding me?

I have some of my best moments as a miserable hose beast!

Actually, there ARE times when I am simply ASTOUNDED at my emotional range, which goes from 0 to 100 in about half a mili-second. It's all a part of the joy of being a female, I guess.

Let me tell you about something that happened last year. A guy drove into a stone wall quite close to our house. I ran to help the guy, and was worried to death he had killed himself or become injured. I was completely consumed with fear and concern for this person.

When I saw him get out of his seriously smashed up truck and trailer, his first words were " I fell asleep, the beer doesnt help."

Well, my emotional attitude changed INSTANTANOUSLY and I screamed at him- "You ***hole! You could have hit my house!"

So, don't worry about the hose beast- she raises her head from time to time, and we all know this persona. It happens. Just be glad you didnt hit my house.

By the way, I am very jealous you guys got to go snorkling!

Anonymous said…
I ususally call it letting the bitch off leash. She has a good time and then disappears, leaving me to clean up the mess.

I would be very upset with the "friends" that stood you up.