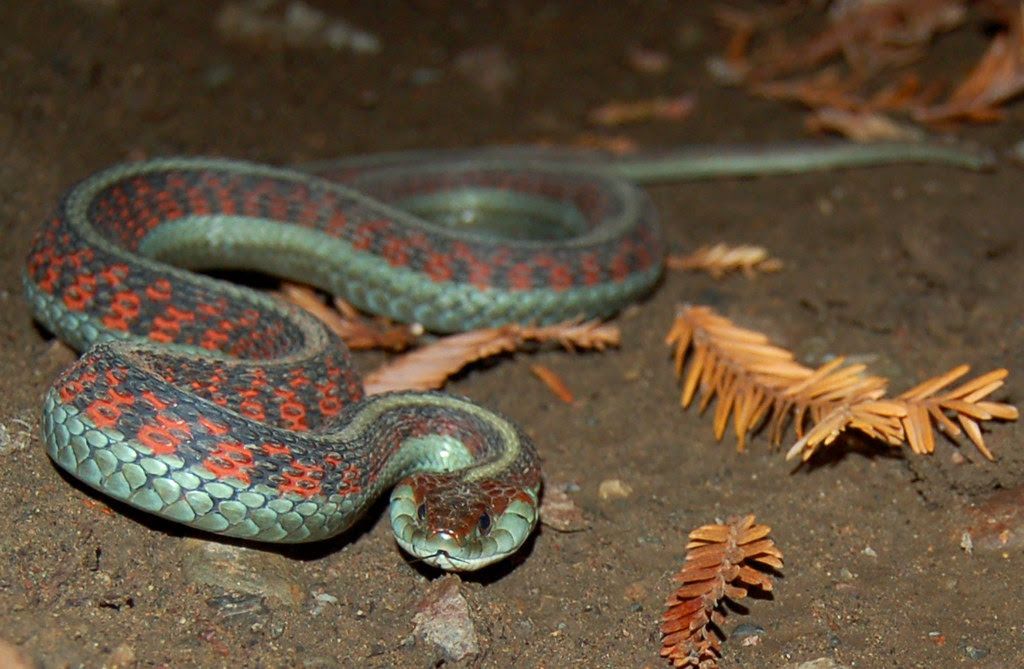 There have been so many stories to tell from last weekend's ride, but I've been really distracted, and have had a hard time collecting my thoughts.

So, I'll just share a little bit at a time. Up first -- our Weekend of Blue Reptiles.

After Robb and I completed our 25 mile fundraising ride, I got a massage (never long enough), and we had some lunch, and hung out with the other riders. I was chatting with one of the hand-cyclists who had been on our ride, when a bunch of kids came racing up to him. They had found a snake, and wanted everyone to know about it. Any regular blog reader will know what happened next. I had the kids show me their snake. How three kids in wheelchairs found a snake hiding behind some furniture-moving dollies is a bit of a mystery, but as they say, kids will be kids. 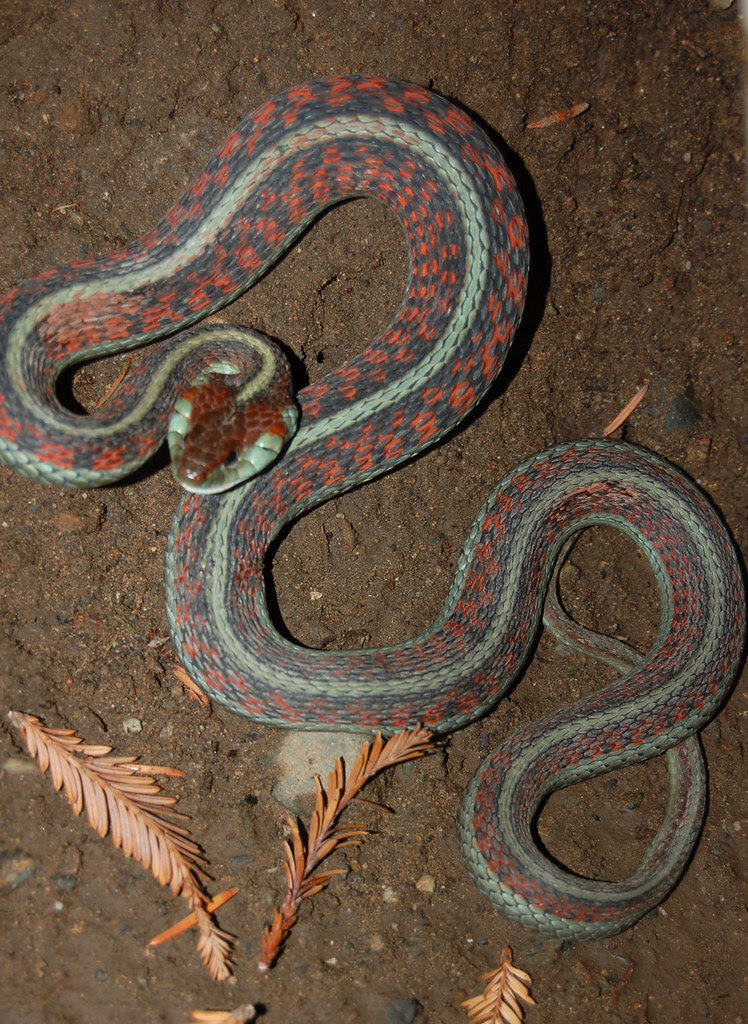 I know next to nothing about snakes, but I know that when you see a snake with prominent jowls, you had better pay attention. The snake was pretty agitated, and the kids admitted that they had been throwing rocks at it. This seemed like a bad idea, for all parties involved. The kids and I talked about how the structure of the snake's head might mean that it could be poisonous, and how, furthermore, if they told every adult at the party about the snake, someone might freak out and decide to kill the animal. We agreed that we would enjoy the snake at a distance.

I posted these photos on Flickr, and my online nature pals informed me that this was a (mostly) harmless* California Red-Sided Garter Snake, but a very, very, very angry (mostly) harmless snake. Apparently, when these snakes feel threatened, they puff their heads up, mimicking venomous snakes. None of my herp' friends had ever seen this species of snake so angry, and one even asked if it hadn't had its head smashed. (The snake was unhurt, and skee-daddled when nobody was looking.) I have to say, I was fooled by the snake's behavior. I was pretty sure that this snake actually was poisonous, and gave it plenty of room. I did admire it splendid coloration, especially its celadon belly. What a beauty. 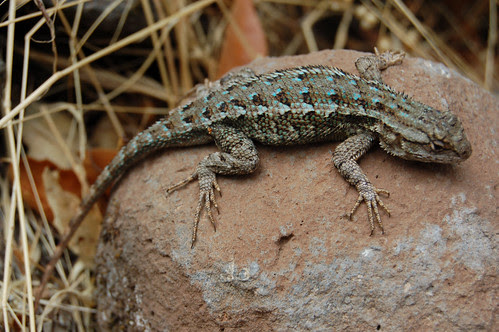 The day after the ride, Robb and I did a little bit of letterboxing, and found ourselves at the Paradise Ridge Winery's outdoor sculpture garden. It was a picture-perfect late-summer California day. The sun was bright, the sky deep blue, and the lizards were scampering on the rocks that bounded the paths through the wooded sculpture grove. I'm a little ashamed to say that we spent as much time looking at the lizards as we spent looking at the art. These Western Fence Lizards are awfully pretty. And some of them had incredible colors. 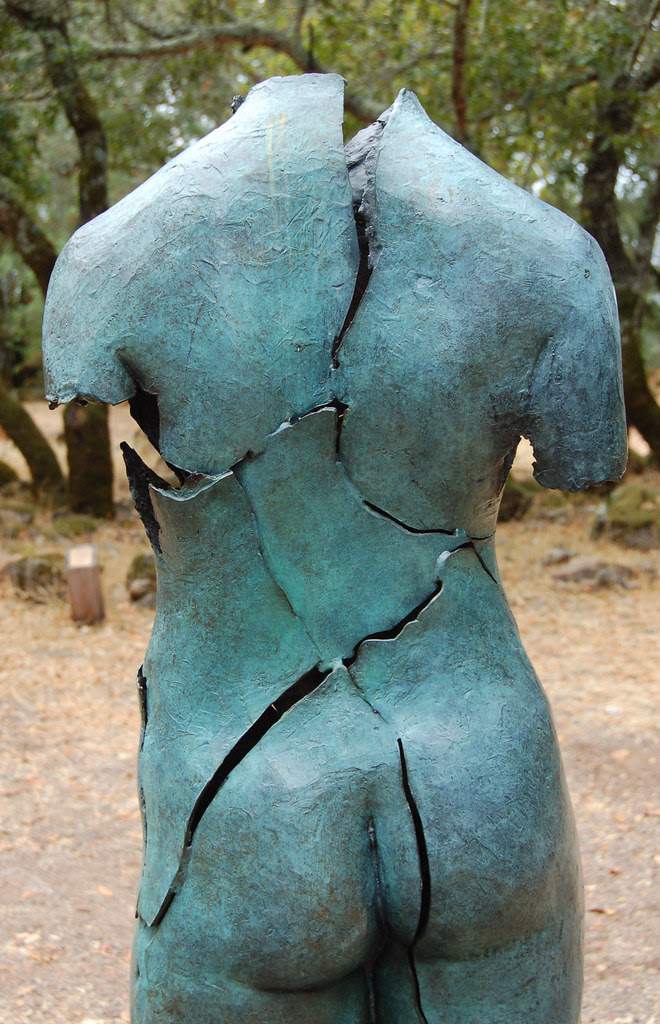 Even some of the art was blue. I took very few photos, because I had forgotten to pack my camera's battery charger, and had almost no juice left, but this sculpture really caught my eye. Obviously, I would take special notice of a figure with a broken back. What seemed to poignant to me was this: even though Robb walks with difficulty, and found the uneven ground in the sculpture grove challenging and even painful, we were still out there. We may not be swift, the route may not be easy, but we're out there, nonetheless.


*Garter snakes have toxins in their saliva which can be deadly to their prey and their bite might produce an unpleasant reaction in humans, but they are not considered dangerous to humans.


Blogger seems to be cropping my photos strangely today. Can y'all see the entire face of the turquoise backed-lizard? His nose is chopped of on my computer, and it shouldn't be.

art letterboxing lizards saying Thank You by giving back snakes

Marissa Dupont said…
The lizard's nose is clipped on my computer too. What a gorgeous snake! I really hope those kids took you seriously and won't throw rocks at snakes anymore.
4:32 PM

Anonymous said…
I've never seen that kind of garter snake before either. Nice find! That lizard is beautiful!
10:12 PM

Anonymous said…
nose is off in my photo, too!, but great of you to teach the kids about wildlife!
the photo of the sculpture is great-
Ruth
3:22 AM

Pockafwye said…
What beautiful photos of these critters!
8:06 PM