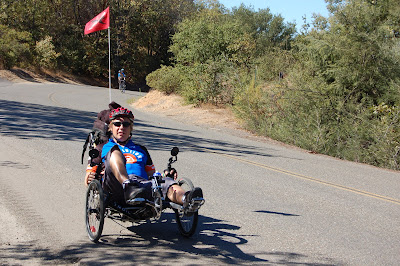 Another short ride recap. (It's Monday. Saturday was the ride, and Sunday I worked until 1:30 in the morning.)

Nature could not have given us a more perfect day for the BORP fundraising ride. Gloriously sunny with a light breeze and not a hint of humidity or showers. The landscape was gleaming, with grape leaves turning autumn colors, and the smell of ripened grapes in the air. As we rode out of the vineyard at the start of the ride, I turned to Robb and said, "It smells like yellowjackets." And he knew exactly what I meant.

The event was perfectly organized, and oh-so-fun. The roads were quite good, the support vans were never far away, and if we so much as stopped to put on some chapstick, someone would instantly pull over to see if we needed anything.

It was, however, a hard ride.

Despite the condition of her injured hand, Kara decided to ride with us, after all. She's moving to North Carolina next week, and realized that she would regret passing up a chance to do a fully supported bike ride through Wine Country.

Ellen had spent the day before the ride violently sick with food poisoning or a stomach virus, and she still rode. The bike she rented turned out to be a worthless clunker, and our "guest bike" wasn't properly tuned up. She has shifting issues and threw her chain. (Robb threw his ninety-some-inch chain as well.) At one point, we stopped to wait for Ellen, and I got rather worried. When she and Kara caught up, Kara gleefully announced that the reason Ellen had been lagging was that she was tasting the wild grapes along the side of the road. Yeah Ellen! That's why she and I are such great friends!

And, as far as those twenty five mile? The ones we didn't think we could manage?

Well, it turns out that due to the geography of the course, there really wasn't a twenty five mile course. At the sixteen mile mark, we had to decide. Turn right and cycle a total of twenty miles, or turn left, and do thirty.

YEAH BABIES!!!!!! YOU KNOW WHAT ROBB AND I DID!!!! WE CYCLED THIRTY MILES, EVEN THOUGH WE HAD NEVER GONE THAT FAR BEFORE!!!!

I have to say that the last part of the ride just about killed me, and only sheer stubbornness got me through. The course started and ended with a gigantic hill, which Robb went down at a staggering thirty-five mile per hour at the start of the race. On the way back? He chugged up that hill at three-and-a-half miles per hour. I got off and walked my bike, which was agonizing in a totally different way than the rest of the ride. We won't talk about the silver haired gentlemen who blew past us on the way uphill.

Perhaps the best part of the actual riding (and there were a lot of wonderful parts) was the very very end. I was exhausted. Whipped. Done. I was stubbornly plodding along, thinking about washing my face, and having that post-ride massage, when some of the riders who were completing the hundred mile ride roared past me. First came a group of women going top speed and chatting merrily.

And then this man zoomed past. He was going faster than anyone I had seen all day, and putting in a huge muscular effort. And he called out the cheeriest greeting as he left me in the dust. "Hey! How's it going? I'm Alejandro."

He put the biggest grin on my face! 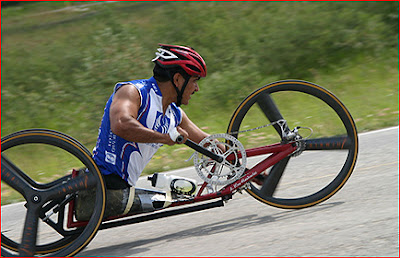 bike friends saying Thank You by giving back

Gina said…
O.K., I'm all weepy and happy and inspired and proud now! Do you have any idea how fierce and fantastic you all are?!?!?

You. Rock.
It. Rocks.
EVERYTHING Rocks!

Thank you so much for sharing it all with us so beautifully
11:10 AM

Anonymous said…
Congrats you guys, that's so awesome! I'm so happy and proud for you, I got little tears in my eyes too!!! I knew you could do it and I couldn't wait to find out today!

Anonymous said…
Way to go. I know damn good and well I couldn't have done it. Congrads to both of you. What no boxes along the way (kidding)

The Currey Family said…
One of my students was hovering while I checked the news today at lunch, and he said Robb had a cool bike. Congrats and wows abound! Thank you for an addition to the Inspirational Stories of People I Know genre.
8:32 PM

Anonymous said…
Wish we could have been there with you, congratulations!

Anonymous said…
fabulous job!! I continue to be inspired, and congratulate you on your glorious completion of event day! You've raised 286% of your fund raising goal, WOW.

Anonymous said…
I'm so excited about this!!! I love bikes, I love you guys, and combining them both makes for explosive amounts of awesome!!

Thirty miles is SO amazing, I love distance riding! You finally get a grip on how one really could travel the earth without gasoline or electricity. Just you and your legs! And the fact that Robb has been able to do such a thing despite overwhelming odds is so inspiring. I brag about you all the time to my bike friends!

You guys keep on keeping on- next goal: 50 miles! I've only done 40, and you've sparked me into trying for farther!

Anonymous said…
You guys kill me. I cant walk around the block without wanting my butt rubbed. More on that later.

VERY WELL DONE on the ride. We are proud of you guys, even if you pooped out on mile 1, which is what I would have done. I would be blaming my lack of energy on the 96 degree weather. And the Beer. Possibly all the cigars as well.

Anonymous said…
that is so super awesome, congratumalations!!! i'm very proud of you guys and so glad you did it!
10:59 AM

Anonymous said…
The Baltimore marathon is this morning and the first "runner" through was on a recumbant trike!
5:13 AM