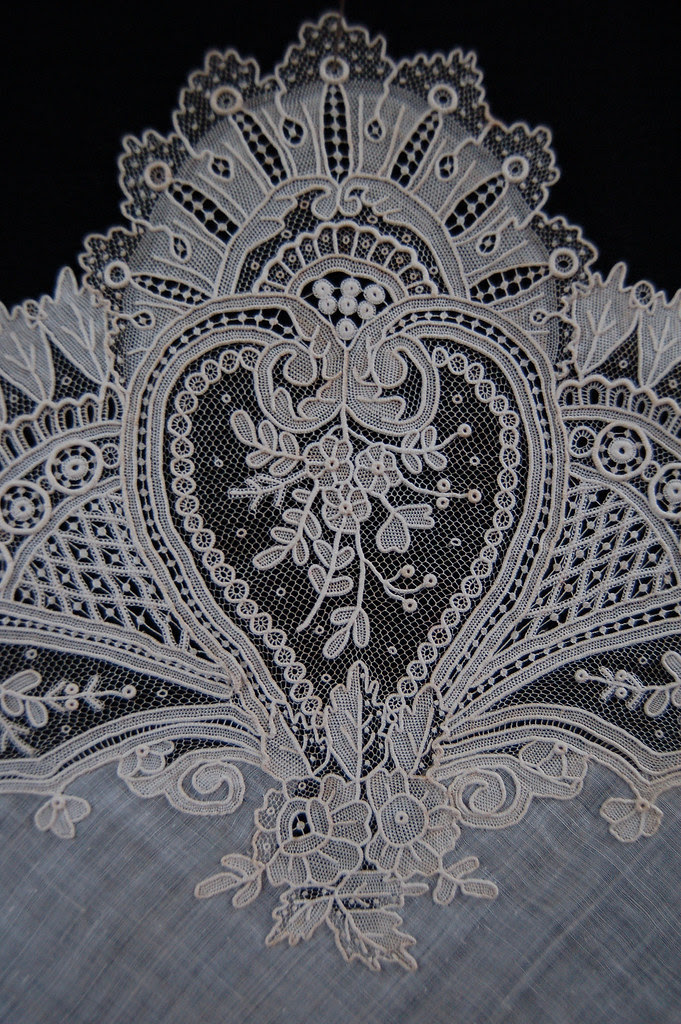 I make things by hand, professionally. And one of my great pleasure in life is learning about the things that other people make or made.

Last night, Sheri and I worked until after midnight, painting the stage floor, and then we were back at work, bright and early, to continue with painting tasks. Once the carpenters had finished their on-stage notes, they were going to build a few new pieces of scenery, but there was going to be a bit of a lag-time until we could paint these things. We had some time on our hands, we were really tired, and we needed a treat.

So Sheri and I took a long lunch and used the time to visit the Lacis Museum of Lace and Textiles in Berkeley, where they were having shows of knitted lace and also something called Needle Lace. In this technique, artisans take single strands of linen fibers (significantly thinner than a human hair) and essentially "embroider the air." Every part of the lace is created by the lace makers. The tulle netting that holds everything together would have been laboriously sewn together, by candle or lamp light.

It is hard to grasp the scale of these pictures. But let me try to offer some orientation. The top photo is of a corner of a Nineteenth Century hand made lace handkerchief. Clearly, this was never meant for and of the prosaic tasks that a humbler handkerchief might be expected to perform.

Do you notice how there is a subtle shading along the top arch shape, just below the circular forms? We learned that this was achieved by varying the diameter of the linen fibers. Can you imagine? Who has eyes sharp enough to discern the variation in a single strand of linen? You can see a detail of this shading in the second photo. It is worth scrolling back up, to compare these two images.

The third photo shows a close-up of the mesh structure of this type of lace. This reminds me of hand made fishermen's nets, only in a microscopic scale.

We had walked through the museum with one of the curators (what a pleasure) when the gentleman who owns Lacis came in and gave us a personalized interpretation of the collection. We spoke about the social and political aspects of the production of this form of lace. He showed us one example in the show in which any square inch of lace would have been made up of ten thousand individual stitches, all done by hand. That particular piece was known to have take forty years to complete.

From the vantage point of our society which puts so much value on "fast and cheap", it is hard to fathom a world in which such an object could be created.

This piece was made for the court of Louis XIV, by court lace makers brought to France from Italy. Click on any of the photographs for more detail.

This is a piece of Venetian lace that would have been made about the time Elizabeth I was on the throne in England, and members of the aristocracy were wearing those huge lace ruffs.
art knitting

Anonymous said…
I zoomed in on the last one and you could even see the nose on the figure. Hard to believe the pride people took in getting the smallest detail right.
2:45 AM

Jen said…
ahhh, isn't that an awesome tour! the owner was who gave us our tour a week or so ago.

i noticed you were fascinated with the same handkerchief that i was. you even posted a very similar photo to the one i led my blog post with *g*
8:49 AM

Anonymous said…
Hey there- I was looking at all the photos and was struck with a bit of Catholic Trivia at the same time. Saint Theresa's mother went blind from being a lacemaker in her late 20's I believe, and then starved to death. Then the father packed all his 5 daughters off to a convent so that they would get something to eat. Thats about all I remember from Catholic church camp and "the little flower's" family story, since it was art related and worth remembering. Lacemakers may have made beautiful things in the past, but I tend to believe their lives were often bitter.

Anonymous said…
I was just thinking of old lacemakers today as I attempt to mend a torn scrim as best as I can... sigh. Lovely pictures, and god what misery that must have been...

Anonymous said…
One of my friends and I visited this museum in June. It was fantastic. In July, I went to Italy with my darling hubby and we visited Burano where they still make the beautiful hand made lace. It takes seven women to make one piece of lace because they use seven different stitches in Burano lace and each woman specilizes in just one stitch. It's a dying art because the young girls don't want to learn it. They also had a lace musuem at the shop where I bought a piece of lace and they had lace dating back to the 1500's. They even had an antique lace wedding gown. Really facinating!
redhatqueen
4:59 PM

BeanMama said…
Gorgeous!! So glad you made it -- I didn't even think to ask about the needle lace, that's amazing.
6:32 PM

Anonymous said…
"That particular piece was known to have take forty years to complete."

Now that is patience I don't have! I can hardly wait to finish knitting a pair of mittens... I've never even bothered making a sweater for myself.

These are beautiful pictures. Thanks for sharing
10:29 PM

Unknown said…
Absolutely stunning. Stunning in the visual sense and stunning in the realization of hours/lives spent. Such irony, since that breathtaking piece of work is made to hold the tears of others...

. . . Lisa and Robb . . . said…
The socio-economic aspects of these objects were of as much interest to me as their construction.

The person who wore these would literally be wearing their social status on their sleeve.
1:40 PM

Anonymous said…
As incredable as these peices are, what gives me an even bigger smile is YOUR amazement of them. I couldn't count the number of times I have been shown something on your blog that, left to my own devices, I would never have seen let alone marveled at. Now, I find myself watching for birds and scrutinizing details that have always been before me but 'hidden' in my "big picture" mentality. Thanks to you both for sharing your interest in our world.
~~Doublesaj~~
1:17 PM