October 29, 2007
We talk a lot about balance on this blog. Partially, because with Robb's diminished sensation and strength in his feet, he has to work extra-hard to maintain his balance, and also because it is a good metaphor for our lives.

We try to strike a balance between pushing ourselves to our limits, and not over-exerting ourselves. Or between acceptance of our situation and total denial. You get the picture.


PHYSICAL
Robb had been sick last week, with what was probably some kind of flu. Spinal cord injury notwithstanding, Robb is amazingly healthy, and almost never gets sick. (The fever he had right after the fundraising bike ride was related the the urological stuff that he's dealing with as a result of his injury. This is part of the things we have to learn to "manage.")

I get a lot of small colds, probably because I have bad allergies, and my respiratory system is under stress. Robb almost never gets sick, but when he does, watch out! The funny thing is that while he has been completely levelheaded during his convalescence from the spinal cord injury, Robb is an IMPOSSIBLE patient when he gets the flu. He suffers from all sorts of feverish illogical thinking, and sends me out hunting for medicines from the Nineteenth Century. The nice urban pharmacists at the chain drug stores shake their heads, and call what I'm looking for "old school."

We did manage to find one of the patent medicines that he was seeking at the home-town pharmacy in Point Reyes Station. Of course, by that time, Robb had his appetite back, and was back on his feet. 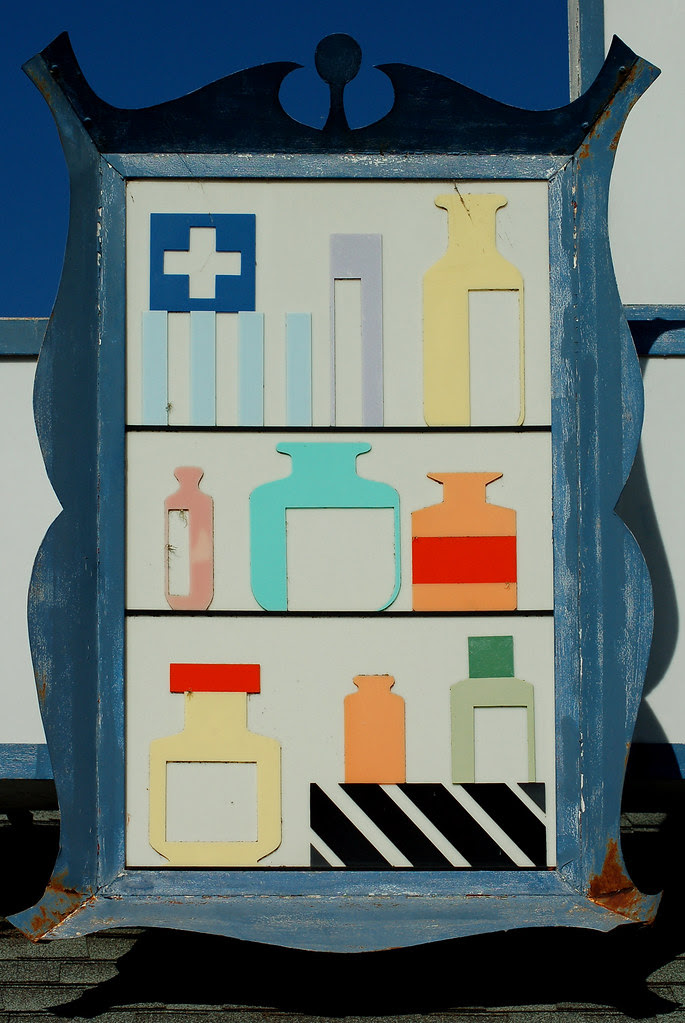 SPIRITUAL
As far as the bigger issues are concerned, I think that Robb has found that perfect balancing point. He never dwells on any of the negative aspects of his condition, except as something to be overcome. I have never seen him lose his cool, since the accident. I know I use this word on the blog a lot, but Robb is AMAZING. Although he has every right to, he never wallows in misery, and seems completely devoid of bitterness or regret.

The fact is that for us, dwelling on the negative has no value. So, we embrace the good things in life, and work to minimize the bad.


AND ALL THE REST
Because Robb cannot feel the fronts of his feet, and doesn't have much strength there, his balance is off. His brain keeps telling his body that Robb is and about to fall over, and it takes some real effort to over-ride this message.

But things are improving, either physically, or because Robb is learning to "sass back" at his persnickety nervous system.

The first few times that Robb and I went out to look at birds last year, he couldn't look through binoculars because something about obscuring his field of vision totally screwed up his balance. If he wanted to look at a bird, be would lean his entire weight against me, and take short glances through the lenses. That was fine with me. I liked the intimacy of it all. Likewise, my style of camera (you have to look into the eyepiece, instead of composing your image on a miniature television screen) makes Robb go off-kilter.

Because of this, I end up shooting most of the photos on the blog.

Until yesterday. Robb realized that if he dug his cane into the sand, and leaned his leg against his stick, he could take pictures. He figured that if he was on stable ground, and not sand, this would be a lot easier. Nice to know that he's regained more of his balance.

So then, here are some photos by Robb.

We bought a kite, but when we got to the beach it wasn't windy enough for kite flying. So I went back to the car and fetched my knitting. I had a silly notion of holding the end of the yarn, and launching my project into the air. 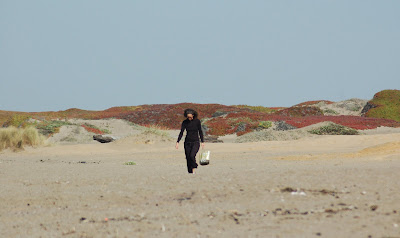 Eventually, the wind picked up. 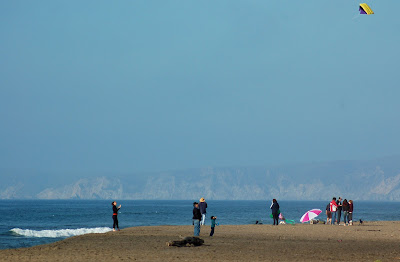 At which point, this gull grabbed my knitting, and started dragging it down the beach. Anonymous said…
PLEASE let us know what sort of Victorian Medical Oddities Robb's fevered brain has requested. I love that sort of stuff! One of my favorite old time paints to find at decrepit yard sales is mummy black (made from, yup you guessed it) ground up mummies mixed with linseed oil. Share with your inquiring public what Robb wanted, and perhaps this Halloween we will find some of these things on the market.

PS- the local walmart is already sold out of dehydrated human heads, sorry...

Signed, yours in the Halloween spirit-

Anatomically-incorrect Annalisa and Grusome Gary
11:57 AM